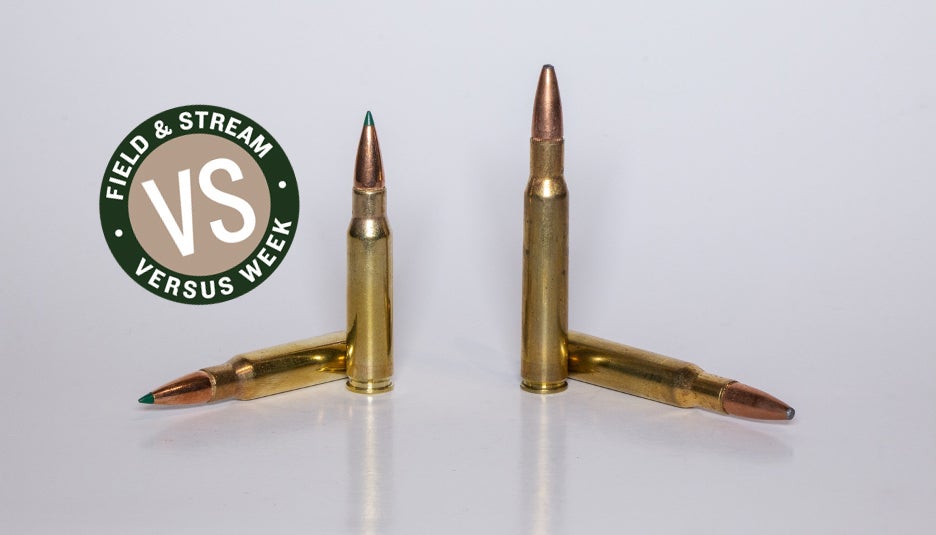 The .308 and the .30/06 are two of the most popular big-game cartridges in the world. Richard Mann
SHARE

When it comes to cartridge comparisons, the .308 vs .30/06 is one worth investigating. It is also a comparison deeply influenced by emotion. Many hunters grew up with grandfathers and fathers who trusted the .30/06. It was the cartridge that helped many come home from war; it saved their lives. The .30/06 has been praised to the point it is now an icon, and those who question its greatness are considered heretics. At the same time, the .308 Winchester has a solid connection to post Korean War veterans and a well-established reputation in precision rifles. So, the key to sorting out the .308 vs .30/06 debate should be to separate the assessment from all emotion and focus on nothing but fact.

This cartridge got its name because it fires a .30-caliber (.308-inch diameter) bullet and was introduced in the year of 1906. The cartridge and the Springfield rifle were issued to American servicemen, and together they won WW I. Before WW II, the Springfield bolt-action rifle was replaced with the M1 Garand, and that rifle and the .30/06 helped our troops win yet another World War. The original .30/06 ballistics allowed for a 150-grain bullet to be pushed to 2700 fps. In the first decade of the 20th century, this qualified as an extreme high-performance cartridge.

How far can a .30/06 shoot? Well, with those ballistics, it can push a bullet beyond two miles.

The ballistics of factory .30/06 ammunition is much better today. One of the flattest shooting modern .30/06 loads is the Precision Hunter load from Hornady. It will push a 178-grain bullet to about 2750 fps. If sighted in at 200 yards, the bullet will only fall 44.3 inches below the line of sight at 500 yards. And it will still deliver 1533 foot-pounds of energy at that distance. After WW II, similar ballistics made the .30/06 very popular for hunting and when new bolt-action sporting rifles were introduced, they were almost always chambered for the .30/06 Springfield first.

Looking for a shorter cartridge with similar ballistics to the .30/06, the U.S. Military developed the .308 Winchester in the early 1950s. With the advancements in modern propellants of that time, the .308 or 7.62x51mm NATO, as it is often called, allowed for near .30/06 performance out of individual and crew-served weapons that were shorter and lighter. The .308 and the M14 replaced the .30/06 and the M1 as America’s military service rifle. Since then, the cartridge has served our troops in various machine guns, the SR25 semi-automatic rifle, as well as in various bolt-action sniper-type rifles. The .308 Winchester also became very popular for big game hunting.

The primary physical difference between the .30/06 and .308 is the size of the cartridge case. The .30/06 case is 2.494 inches long and the .308 case is 2.015 inches long. Like with the .30/06, one of the best ballistically performing factory loads for the .308 Winchester is the Hornady Precision Hunter. It will launch a 178-grain bullet to about 2600 fps. With a 200 yard zero, this bullet will fall 50.2 inches below the line of sight at 500 yards, while retaining 1346 foot-pounds of energy. Even though the .30/06 case is about 24% longer than the .308 case, from an external ballistics standpoint it only offers about a 6% increase in velocity. This is in line with the rule that velocity increases at a rate of one to four in relation to case capacity.

When comparing the .308 to .30/06 performance, the best tool we have is external ballistics. Given bullets of the same weight, such as in the Hornady Precision Hunter load, the .30/06 will hit about 14% harder and shoot about 14% flatter. However, this advantage in energy on target and a flatter trajectory is offset by more recoil. Out of an eight-pound rifle, the .30/06 will, on average, will recoil about 14% harder than the .308. This may or may not matter to the shooter, but around 20-foot pounds of recoil, which is common for the .308 Winchester, has been found to be about the upper level of comfort for many shooters during sustained fire.

Some will argue that in the .30/06 vs .308 discussion, the fact that the .30/06 will work better with heavier bullets, like those weighing 220 grains, must be considered. Back in the day of poorly constructed bullets, that did give the .30/06 an advantage because the slower 220-grain bullets would hold together better and penetrate deeper. Now, however, with bonded and mono-metal bullets, the heavier 220-grain .30/06 bullet will perform no better than a 168-grain bullet from a .308 Winchester or .30/06. In fact, at 300 yards a 168-grain Barnes TSX bullet fired from a .308 Winchester will perform as much as 15% better in terms of velocity, energy, and trajectory, than will most 220-grain bullets fired from a .30/06.

When comparing the .30/06 vs .308 for hunting, we must also look at terminal ballistics. Keep in mind that both cartridges utilize the same diameter, weight, and style of bullets. So, the only difference between the two—from a terminal performance standpoint—is the slightly faster velocities the .30/06 offers. However, if you think there’s an animal or a forensic pathologist who can tell the difference between a wound created by a .30/06 and one created by a .308—when the same bullet is used—you’re a fool.

Yes, given the same bullet, the .30/06 will shoot harder and the bullet will fly flatter than if it were fired from a .308. However, the difference is so minuscule that, inside 250 yards or so, it is indistinguishable from a terminal performance perspective. On the other hand, if you’re shooting at extreme distances, you can reach a distance where the .30/06 does have an advantage. This is best illustrated when it comes to the minimum velocity needed to initiate bullet expansion. A modern mono-metal bullet like the Barnes TSX needs to impact at about 2000 fps to deliver optimum expansion/deformation. If we compare a 168-grain TSX from a .308 and a .30/06, the bullet fired from the .30/06 will deliver reliable bullet upset out to about 400 yards. The .308 Winchester however will run out of the velocity needed for reliable bullet upset at around 350 yards.

Read Next: The 12 Best Cartridges for Elk Hunting

And The Winner Is

When it comes to the .308 vs .30/06, and ballistic performance is what is being compared, the main difference is that the .30/06 offers about 50 yards or so more reach. But that 50-yard advantage in reach, which—depending on the bullet used—only begins to become relevant at around 350 yards, you’ll have to suffer through about 14% more recoil. Additionally, when comparing rifles of the same type, a .30/06 rifle will weigh about five to eight ounces heavier due to its longer action.

All things considered, when it comes to the .308 vs .30/06 for hunting, the .30/06 has a slight ballistic advantage that’s offset by slightly more recoil and a slightly heavier rifle. Both cartridges are suitable for all the non-dangerous game animals all over the world, and no metric exists that can differentiate between which one will kill better than the other. Of all the cartridge comparisons we might make, with the .308 vs the .30/06, the facts are so similar that emotion might actually be the most important consideration. You need to like the cartridge you hunt with and for most hunting situations there’s just not enough ballistic difference between these two to really matter. Pick the one that makes your heart beat the fastest, comes in the rifle you like the best, and don’t sweat the little stuff.