If you want a semiauto that's reliable, light and trim, and versatile—look no further than the Benelli Super Black Eagle 3 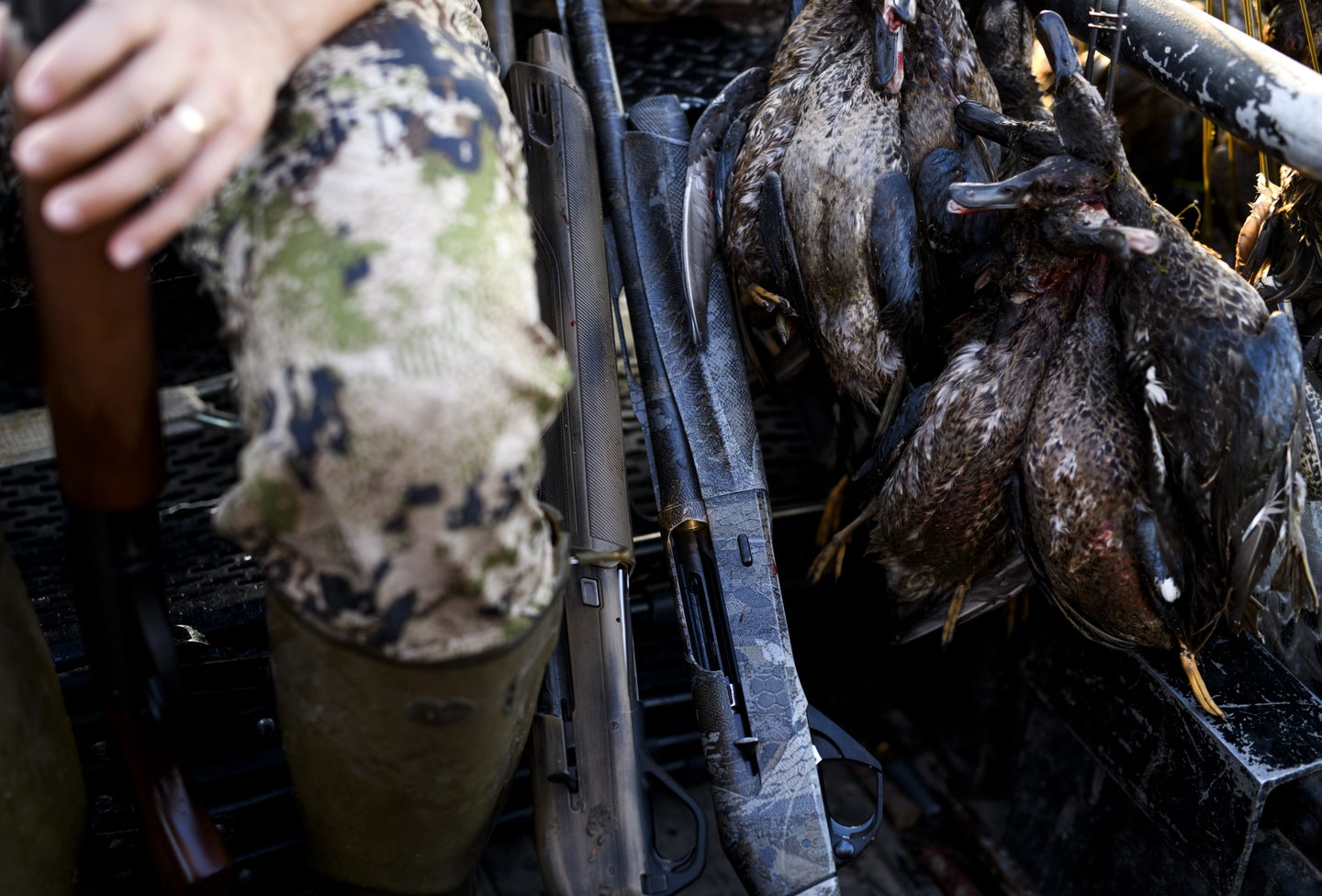 It’s no wonder that waterfowlers count reliability as one of the most important qualities in a hunting shotgun, since they routinely hunt in conditions that can turn repeaters into single shots. Legendary reliability has made “Benelli” is a household name among waterfowl hunters. Benelli guns, such as the Benelli Super Black Eagle 3 shotgun, are celebrated and known as some of the best semiautomatic shotgun models in the world. Based in Urbino, Italy, far from the Italian gun-making center of Brescia, Benelli made motorcycles until the 1960s. While the Benelli family made shotguns for themselves, they didn’t start producing them until they met an engineer named Bruno Civolani who had an idea for a different kind of semiauto shotgun. The inertia action of Civolani’s shotgun proved to be extremely reliable in any conditions. And because it made no use of expanding gases like other semiauto designs, it stayed cleaner longer.

Read Next: The Best Duck Hunting Shotguns of 2021

Although Heckler and Koch began importing Benellis to the United States in the 1980s, it was the introduction of the Super Black Eagle in 1991 that made Benelli famous. The new Benelli Super Black Eagle 3 is one of the best shotguns you can buy if you are in the market for a top-of-the-line hunting shotgun.

What Kind of Shotgun Is the Benelli Super Black Eagle 3?

The Super Black Eagle was the first semiautomatic shotgun chambered for the new 3 ½-inch 12-gauge cartridge. The 3 ½ shell had developed to increase the capacity of 12 gauges so they could hold more large steel shot pellets, as non-toxic shot had recently been mandated for all waterfowl hunting in the United States. Waterfowlers took notice of this gun, not just for its 3 ½-inch capacity, but for its trim lines and reliability. It sold for the then-unheard of price of $1,000. It quickly became the prestige gun among duck hunters, even earning the tongue-in-cheek nickname, “Arkansas Purdey.”

Since the original Super Black Eagle debuted, Benelli has overhauled the gun twice. Besides updating the gun’s lines, the SBE2 featured Benelli’s ComforTech stock that helps reduce the recoil that lightweight inertia guns are known for. The latest Super Black Eagle, the SBE3, cures the maddening out-of-battery misfire that plagues intertia guns, not often, but always at the worst time. It features a number of other improvements, too, which were on display when we put the gun through its paces.

How We Tested the Benelli Super Black Eagle 3

Outdoor Life Editor-in-Chief Alex Robinson brought his Benelli SBE3 for us to review during our teal hunt at Pintail Hunt Club. All of us loved shooting it in the field and at clays. One of the advantages of inertia guns over gas-operated designs is that they have no bulky gas system parts around the magazine tube, so the forearm can be very trim. There was a huge difference in feel between the SBE3 and guns like the Browning Maxus II and the very bulky Beretta A400 Xtreme Plus. The slender forearm helps the gun point very naturally. And, as expected, the gun tipped the scales at 7 pounds even—a lightweight gun for a 12-gauge semiauto. The trigger pull measured 6.2 pounds, which is about normal for a hunting gun.

Our gun patterned well when we tested it with Federal Speed Shok steel 2s with the factory Modified choke. Testing for point of impact did reveal a very high-shooting gun. Many of the early SBE3s shot extremely high, and Robinson’s gun is one of the older ones. While Benelli has since corrected for point of impact somewhat, the guns do shoot high. With that said, we had absolutely no problem hitting ducks or clay birds with the gun. It cycled 1 1/8-ounce target loads perfectly and had no trouble digesting hunting loads, either.

The ComforTech 3 recoil reduction system includes a soft cheek pad that goes a long way toward making this lightweight inertia gun comfortable to shoot. None of us complained about its recoil. Also, the enlarged controls made it an easy gun to handle. One of the best improvements to the new gun is the Easy Locking bolt. This feature eliminates the misfires that plague inertia guns that have been bumped out of battery or loading by easing the bolt forward.

Methodology: How We Judged the Benelli Super Black Eagle 3

The SBE3 suits the tastes of contemporary waterfowlers, who tend to prefer lighter-weight guns. The ComforTech 3 recoil reduction makes the gun comfortable to shoot even with hunting loads, which might otherwise kick unduly in a 7-pound 12-gauge duck hunting gun. The enlarged controls made it easy to work the safety and release the bolt.

The new SBE3 is trimmer through the grip than its predecessors and slightly lighter. It also maintains the contemporary styling of the SBE 2, with a few tweaks. As you should expect for a gun selling for $1,800, the SBE 3 is a well put-together hunting shotgun. We couldn’t find any fault with its fit and finish.

Robinson’s gun has a gray OptiFade camo finish that has held up well to the abuses it has suffered. The enlarged safety and bolt handle make it easy to use with the cold hands. And the bolt release is big enough to be easy to push, but flush enough that you don’t bump it accidentally as you handle the gun.

Because it handles any loads from 1 1/8-ounce target ammo on up to 3 ½-inch magnums, the SBE 3 can also serve as an upland gun, a gun for fun rounds of clay games, and for waterfowl hunting. Because of its high point of impact I’d be leery of shooting it at turkeys without some kind of optic. Fortunately the receiver is drilled and tapped for a scope or red-dot base. Also, the SBE 3 is light for serious target shooting and it struggles to handle very light target loads that some prefer. New for this year, Benelli introduced both a 3-inch 12 gauge and 3-inch 20 gauge SBE 3, giving you all the advantages of the original.

Reliability made the Super Black Eagle’s reputation. And the the SBE 3 is the most reliable of all because it’s the first one with the Easy Locking bolt. No matter how hard we tried to bump or ease the bolt to make the gun misfire, we couldn’t. It locked solidly into battery and shot every time. We suffered no malfunctions or misfires with the SBE 3 either.

“Value” isn’t usually the first word that you see when reading shotgun reviews about an $1,800 semiauto. But the SBE 3 is a durable, reliable, proven gun that will function perfectly for years in harsh conditions. And the new version with the Easy Locking bolt is more reliable than the SBE or SBE 2. A gun that won’t let you down is worth whatever you pay for it.

What the Super Black Eagle 3 Does Best

What the SBE 3 does best is work. It will deliver three shots when called upon. Better yet, the gun’s lines, controls and enhanced recoil reduction system all make it an easy gun to shoot under trying conditions. It’s light and easy to carry and handle. The trim lines makes it a gun anyone can shoot. And, it’s versatile. The 3 ½ capability lets it shoot heavy loads for geese and swans. You can also load it down and take it to the dove field or clays course. If you think of a shotgun as a tool just like your mud motor, the SBE 3 is reliable and will run in the worst weather.

What the SBE 3 Does Worst

The sticking point for many people with the Super Black Eagle 3 is the higher point of impact. To be honest, in the field and on the clays course we didn’t even think about the gun’s point of impact. We kept our focus on the teal and targets and all of us hit well with the gun. The high point of impact would become a problem for those times you need to aim a shotgun, say, in turkey or predator hunting when you have a chance to shoot at a stationary target.

Fortunately, the SBE 3 is drilled and tapped for a scope or red-dot base. Better yet, the top of the receiver and the barrel are one piece of steel so there’s no play between the barrel and receiver that can harm accuracy. But, you might not want to take an unsighted SBE 3 turkey hunting without quite of bit of practice first. Also, while the ComforTech 3 system works, 3 ½-inch shells in light guns still kick hard.

The Super Black Eagle changed waterfowl guns and made inertia-operated guns just as popular as gas guns. The Benelli Super Black Eagle 3 builds on the legacy of its predecessors. Where they were light and trim, it is lighter and trimmer. Where they were reliable, it is more reliable. Where they were versatile, it is more versatile since it can now be had in 3-inch 12 and 3-inch 20 gauge as well as in the original 3 ½ inch configuration. It became a classic waterfowl gun almost overnight when it was introduced in the 90s. It’s going stronger than ever 30 years later.