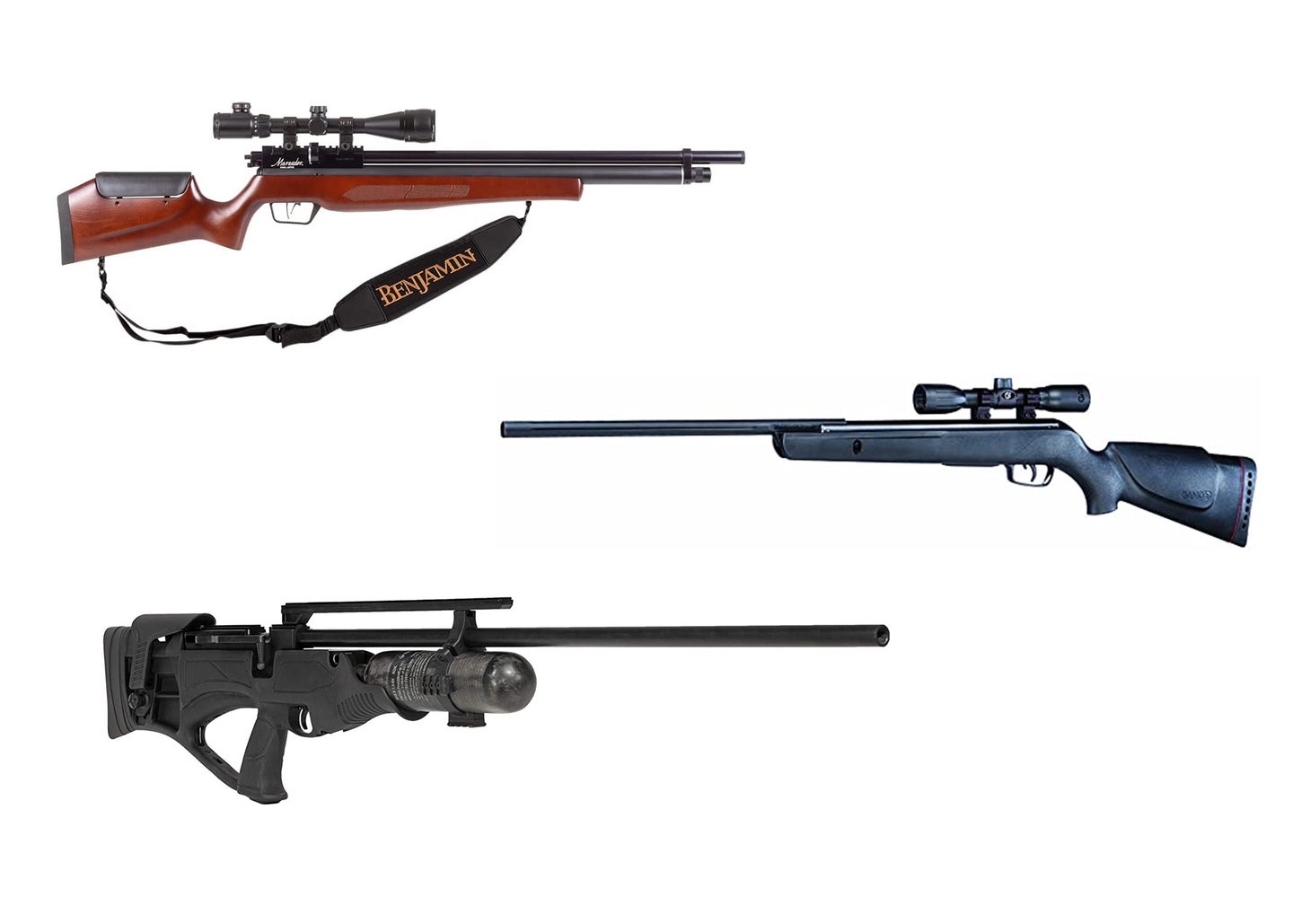 You have a lot of choices when looking for a good air rifle. The trick is figuring out what you’re going to use yours for

There’s never been a better time to buy an air rifle than right now. Of course, with all the high-tech options and different makes and models available to prospective buyers, it can get a bit confusing—especially if this is your first air rifle. When you start researching air rifles, you’ll notice that there’s a lot of jargon and acronyms being thrown around: pellets, PCP, BBs, variable pump, break barrel, and more.

If you still think of air guns as just the Daisy Red Ryder from your childhood, then this is going to be an eye-opener. Sure, Ralphie’s carbine action, 200-shot, range model air rifle, with a compass in the stock and this thing that tells time was cool in its day, but there’s a lot more to the story of air rifles. They have a long history that stretches back centuries. In fact, Lewis and Clark took a .46-caliber Girandoni air rifle capable of 22 shots at a time on their famous expedition.

If you’re new to the air rifle scene and aren’t sure if you’re going to stick with it, then you probably don’t want to spend a whole lot of money. If that’s the case, the Gamo Varmint is the best pellet air rifle for you. Powered by a spring piston with a break barrel, this air rifle can reach speeds of 1,250 feet-per-second with a .177 caliber pellet. Plus, the included Gamo 4×32 scope means it’s ready to go right out of the box with no extra setup costs to you.

With an overall length of 43.3-inches and a 17.8-inch barrel, the Gamo Varmint weighs just 5.47 pounds. It’s a lightweight, accurate, and affordable option for a beginner looking to get the best pellet air rifle for their money. Or, if you’re a seasoned pro, this is a great gun to have on hand just for fun or for introducing someone new to the world of air rifles.

Semi-automatic firearms are beyond commonplace today, but not when it comes to air guns. Since there’s no ignition inside an air gun, making one that works properly is easier said than done. Undeterred, Benjamin has managed to recycle some of the air used to propel a shot back into the action so that it cycles properly and sets the shooter up for the next shot.

The semi-auto version of the Benjamin Marauder is a .22 caliber PCP rifle that uses a 10-shot magazine. The air tank can supply about 50 shots at around 900 feet per second, letting you burn through pellets at an impressive clip. If you go this route, make sure you pick up a few spare magazines. The semi-version has retained all of the accuracy of its bolt action predecessor, so you can feel free to hunt with this one too.

Ammo isn’t cheap or easy to find these days, but airgun BBs are both affordable and plentiful! Pretty much everyone owns an AR now, and the Crosman M4-177 is a great air rifle to use if you want to get in some training on a familiar platform while keeping the cost down. With multiple sections of Picatinny rail and spots for a sling, you can outfit the M4-177 air rifle as close to your “real thing” as you’d like.

The rifled steel barrel can shoot BBs and pellets, and you can expect velocities in the mid-600 feet-per-second with either projectile. The reservoir holds 350 BBs, and the removable magazine holds clips that can be loaded with five BBs each. There’s also a spot in the magazine for the sight adjustment tool. You can remove the sights in case you want a sleek flattop design for an optic of your choice. The variable pump design makes it perfect for left-handed shooters, too!

Some people just need to have the biggest and the baddest of any given product. When it comes to big bore air rifles, one need look no further than the Hatsan PileDriver. Shooting a .50 caliber pellet at 850 feet per second and generating more than 800 foot-pounds of energy, the PileDriver is a rifle to be reckoned with.

Now, it’s true that the AirForce Texan is faster by about 150 feet per second, but the Hatsan PileDriver packs more punch, delivering an average of 200 more foot-pounds of energy. If you’re planning on hunting with your big bore air rifle, then that extra boost in energy might be more beneficial to you than having extra speed.

Equipped with an adjustable cheek rest and buttpad, a bullpup stock, and a two-stage trigger, the PileDriver air rifle provides an overall exceptional air rifle for hunting.

Things to Consider Before Buying an Air Rifle

Just like a “powder burner,” you’re going to need ammo. Depending on what you choose, this could be pellets, BBs, etc. You’re also going to need something else: air. Depending on the type of air gun you choose, you may have to purchase canisters, etc. It’s not a big deal, but it’s something to keep in mind if your only air gun reference is a pump gun, where all you need is muscle power to pump and shoot.

Pre-charged pneumatics, or PCPs, are amongst the strongest performers in the world of air guns. These compressed air guns use onboard tanks that store air at extreme pressures to propel pellets at velocities that range from routine to astonishing. With the velocities they can achieve, PCPs are usually some of the better air rifles for hunting.

You’ll need a way to keep the air gun’s onboard tank filled if you want to get in on the pre-charged pneumatic game. The most frequently selected option is a larger, external tank that can be filled to around 4,500 pounds per square inch. If you’re into cardio, you can choose a hand pump that will give you a workout with each fill up. Or, you can buy a special high-pressure compressor that will keep your tanks topped off.

The term “pellet gun” covers a lot of real estate. Essentially, a pellet rifle is anything that is designed to shoot a pellet—which includes most air guns. Typical calibers for pellet guns start at .177 and run all the way up to .50 and beyond. But most that you will encounter will be between .177 to .25, which are perfect for pest control, small game hunting, and plinking. Unlike so-called bb guns, the barrels on pellet guns are rifled, which imparts spin and increases accuracy.

Pellets come in a variety of shapes. The tips are usually pointed, domed, rounded, hollow, flat, or wadcutter shaped, depending on their intended usage. The back half is typically hollow, which helps with weight distribution and serves to steady the pellet in flight. This portion, sometimes referred to as the skirt, will expand when the pellet is fired to seal against the bore. This also engages the rifling for accuracy-inducing spin.

Air guns utilize two basic types of ammo: pellets and BBs. Pellets are made of lead or other soft alloys, while BBs are typically constructed of a harder material. Most BBs are made of steel, and are sometimes coated in another material, such as copper or zinc, to stave off corrosion. Because they won’t deform when they impact, BBs should never be used with steel or other reactive targets.

The BBs that go into airguns are about the same diameter as BB-sized shot. They are usually referred to as .177 caliber, but they are actually 4.5mm. Their round shape isn’t the greatest for aerodynamics, but they don’t hit speeds where that becomes a limiting factor. As ricocheting can be an issue with the hard spheres, make sure you don’t shoot at concrete or other hard surfaces.

It used to be that hunting squirrels, rabbits, and pigeons were just about the only game that could be taken with air rifles, but that has changed. Big bore air rifles that can deliver tremendous energy have increased the size of animal that can be ethically taken by leaps and bounds. Some intrepid hunters have even taken cape buffalo and American bison utilizing air rifles and, probably, nerves of steel. Feral hogs, deer, and predators such as coyote have become commonplace.

Like with many things, the law is slow to catch up. The number of states that allow big-game hunting with air guns is ever increasing, but many states still don’t officially approve. If you want to try your hand at taking larger animals with your high-power air rifle, first check with your state’s department of game and fish.

When trying to determine if .22 or .177 is the better air rifle caliber, you have to first ask what you’ll be using the gun for and what performance metrics are most important to you. Most target shooting is done with .177 rifles, while hunting is more often done with .22 rifles. The .177 caliber has higher initial velocity with lower muzzle energy, and the .22 caliber has a lower initial velocity with more muzzle energy. They’re both great calibers; you just need to ask yourself what your main purpose for the gun is going to be before deciding on a caliber.

In short, no. You cannot kill a deer with a .177 pellet gun. Sure, there are always exceptions to the rule (never say never, right?), but the bigger thing here comes down to hunting ethics. If you’re looking to humanely kill a deer, it is recommended that you use an air rifle with a caliber of at least .40 for one of medium size.

As long as you have a .22 caliber air rifle that’s capable of a high velocity with plenty of muzzle energy and you can be sure of making a good shot, then yes, you can kill a coyote with a .22 air rifle. While it would be better to have something in the .30 caliber range, it can be done.

With so many great models on the market right now, it’s really hard to make a bad choice. At the end of the day, the best air rifle is extremely subjective. It’s a question that has many answers. If you’re looking for a big bore air rifle, check out the Hatsan PileDriver or the AirForce Texan. A great entry level air gun is the Gamo Varmint. If you want a semi-auto air rifle, then go with the Benjamin Marauder. For affordable training alternatives on familiar platforms, opt for the Crosman M4-177.