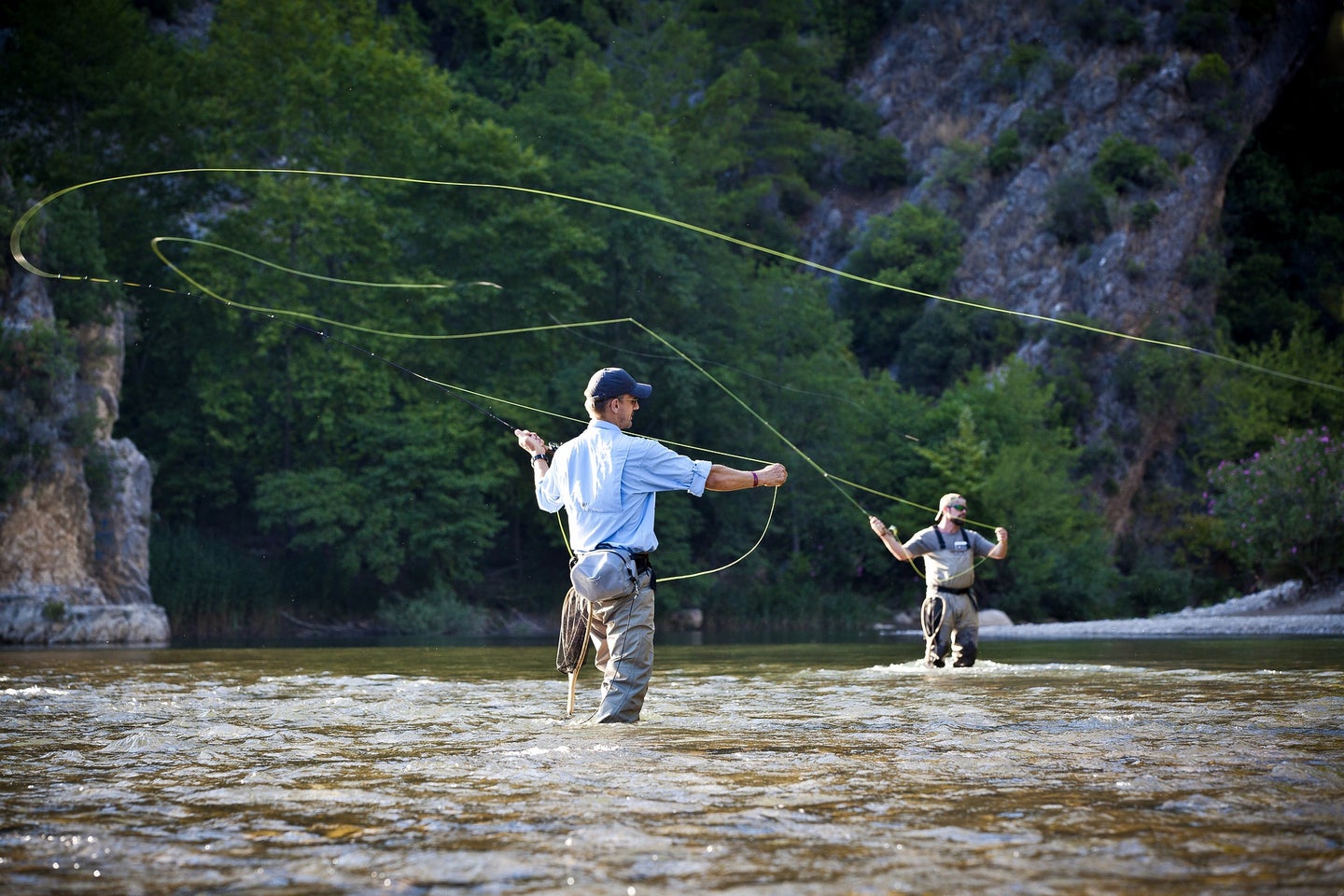 Whether it’s for freshwater or salt, here’s how to find the best fly reel for every budget

Fly fishing is unique among rod-and-reel angling, in that you can cast, set the hook, and land a fish without ever using the reel. In fact, that’s quite common—even in saltwater. I’ve landed many a schoolie striped bass by simply stripping in line. Still, we’re almost always hoping to hook a big fish, and when we succeed, you’ll want the best fly reel possible; one with a smooth drag is key to bringing the fish to hand. If an angry multi-pound rainbow trout makes a panicked run downstream, a well-constructed fishing reel will give line when necessary and allow you stop and turn the fish when the time is right.

A fly reel is a pretty simple device. Basically, it’s a spool with a handle that’s held in a frame with a spindle. The best fly reels are masterpieces of craftsmanship, built for lifetime use, and their prices reflect that. But at the other end of the scale, a fly reel’s simplicity of design makes good quality possible at an affordable price. As with most sporting gear, there are more good reels available now than ever. Let’s take a look at a few best fly fishing reels for freshwater and saltwater use.

Things to Consider Before Buying a Fly Reel

Fly fishing reels differ widely in line capacity, material of construction, and operational design. Here’s how to sort them out to find the best one for you.

Reels are organized by line weight: The bigger the line, the bigger the reel. A 5-weight line is considered the all-around size for freshwater fishing, generally suited to trout and bass. Lines in size 2 or 3 are for small-stream, backcountry trout or panfish. Sizes 6 and 7 lines (or even bigger) are for larger bass, steelhead trout, carp, and predators like pike and muskie. Saltwater fishing generally starts at Size 8 for species like striped bass, bluefish, bonefish, and snook. If you’re targeting big fish like adult tarpon, giant trevally, or sharks, you might need a line as heavy as 13.

Line size isn’t about pound-test; that’s determined by your leader and tippet. Rather, the sizes refer to weight and mass, with the bigger ones better able to cast heavy or wind-resistant flies, and to punch through wind.

As with drags on other types of reels, the drag on a fly fishing reel is a method of making it harder to pull line, and is used to control the runs of big fish. Lots of trout fishing is done with simple click-and-pawl reels that offer minimal drag, which sometimes needs to be supplemented by using your palm to apply pressure to the spinning reel spool—a fish-fighting technique known as palming. All of the reels in this roundup have disc drags, operated by tightening a knob that applies the brakes. The best drag systems avoid “sticky” startup inertia and allow the spool to spin smoothly, even under heavy pressure.

One other note on drags: When you store your fly fishing reel after a day of fishing, set the drag on its lowest setting. Minimizing the tension on the drag can help extend its lifespan.

A drag system that’s sealed from the elements is helpful in freshwater—but in the salt, it’s essential. Saltwater and sand will quickly damage the components of your drag if it’s not sealed. In fact, even most freshwater reels, apart from the least expensive models, have sealed drags these days.

A few low-end reels are made of carbon fiber, but the majority are built of aluminum. Most are “machined,” or cut from solid aluminum, but some are still made by “casting,” or by pouring molten aluminum into a mold. There are a couple of cast-aluminum reels in this list, and they have more than enough precision and durability for their intended uses. Still, reels machined from bar stock aluminum generally have more exacting tolerances.

This is an old topic in fly reels: If you’re right-handed, should the reel handle be on the right side of the reel, so you can use your dominant hand to crank? Or should it be on the left, so you don’t have to pass the rod to the other hand to reel? I think most anglers reel with their non-dominant hand—myself included—but I’m also starting to think there is an advantage to reeling with the dominant hand and may change my reels over this season. Fortunately, all reels can be converted to whichever size reel you prefer.

The Abel SDS has a fully sealed multi-disc drag, more than 20 pounds of drag pressure, an anodized aluminum construction, and an original-owner lifetime warranty. This Abel fly reel should provide a lifetime of performance. The 9/10 model is ideal for all but the biggest fish species.

Abel has built a sterling reputation for quality since its founding in 1988. The SDS stands for Sealed Drag Saltwater, a critical feature for inshore and offshore fishing. The 9/10 model’s drag will protect light tippets for smaller species like bonefish, but is also strong enough to turn a tarpon. (By the way, you can add a Grateful Dead “Steal Your Face” drag knob for an extra $200.) Abel reels are designed and made in Montrose, Colorado.

This machined aluminum, sealed-drag Cheeky fly reel can pull in as much as 13 inches of line in one rotation. That means there’s less cranking to retrieve a fly or land a fish—and fits close to a quarter-mile of gel-spun backing.

Cheeky was founded in Boston in 2009 to build good gear in fun colors. They run an annual wade-fishing tournament for striped bass on Cape Cod—the largest catch-and-release fly fishing tourney in the world. The Limitless 425 offers premium-reel features for half the cost of top-end fly reels. The fully sealed gasket drag eases worries about saltwater corrosion; the big, 4.25-inch diameter offers a large arbor for efficient reeling and less coil memory; and the beveled multi-axis machining provides structural strength while minimizing weight.

Anglers and retailers rave about these reels. A Lamson Liquid fly reel is easy on the wrist and the wallet, have a sealed drag, and feature jumbo arbors for efficient reeling.

OK, so it’s cast, not machined (actually some parts are machined). Aluminum is aluminum, and since its conical drag is sealed, the Liquid will hold up just fine in the brine. The lightweight design is a godsend for a long day on the boat or night in the surf. The conical drag system is the same one used on Lamson’s more expensive reels, and it’s a clever design, with the same amount of friction surface as a disc drag wrapped into nesting cones that take up less space and consequently weighs less. Users find it smooth and capable.

Lamson maintains the die casting process allows for curves and corners that are hard to achieve with machined aluminum. And there’s no denying the attractive price. Consider purchasing the 3-pack—a reel with two spools, plus a carrying case. That way, you can quickly swap between an intermediate line a sinking line.

Hatch has quickly become a top name in high-end fly reels, and the Iconic is the eagerly anticipated successor to the much-admired Finatic Gen II.

Hatch is widely seen as one of the premier reel-makers, and its newest model maintains the high standards. The carbon-filled multi-disc drag is improved over the Finatic for better heat dissipation and smoothness, and it’s built into the frame, not a cassette. The reel is cut to exacting tolerances from a block of solid aluminum and Type II anodized. The foot isn’t screwed on; it’s part of the machined frame. That makes for a solidly built fly reel—but if you drop it on a rock and bend it, you’ll need to send the whole reel in for repair. Fortunately, there’s a non-transferable lifetime warranty.

The Hydros has the same features as most top-tier reels—but compared to the price tags on those models, this reel is a steal.

The Hydros is imported, not American-made, which probably accounts for its great price point. Still, it’s an Orvis fly reel—made of machined aluminum with a Type II anodized finish. It has a smooth carbon-and-stainless-steel drag system with no startup inertia. The drag knob that drew complaints on earlier models has been improved, as has the seal of the drag itself. And the foot stem has no corners to put kinks in a leader that gets wrapped around it. The Hydros II is also lighter than its predecessor, the Hydros SL.

The NXT Black Label II offers a smooth stacked disc drag for right around C-note, making it an economical choice for trout, bass, and panfish. The reel looks good, too.

In case you hook up with a lunker brown trout, the TFO NXT Black Label is equipped with a smooth, stacked, alternating-disc drag with minimal startup inertia to keep the situation under control. The reel is well-ported for lightness but plenty strong. Spare spools cost aren’t expensive, making it easier to keep a selection of lines ready for the conditions you face. A nice neoprene soft case is provided, too.

How I Made My Picks

I’ve owned a bunch of reels since the mid-1980s, and I’ve been surprised a few times—by having to send pricier models back for repairs, and by how well lower-priced units have held up, especially on rock jetties while night fishing along the Atlantic coast.

In assembling this selection, I looked at the top reel makers at the various price points and considered features, construction and materials. I was pleased (but not surprised!) to find many great reels by other brands not included here. Today’s fly angler has a lot of great options to choose from.

Q: How do I know what size fly reel to get?

Choosing the right size fly reel depends on what kinds of fish you want to catch. If most of your fishing takes place in creeks, rivers, lakes, and ponds, for species like bass, trout, and panfish, a reel for line size 5 or 6 is best. Lighter lines such as size 2 or 3 are fun for smaller trout in small streams, while a size 7 line is useful for larger freshwater fish like steelhead or pike. If you fish saltwater, choose a reel for a size 8 or larger line. The really big species like tarpon and sharks call for size 11-13 lines and reels.

Q: How much does a fly reel cost?

Q: What is a good brand of fly reel?

The top reel brands include Abel, Tibor, Hatch, Ross, Nautilus, Bauer, and Lamson. General fly tackle brands, such as Orvis, Sage, Redington, and Temple Fork Outfitters also offer fine reels. Generally, you’ll get a good reel from any of the major fly-fishing brands, and with a basic amount of care and maintenance, you’ll enjoy them for years to come.

It’s not uncommon for an angler to sit indoors, far from the fishing, and just spin the spool of his or her reel around in its frame, just to enjoy the smooth motion and exquisite engineering. Fly reels are like that. Even the inexpensive ones are satisfying and cool. The pricey ones can be as impressive as a Swiss watch. On the water, there’s no feeling like knowing the fish you’ve hooked is too big to strip in by hand and needs to be put on the reel. That’s when the real excitement starts. A good reel assures that the excitement ends the way it should – with a nice fish in your net or your boat.