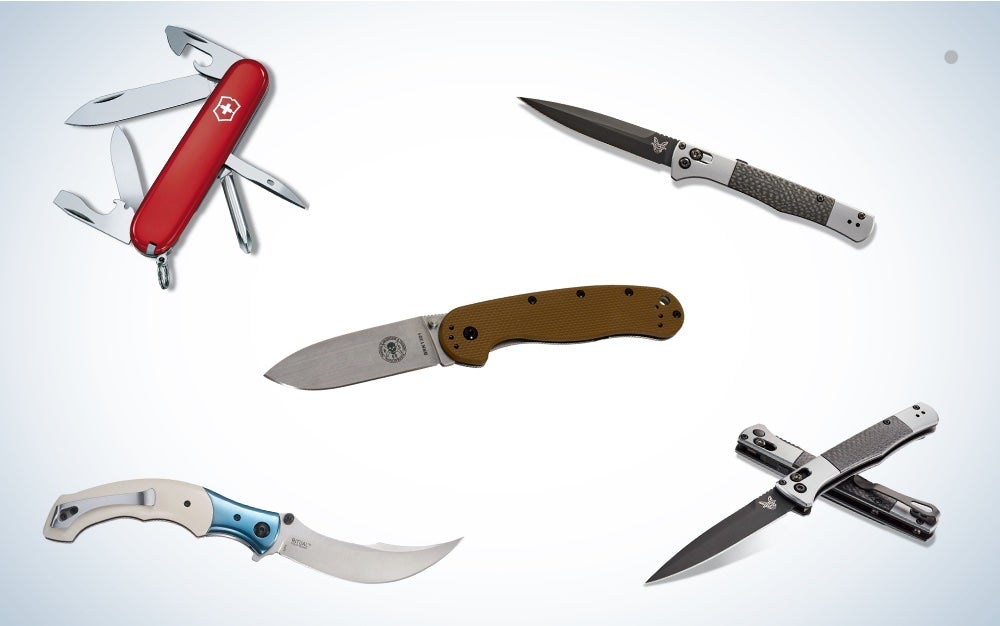 Whether you want a traditional, automatic, or EDC knife—this guide will help find your next folding blade

How can you possibly choose the best folding knife? There is an endless number of choices on the market today, and it can seem impossible to narrow it down. Rest assured, we’re here to help. We will walk you through some of the important factors that you should consider while you’re shopping. Investing in a new EDC pocket knife requires careful thought as well as no small amount of homework to ensure you end up with exactly what you want or need.

We’ve also cut down on some of the legwork for you by gathering together some of the best high-quality pocket knives available. Here are some of our top choices and things to consider. The last thing I’ll say before we get on with the list is this: If you’re stuck on thinking of best gift for hunters for the holidays, you can’t go wrong with a knife. No matter if he or she already has plenty of blades—let’s be honest: You can never have too many knives.

How To Find the Best Folding Knife

As you shop online, you might have trouble deciding whether some options are truly useful or if they are just cool pocket knives that serve no real purpose. Here are some practical considerations to keep in mind.

Your budget is probably the most important factor when shopping for EDC knives. Even if you could afford a few hundred dollars or more, you might not want to spend that much on a pocket knife. And let’s face it, most of us couldn’t swing that much even if we wanted to.

Once you’ve established your budget, you’ll probably want to consider the size of the knife next. Bigger isn’t always better when it comes to an everyday carry knife. In some areas, there are legal limits as to the length of the blade. It is worth your while to your local laws to determine what is legal. Beyond that, a larger knife is also more likely to be frowned upon in some workspaces compared to something smaller and more innocuous.

Size also comes into play when you consider how you’ll be carrying the folding pocket knife. Some great quality pocket knives are small enough to carry comfortably in a pants pocket, while others are large enough to need a belt pouch.

Outside of price, though, perhaps the biggest factor is how you plan to use the knife. Tanto folding knives, for example, might be great for self-defense, but they aren’t that awesome when it comes to food prep in the lunchroom at work. Determine what you need your knife to do in a daily basis.

Finally, look at the construction of the knife. The steel should be high-quality, the handle sturdy and well-built, and the inner workings flawless.

The red handle is unmistakable. Few can deny the quality of anything bearing the Victorinox stamp. They’ve built a well-deserved reputation for some of the best folding knives available without costing an arm and a leg. The Victorinox Tinker is one of their classic models. It has two sharp blades, a bottle opener, screwdrivers, tweezers, a toothpick, and more. Plus, it is small enough to carry in your pocket all day long without discomfort. The best part is that Tinker comes in for under $30.

There are, of course, dozens of similar models in the Swiss Army Knife catalog, varying slightly with the onboard tool mix. The Tinker is notable for the inclusion of the Phillips screwdriver, which is easy to deploy from the backside of the knife alongside the combination reamer, punch, and sewing awl.

If you’re looking for a truly classic folding knife, look no further than the Buck 110. This blade truly is an American icon. As F&S writer David E. Petzal once wrote of the Buck 110: “You saw 110s on the belts of just about everyone who worked with their hands, and I don’t know how many people I’ve hunted with who, when it’s time to start field dressing, reach for a 110. The new version is sleeker, but still does everything. Since 1964, Buck has sold 15 million Model 110s. Think of that. Fifteen million.” More than 50 years later, the Buck 110 is as classic as ever and shows no sign of going out of style (or production). In another 50 years, we won’t be surprise if another 15 million of them have sold.

It just doesn’t get much more traditional than Case Knives. They’ve been in business since 1889 and show no signs of slowing down. The Medium Stockman folding knife is one of their most popular models. It has three blades, Clip, Sheepfoot, and Spey, each with different purposes. With its sharp point, The Clip is great for detail work as well as piercing sorts of chores. The Sheepfoot was originally designed to trim hooves. Many people today use it for carving and carpentry tasks. The Spey is favored for skinning game as well as an all-purpose duty blade.

The folding knife shown here has an Amber Bone, Peach Seed jigged handle. It has plenty of traction for a positive grip, even if your hands are wet or cold. Case offers a huge range of handle options, from traditional like this to ultra-modern and high-tech. Their Chrome Vanadium blades are well-known for holding an excellent edge throughout your daily grind, yet they aren’t an incredible bear to sharpen.

A folding pocket knife like this will easily last multiple generations with just a little care and regular maintenance. It is something you’ll be able to pass down to your kids or grandkids, giving them a heirloom to treasure as they blaze their own trails and live their own adventures for years to come.

Avispa is Spanish for wasp. This pocket knife was designed by survival experts Mike Perrin and Jeff Randall. They are familiar with the survival and bushcraft crowd and are known for designing high-quality, robust, durable products that will hold up to real-world use and abuse.

This folding knife has a large handle, giving you plenty of real estate for a good grip, even those with big hands. It is also very ergonomic and will be comfortable even after prolonged use. The Avispa is equipped with a frame lock, which allows the handle to be slimmer in design, though not so much so that it feels lost in your hand. The pocket clip is reversible from side to side and end to end, giving the user plenty of options as to how they’d like to carry it in their pocket.

While a folding knife is generally seen as inferior to a fixed blade when it comes to survival tasks, as a general rule, they are easier to carry than a sheath knife. If you’re going to go with a pocket knife for this purpose, it needs to be solid and last for the long haul—and the Avispa ticks all the right boxes.

With its Persian-inspired sweeping curves, the CRKT Ritual is a handful. Yet despite its size, it is eminently comfortable to use. Owing to the IKBS ball bearing pivot system used in the design, the blade opens quickly and easily with just a push on the flipper.

This is a big knife, no question. When fully opened, it stretches to almost ten inches from end to end. Even closed, it is over five inches long. But, it is an impressive folding knife, one that will capture attention and, dare we say, even envy. The curved blade terminates in a needle-sharp point. There is a little bit of jimping on the thumb rise part of the blade’s spine.

The handle is a combination of ivory Micarta with blue stainless-steel bolsters and black hardware. The Micarta has slight texturing that adds an elegant touch to the ensemble. Despite the size, the Ritual is very ergonomic. The pocket clip is flat enough that it doesn’t irritate the hand holding the knife. All in all, whether you’re taking on an evil genie in the desert or just eliminating the stack of boxes that’s been piling up, the Ritual will make short work of it.

Q: What is the best folding knife lock?

There are several different locks used to secure the blade on a folding knife, with some being more secure than others. The liner lock is likely the most common and can be very secure. It involves a tensioned bar that slides into place as the blade is opened. It fits snugly under the blade and keeps it in place until you move it to close the knife.

The lockback style has been in use for decades. Most of us are familiar with the classic Buck 110 traditional folding knife. A frame lock folding knife is similar to the liner lock. But the locking bar is part of the handle frame rather than being a separate component.

Q: What knife does John Wick use?

John Wick, played by Keanu Reeves, is portrayed as an almost unstoppable force of nature in this series of films. Highly trained and eminently deadly, it is natural that he carries a knife in addition to all manner of firearms. To date, all of the folding knives seen in the movies have been the Microtech brand. In the first film, John Wick used a Microtech Ultratech OTF, which stands for Out the Front as this is an automatic folding knife.

In John Wick 2, he carried and used a Microtech Combat Troodon OTF. This knife is a bit larger than the Ultratech, with a blade measuring 3.8 inches, compared to 3.4 inches on the Ultratech.

In the third movie, John Wick used a Microtech Cypher OTF. This model has a double-edged dagger-type blade.

Q: What is the best folding knife in the world?

The best folding knife in the world will differ for each person based on their budget, blade profile choice, favored locking system, and more.

As a practical matter, the knife you have with you is always better than any knife you left at home. It also pays to know what the local laws and ordinances are regarding pocket knives. Many areas have restrictions on the length of the blade or whether automatic or assisted-open knives may be legally carried. The last thing you want is to end up in hot water because of the EDC knife you chose to keep with you.

The Best Folding Knife for You

There are many quality pocket knives out there. But if you keep in mind some of the considerations we mentioned, you’ll be able to choose the best folding knife in the world for yourself. If you didn’t see your favorite knife mentioned, let us know what it is in the comments and why you love it.