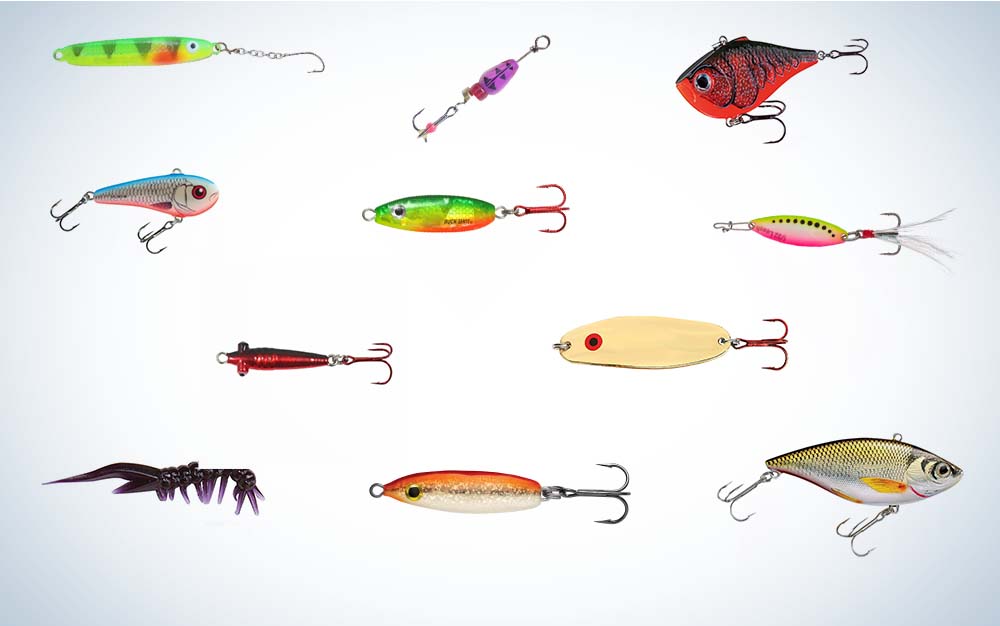 The Best Ice Fishing Lures for 2022

From the best ice fishing jigs to super spoons to killer crankbaits, here are our picks for the top ice fishing lures for walleye, pike, lake trout, crappies, and more

Read Next: 10 High-Tech Tools to Change the Way You Ice Fish

As you’re sorting your ice fishing tackle this season, these are the crankbaits, blades, and soft plastics you’ll want to bring onto the ice. An assortment of these baits in various colors and sizes should keep you into the lakers, walleyes, pike, and panfish all day.

The Chubby Darter is an ice-fishing legend, and you won’t find a more effective vertical lure. Its slow sink rate and unique shape imparts a tantalizing swimming action that draws strikes. It has become a mainstay among ice anglers, and it is one of the best ice fishing lures for walleye, perch, bass, crappie, and pike. The Chubby Darter is available in 1 3/8- and 1 ¾-inch models in six detailed, lifelike patterns.

The Jigging Rap is a hard-water icon.

Few lures are more well-known among ice fishermen than the Jigging Rap. The lure is one of the best ice fishing baits for vertical fishing with a horizontal line-tie and has a solid construction that sinks fast. The Jigging Rap has a circular swimming pattern created by its perfect balance and a single rear lip. The Jigging Rap’s allure comes in a wide selection of sizes and colors and is available in five lengths and more than two dozen patterns to cover just about every depth, water clarity, and species.

Read Next: The Best Handwarmers to Beat the Cold This Winter

Lipless crankbaits are favored by ice angers because of their horizontal hook tie, smooth swimming motion when jigged, and the attention-grabbing vibration of their internal rattles. The Rapala Rippin’ Rap is one of a handful of lipless cranks that are mainstays for ice fishermen. It has an oversized profile that generates a ton of flash with sharp jerks of the rod tips and flutters like dying prey as it sinks. The distinctive BB rattle system gives off ample sound with the shortest jerks and pulls.

Live Target’s Golden Shiner has the most intricate, lifelike pattern you’ll find in a lipless crankbait. The horizontal hook-tie of the Golden Shiner makes it a perfect choice for jigging and open-water fishing. It is designed to have the profile and anatomical details of juvenile baitfish, matching the hatch. The heavy Golden shiner sinks quickly in the water column, also providing anglers with incredible control of the jigging motion. It weighs ½ ounce, measures 2 7/8 inches, and is available in four natural patterns.

In the wide world of blade baits, the Binsky’s reputation has spread like wildfire. Originally kept under wraps by a small group of anglers in New Jersey where the lure was born, the Binsky is now one of the best ice fishing lures for bass, as well as walleye, lake trout, and northern pike all over the country. It stands out from other blade baits on the market with a super-thin design. With the addition of a weighted head, the Binsky produces pounding vibrations and a bright, full flash.

Many ice anglers may be unfamiliar with this lure, but the Craigi is one of the best ice fishing lures for trout. Born in the Black Hills of South Dakota, ice legend Craig Oyler designed the Craigi to capitalize on trout that feed heavily on Mysis shrimp. The Craigi imitates the shrimp with a tail kick that’s a perfect replication of the bait’s natural swimming motion. The soft plastic has duped countless trophy lake trout, and works just as well on other trout species, perch, sunfish, and largemouth and smallmouth bass.

It’s difficult to conceive an idea for a lure that’s simpler than the spoon—but in this case, simplicity is the secret weapon, because few lures flutter, flash, and wobble better than a spoon. And there are even fewer lures that trigger strikes more reliably.

The VMC Rattle Spoon has a sound chamber made from brass that contains multiple beads. The sharp, loud resonance is unique compared to other rattle spoons, and produces strikes when other lures won’t. With four sizes, the Rattle Spoon can be used to target a variety of species. Finishes range from natural to UV and glow patterns. The UV patterns reflect more light and are more visible, and glow models keep their charge for up to 15 minutes.

The Buckshot Rattle Spoon is one of the most popular ice fishing spoons for imitating minnows and other small forage. Its highly reflective, Baitfish-Image body and sharp brass rattle are incredibly effective at calling attention to itself over a wide area. The Buckshot Rattle Spoon can be used in any type of water clarity for any species with its wide selection of sizes and colors.

Read Next: Go Wild on the Ice for Yellow Perch

The Lindy Quiver Spoon has a curved body that generates an alluring swimming action. Its shape and tin-alloy construction causes the spoon to tremble as it glides on the fall, enticing fish to strike. All Quiver Spoons have one painted side and one chrome side that offer a tempting flash with sharp snaps and quick drops. The Lindy Quiver Spoon is one of the best ice fishing lures for walleye, crappie, trout, and pike, the Quiver Spoon is available in 1/16-ounce, 1/8-ounce, and ¼-ounce sizes in eight different patterns.

The Rattle Streak is designed with a flat body that holds an integrated rattle chamber. The innovative configuration emits a wide range of sounds from ripples to sharp rattles as it flutters through the water column. The Rattle Streak has quickly become known as highly effective walleye ice fishing lures, but it will serve you well for bass, northern pike, and lake trout. It’s available in four sizes from ¼-ounce to ¾-ounce, and in 21 colors.

Probably the most intricately engineered ice fishing lure you’ll find, the Time Bomb Spoon’s layered construction radiates a seductive call that fish are naturally attracted to. Its clicks and ticks closely match the sounds of prey moving along the bottom. With a highly visible body, Swarovski gem eye, brass disc, and glowing epoxy treble hook, the Time Bomb Spoon has an array of attractions you simply cannot get from another spoon. It’s available in 1/8- and ¼-ounce sizes and in six glow patterns.

The Slender Spoon is a bent, ultra-light piece of metal that produces a ton of action as it falls. Its curved body creates a crazy flutter, which, combined with a reflective sticker, generates a ton of flash a well. It is a classic lure that has been catching fish for years. The Slender Spoon is available in four sizes, from 1/16- to 5/16-ounce, with either silver, gold, nickel, or copper finishes and holographic prism accents.

Read Next: Ice Fishing Lures Made from AR-47 Scrap Metal

If there’s one lure that is synonymous with ice fishing, it is the jig. In our picks below for the top ice fishing jigs, we’ve including jigging lures and spoons alongside some classic jig patterns. Whichever one you decide to rig on the ice, you’ll likely soon be on your way to landing a limit.

The Hali Sukkula jig was one of the original ‘chain” jigging spoons that gained a reputation as one of the best ice fishing jigs. It has a slim minnow profile and is available in 35 high-visibility patterns. A No. 10 chain extends from the bottom of the jig and is attached to a single, small hook that is easily baited with a minnow or grub, presenting the bait naturally. The effect of the bait hanging under the spoon gets fish to eat and increases hook-up percentages, because the fish usually take the whole offering.

With the insane number of panfish jigs available, it can be difficult to pick the best ice fishing jig—but the Marmooska from HT Enterprises is certainly one of them. Its offset-head design fishes heavier than other jigs, giving anglers incredible control of the tiny lead head. The Marmooska will actually pivot its light-wire hook, neatly presenting its trailer to light-biting fish and increasing hook-ups. The jig is available in seven sizes and many colors.

Designed by famed hard-water angler and panfish specialist Brian “Bro” Brosdahl, Northland Tackle’s Bro Bug is one of the best ice fishing jigs for bluegill. The downsized jig is available in 1/72-, 1/64-, and 1/32-ounce sizes, which is plenty small for tiny mouths of panfish, and shy fish that are reluctant to take a whole meal. The Bro Bug is designed to look and swim identically to hatching larvae from muddy bottoms, which sunfish and other panfish feed heavily on during the winter.

Designed by Dave Genz himself, the Clam Swirl Drop-Kick was designed to have the most tantalizing cadence possible to dupe panfish. It has a 90-degree XL hook with an enlarged eye for easier rigging and is made from heavy wire with a wide gap. This configuration of the Drop-Kick translates into a higher hook-up percentage. The Drop-Kick gets name from a distinctive kick it displays when jigged correctly. The lure was also created with a flat top that can be more easily seen on a sonar unit.

With a similar design to the original Jigging Rap, the Jigging Shad Rap offers a more pronounced movement and a seductive slow spiral on its descent. By snapping the rod upward, the action can be altered to create a faster circling motion. The beefier profile of the Jigging Shad Rap is pronounced in the water, making it highly visible to nearby fish. It comes in three sizes and 14 patterns, including UV and glow colors.

Bay De Noc Lure Co. has put out a few famous fishing lures, and the Do-Jigger is one of them. The Do-Jigger has a distinct and unique shimmering effect, and it is one of the best ice fishing pike lures, and works on walleye, big trout, and bass, too. Three sizes are available, and all are offered in seven color patterns.

With one of the loudest rattle chambers you’ll find in a jigging lure, the Acme Kastmaster Rattle Master is another favorite among the ice crowd. The Rattle Master is a well-balanced spoon that produces a wild action on both the rise and fall. The combination of a loud rattle and frantic action is something you won’t find in other jigging spoons.