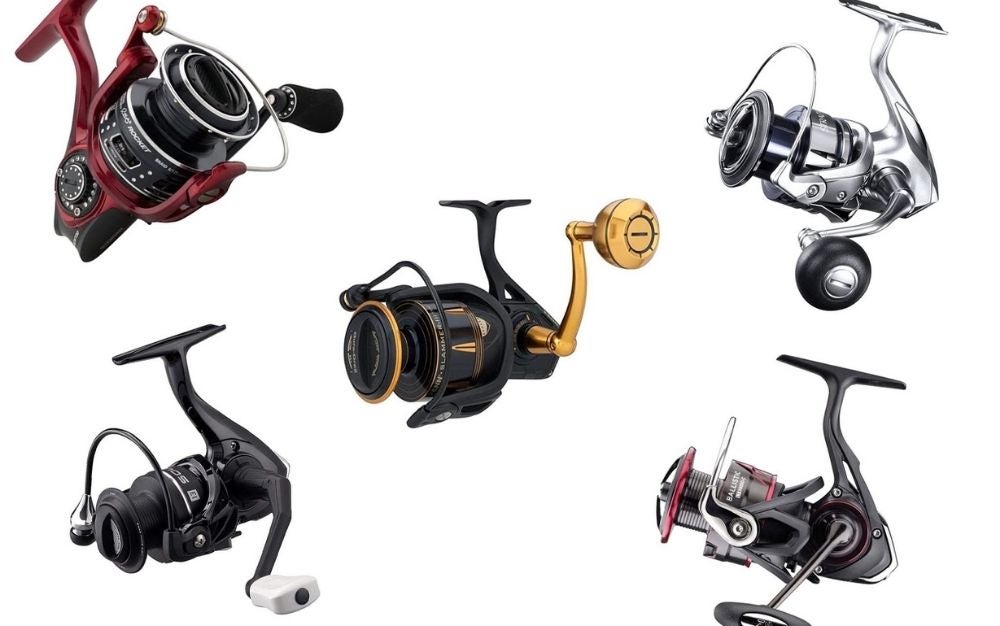 Spinning reels were historically plagued by line twists and balky drag systems, but the wide range of open-faced reels on the market today leave those stereotypes in the dust. Even at a bargain price, you can get a multi-bearing precision tool capable of wearing down a rampaging gamefish. They also come in a wider range of sizes and price points than ever before. Whether you’re introducing a child to the great outdoors or looking to tackle record-class giants, there’s a spinning reel suited for the task.

In recent years, anglers have benefitted from an increasing number of entrants into this space, which now includes both long-term industry stalwarts and industry newcomers, each with a different idea of what makes the perfect spinning reel. 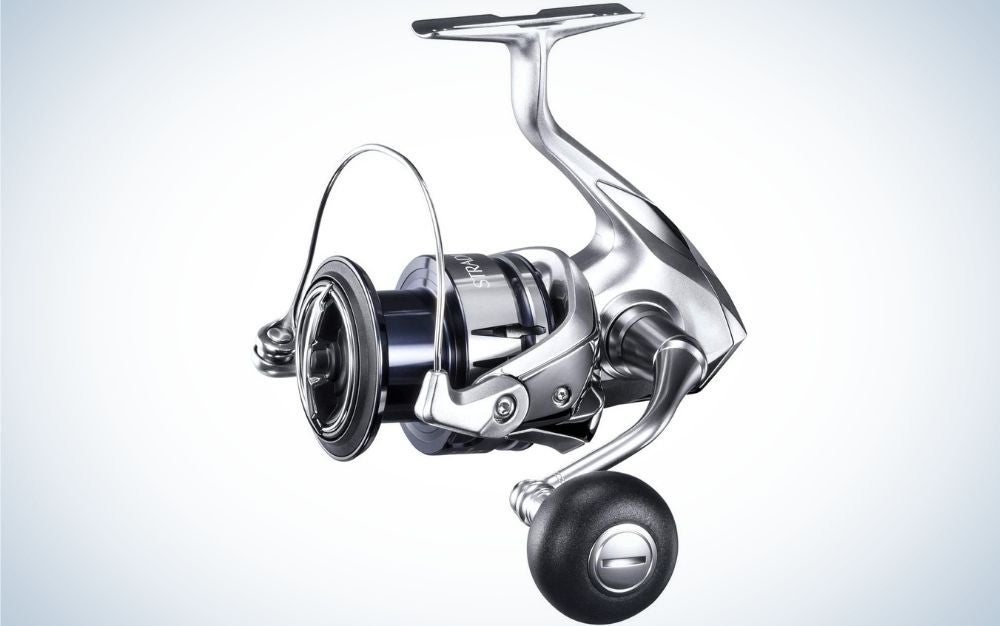 Shimano’s Stradic lineup is field-tested and proven. Coming in various sizes, the Stradic FL will be ready to excel on the water no matter the conditions.

Just when many anglers thought that the Stradic series couldn’t be improved, Shimano took them to the next level without moving the goalposts on price point. This reel isn’t inexpensive, but it could easily be mistaken for something much more costly while remaining at a mid-range price point.

Shimano has built a reel with exceptionally tight tolerances. They don’t seem to loosen up or weaken over time so if you take care of it, this reel will be just as good five years down the line. The larger models are equipped with Shimano’s Cross Carbon Drag system, which means that even the most hard-charging fish can be subdued if you play them with a modicum of caution. If you’re ready to step up from bargain and mid-range reels to something that will last you a lifetime, through all sorts of rigors, this reel should be on your shortlist.

In any of its previous iterations, the Stradic would’ve been worth the price, but this model goes above and beyond the call of duty. It has a waterproof drag, long stroke spool, and a one-piece bail. All of these features connote durability, so you don’t have to worry about it failing or underperforming at an inopportune time. 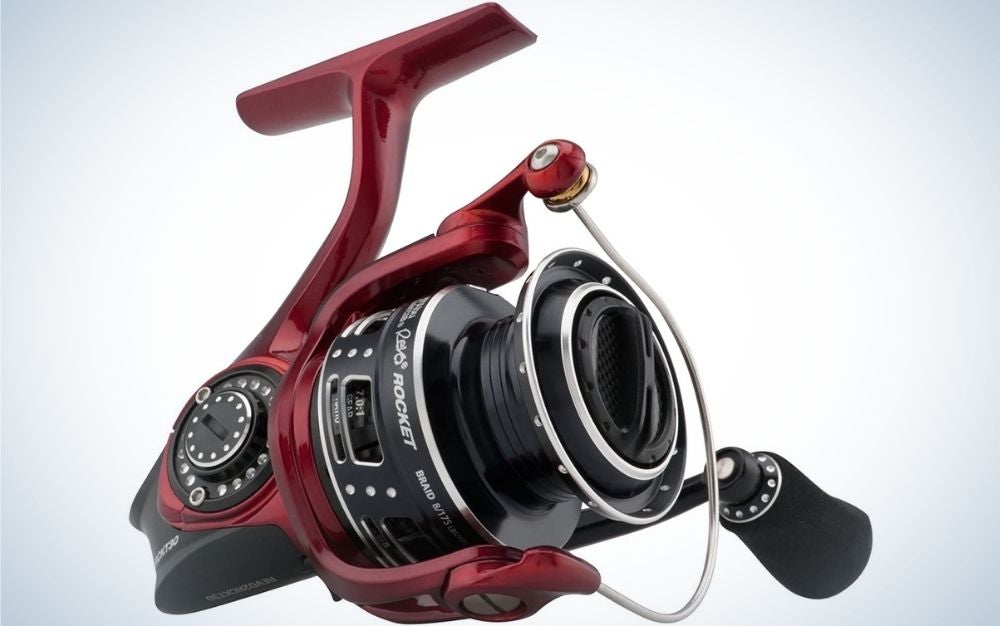 Spinning reels have fallen behind baitcasting reels when it comes to gear ratios. This reel may not be hyper-fast, but it’s closing the gap with increased versatility compared to much of the competition.

Historically, spinning reels have struggled when anglers need to pick up a lot of line in a hurry to fire out another cast. These low gear ratios have made flipping and pitching the exclusive domain of baitcasting reels. That is, until now. With an impressive 7:1 gear ratio, this reel takes a step in the right direction. So go ahead, flip that bait out and get it back in record time.

It has a total of 10 bearings, a spool design meant to maximize casting distance, and a carbon-matrix drag for when big fish decide to run in the other direction. In addition to just looking sharp, this reel is ergonomically satisfying, thanks to the bent carbon handle with a flat EVA knob.

Expect to see other manufacturers–along with Abu–attempt to push the envelope on speed in the future. But for now, this is the fastest hired gun you can find. That’s ok, because even if it were slower, it would still be a valuable choice. The Revo Rocket will perform as promised and handle a wide range of species and situations. And Abu-Garcia didn’t cut any corners to make it happen. 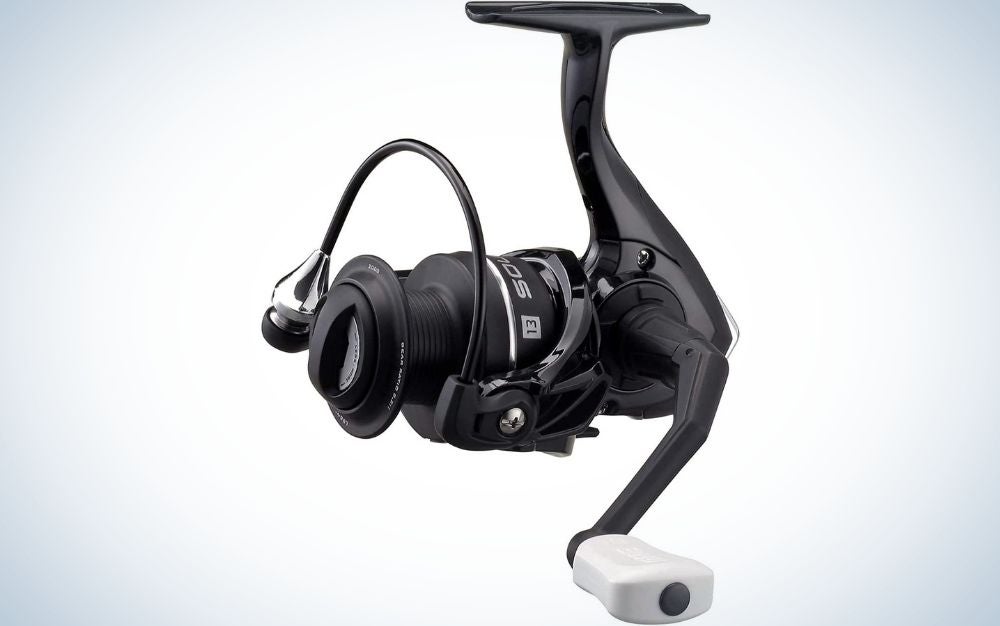 This budget reel will outperform other expensive models, and while it’s great for beginners, it can be used by hardcore anglers as well without missing a beat.

13 Fishing has jammed a lot of features into this black beauty. Highlights include a two-tone aluminum spool and aluminum handle, as well as a six-disc carbon drag system. With a maximum of 8 pounds of drag, it may not handle permit or tarpon, but that’s not its intended purpose. The Source X can get you in the game without breaking the bank and continue to serve you well so long as you treat it right. With two of the most popular sizes, it’s perfect for bass and other mid-sized freshwater species, along with light saltwater use.

A generation ago, a six-bearing reel would have commanded a premium price, but this one costs the same as a few crankbaits, and if you didn’t know better, you might confuse it with a mid-range or higher product. And though the company is relatively new when compared to legacy brands such as Shimano, 13 Fishing’s track record so far has been excellent. 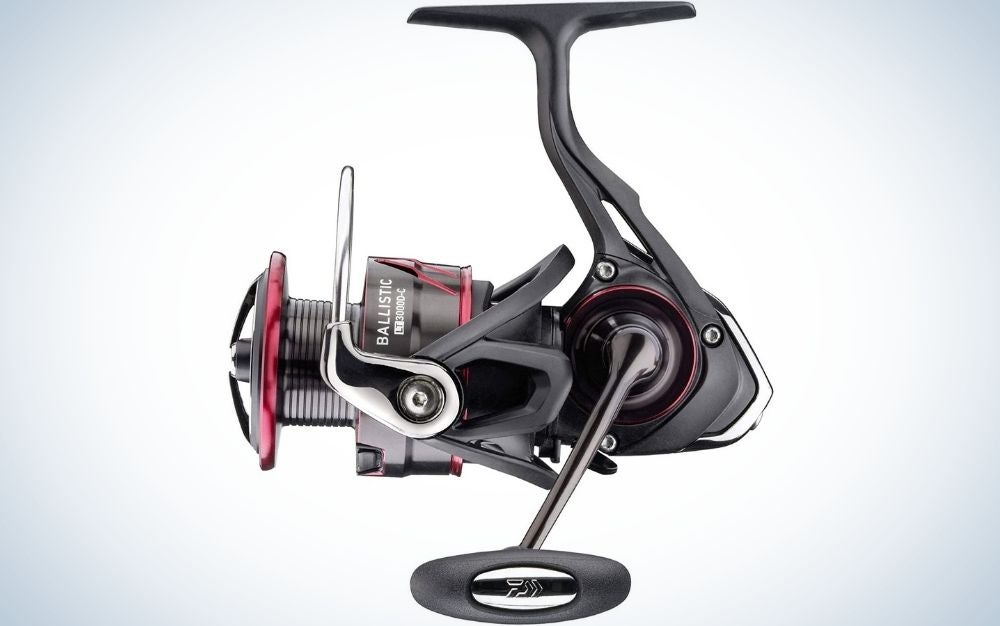 A smooth but strong drag system is arguably the most important aspect of a trout reel. This reel will ensure that you can tire out a fish without breaking off.

Thanks to the machined A7075 aircraft-grade aluminum DigiGear, the Ballistic LT puts the butter-smooth drag of ultra-premium reels into a premier, affordable package. The secret sauce is an improved drag grease that exhibits a low viscosity at rest but becomes more viscous immediately after drag start up. This provides low start-up inertia to protect the fine lines that trout anglers use, but let’s the drag pour on the pounds when a big fish gets after it.

Daiwa has taken multiple steps to make it lighter, including using their “air rotor” and “air bail” without compromising durability. The small body and Zaion housing are feather-light but sealed, so you don’t have to worry about water intrusion compromising performance or causing corrosion. A magnetized oil seal located on the main shaft of the reel’s rotor adds even more protection, keeping dust, water, and salt out.

Daiwa has many super high-level spinning reels that take open-faced technology to the next level. Still, the Ballistic LT splits the difference between perfect performance on a wide variety of species and affordability. 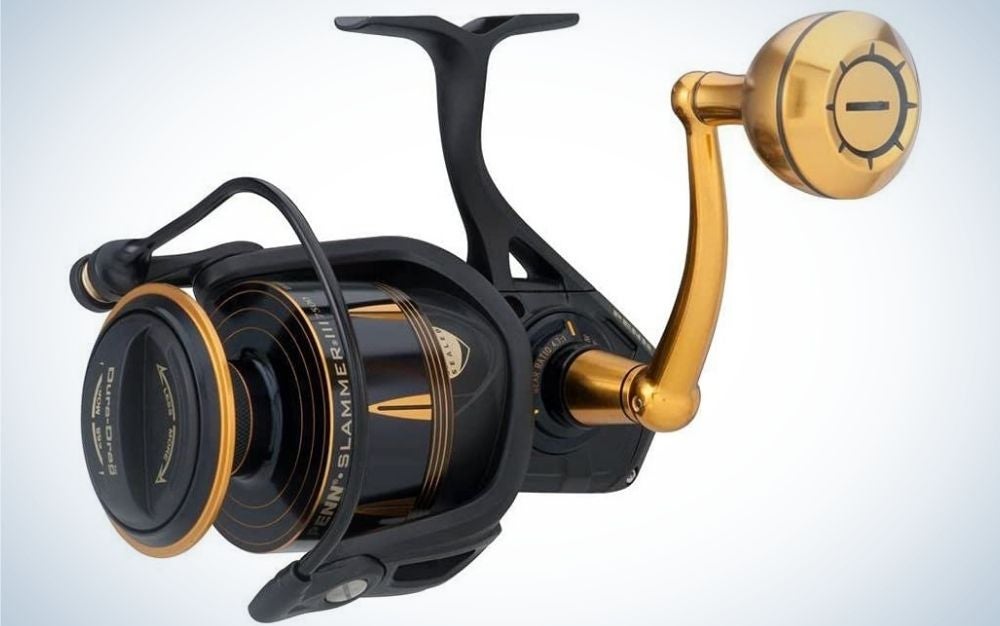 The Slammer series is at the top of the list when it comes to saltwater reels. This reel will keep out any dirt, water, or debris anglers encounter in harsh saltwater environments.

Penn designed the Slammer series of reels to take abuse. They’re sealed to keep water, sand, grit, and other debris out of the gearbox and drag system. Penn also beefed up the drag to handle line-ripping runs from all sorts of hard-fighting fish. The bail can be tripped automatically on the smaller sizes, while it must be done manually on the larger reels. The Slammer III is available in both a distinctive black and gold pattern, as well black and red, meaning that not only is it functional, but it will look great in a wide variety of scenarios.

For decades, Penn has been a leading light in the saltwater reel market, making ultra-durable products to combat the most damage that fish and the elements can dish out. This reel builds on that history to produce a reliable product capable of taming the biggest species the salt can offer. 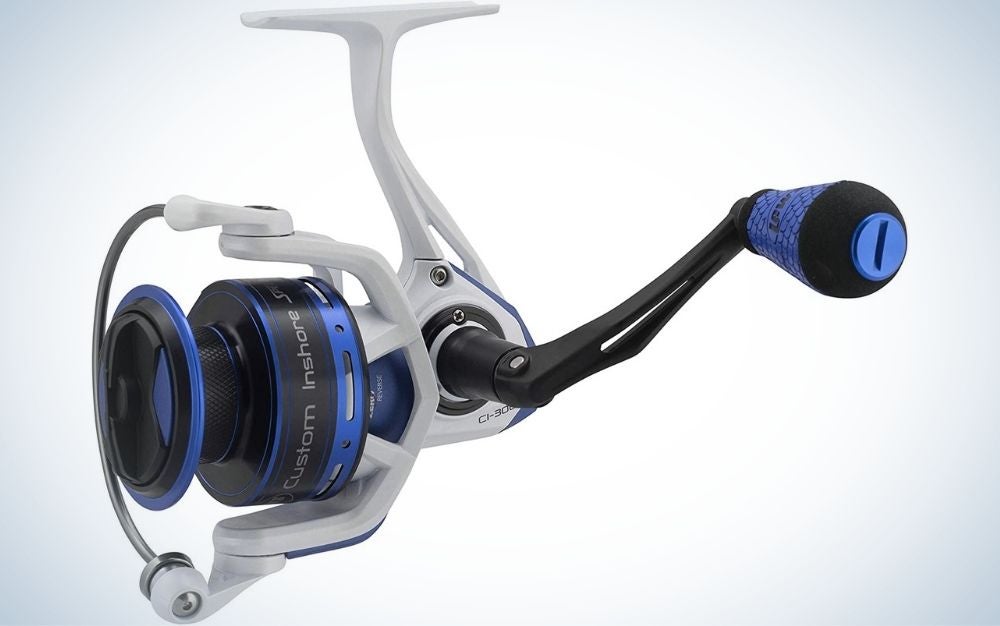 Coastal anglers need a reel that can not only withstand and repel the harsh forces of saltwater but also tame the mean fish that live in it.

These white reels with bright blue accents and a slip-resistant black and blue Winn Grip knob are made to be both lightweight and strong. They feature aluminum frames and side plates, as well as Speed Gears with an aluminum pinion gear. The reel has a flush and drain port, which means that whether you drop it in the drink or take a wave over the bow, there’s a quick and easy way to clean things out. A feature that saltwater anglers will love.

Saltwater anglers, or anyone that tangles with strong fish, will benefit from the Custom Inshore Speed Spin’s carbon fiber drag system. The sealed drag generates up to 24 pounds of stopping force in the 4000 size, so you can put the brakes on smaller reds and schoolie stripers.

For a reel that’s not exorbitantly priced, this one packs many features into a braid-friendly and salt-resistant package. A good bargain even for those who will never come within a cast’s length of the coast.

Many spinning reels look alike, but it’s what’s under the hood that makes a difference. To make my selections, I examined a wide variety of criteria.

Things to Consider Before Buying a Spinning Reel

The species you’ll be fishing for is a primary concern. While just about any lightweight reel may suffice for panfish or small stocker trout, larger and stronger fish require a more robust tool. You’ll need a reel capable of holding enough braid, monofilament or fluorocarbon (or a combination of two of them) so that you don’t get spooled. Buy a reel that holds a little more line than you think you’ll need.

Any reel you choose should have a smooth drag system. But you’ll also need to make sure that there is enough drag pressure to stop the fish you are pursuing. You can put the brakes on bluegill pretty easily, but if you chase large predators like pike or strong saltwater fish, you’re going to need a much stouter drag system. Always match the reel to the size of the fish, erring on the side of extra drag.

Different fishing techniques call for different retrieves. When you’re picking a reel, make sure you choose one with a gear ratio that meshes with the fishing style you’re going with. Select a high gear ratio if you need to move baits in a hurry, or a lower one if you need the power to winch fish out of cover.

You also need to match the reel to the rod you’ll be using it with. Even the best reel with the greatest number of bearings and the most refined drag system won’t cast, retrieve or battle up to its capabilities if it’s not part of a matched set. Too large a reel will fatigue you quickly with the added weight. Too small a reel won’t balance well, and casting distance could suffer.

What is a good cheap spinning reel?

The 13 Fishing Source X packs a lot of features into its frame, despite a relatively paltry price tag. It’s not available in a lot of different sizes, but if it fits your line capacity needs it’s a solid bargain for beginners and experts alike.

Are expensive spinning reels worth it?

If you’re chasing fish that pull drag in harsh environments, spending extra money on your spinning reels usually pays off because they’re more durable and won’t bind up at inopportune times. Look for better bearings and drag systems as two indicators of needed quality.

What is the best all-around fishing reel?

There’s no such thing as a reel that’s perfect for every situation and every species, but if you’re looking for a setup with the widest range of applicability, choose a 3000 or 4000 size spinning reel. Fill it with braided line (sometimes with a fluorocarbon leader) and you’ll be surprised at its versatility with both small fish and giants alike.

The world of spinning reels is filled with a lot of winners—and a lot of duds. Fortunately, the technology and features in many of the mid- to upper-range models have advanced exponentially in recent years. Nevertheless, we still find it hard to beat the Stradics, which combine durability and ease of function. The only reason not to get a new one is if the one that you got a decade or more ago is still in flawless service to your game.