The CenterPoint CP400 gives new meaning to the term “tacti-cool,” combining HeliCoil technology and adjustable features for a sleek and speedy package 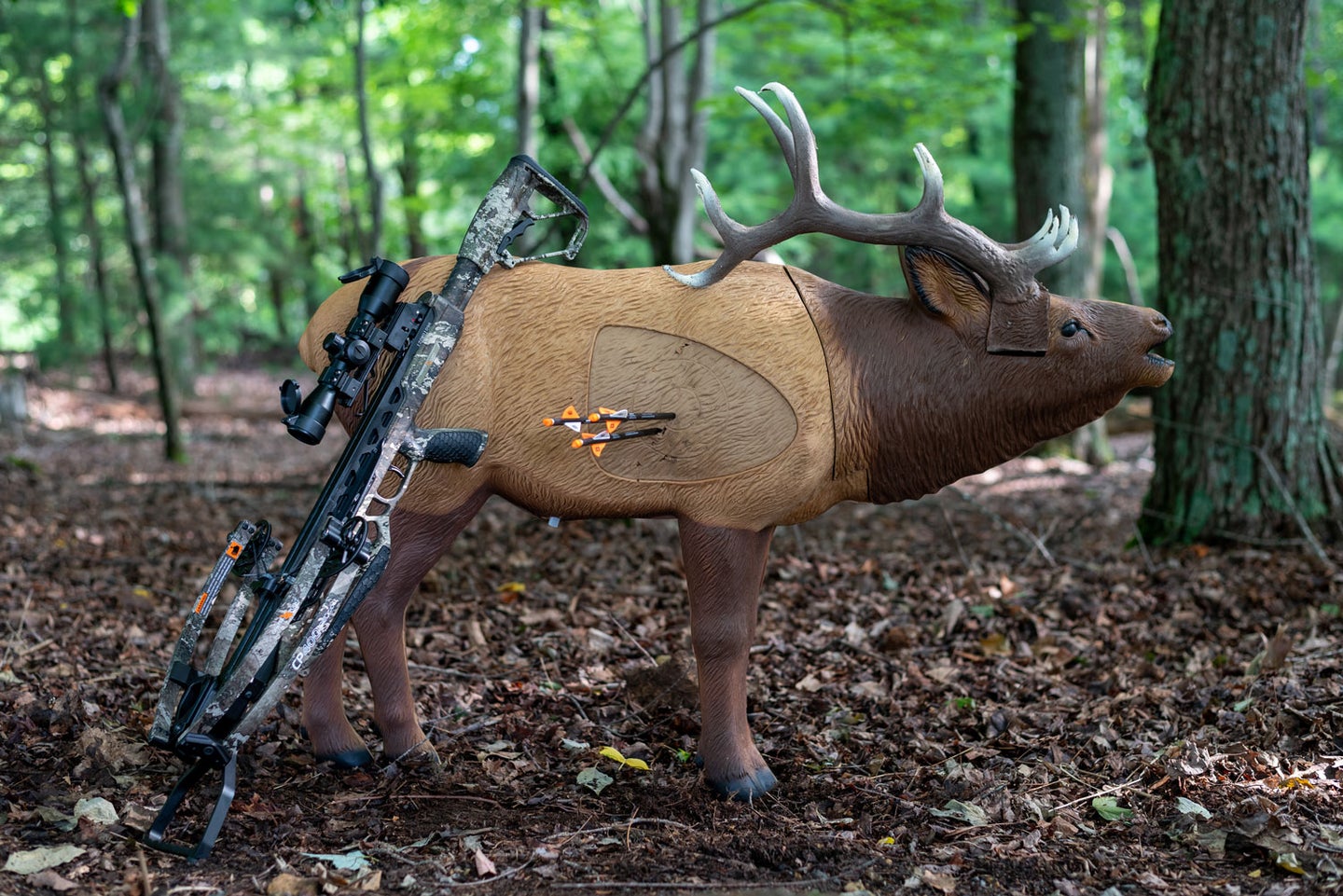 Don’t let this 30-yard group fool you. The CP400 could have placed these arrows much closer together at that range, but the author purposefully chose his shots so he wouldn’t damage them. Taylor Pardue
SHARE

The CP400 from CenterPoint Archery uses HeliCoil technology to produce incredible speed from a narrow width and without excessive cocking force. The crossbow’s stirrup can rotate down 90 degrees to serve as a bipod, making it stable even when shooting at longer ranges. The CP400 also includes a CenterPoint 3x32mm to harness its long-range accuracy. Add it all up, and this is one of the best crossbows at its, or any other, price point.

What Kind of Crossbow Is the CenterPoint CP400?

The Centerpoint CP400 is primarily a hunting crossbow built around the company’s HeliCoil technology. HeliCoil gets its name from the helical grooves in the cams that allow the cables to “coil” away from the top and the bottom. Doing so rotates the cams 340 degrees and keeps them balanced along the way. This results in impressive speed and accuracy, with a compact overall design as an added benefit.

How We Tested the CenterPoint CP400

I tested my CP400 by shooting the 20-inch carbon arrows and 100-grain field points that CenterPoint ships with it through a chronograph. My digital arrow weight scale put the average total arrow weight at just a hair over 400 grains.

Next, I shot a Rinehart 1/3 Scale Woodland Elk foam target from 20 to 80 yards in 10-yard increments. I used a Primos Trigger Stick Gen 3 tall tripod to steady the CP400 out to 50 yards, then I switched to using the crossbow’s integrated bipod at 60, 70, and 80 yards.

I would normally have used a trigger pull scale to measure the CP400’s trigger weight, but this crossbow was so fast that, had I fired it at a close enough range to ensure hitting the target, I would have probably blown clean through the foam. (The 1/3 Scale Woodland Elk is rated for crossbows, but given the fact that I have tested broadheads on this target in the past, the CP400’s arrows were often able to go halfway through the target even at 80 yards.) Suffice it to say, the trigger was crisp and light enough to produce the accuracy mentioned below

How the CenterPoint CP400 Performed

The CenterPoint CP400 is pretty much the fastest crossbow you’ll ever need, clocking in at its advertised 400 fps with the aforementioned arrows. Some of its competitors are faster, but not by much, and they often cost a good deal more in order to be so. A sub-$1,000 crossbow that can spit arrows at 400 fps is a tremendous value, and when paired with this CenterPoint 3x32mm scope, it becomes even more so. Be sure to buy a target that is specifically rated for crossbows. You can often get by with standard targets for slower crossbows, but not with the CP400.

The CP400 is flat-shooting because of its speed, and the stirrup bipod definitely helps keep things steady on long shots. When paired with the scope, I was able to easily hit my target out to 80 yards. I’d recommend adding a bubble level to the scope’s Picatinny rail, though. I noticed that a few of my longer shots were hitting to the left. I was on a slight slope and thought I had corrected for it in my hold, but I apparently had not. When I finally did, the CP400 went back to drilling the target.

I tested the CP400 with a rope cocker and one of CenterPoint’s aptly named Silent Crank cocking devices—both of which were effective. There was a bit more cocking effort required for the CP400 than with slower crossbows, given its 200-pound draw weight, but that’s to be expected from such a fast rig.

The CP400 wasn’t loud, but it wasn’t exactly quiet, either. The crossbow features two string stoppers made of gray polymer that CenterPoint claims also help with string vibration and noise. I didn’t hear much improvement, but I certainly wouldn’t let that keep me from considering this crossbow for hunting.

The CP400’s light weight, short length, narrow width, and textured inserts on the pistol grip and forend made this crossbow a breeze to carry and operate.

The CP400’s fit can be adjusted via a telescoping buttstock similar to what you’ll find on an AR-15. The stock itself is MILSPEC, but the buffer tube is slightly undersized to allow the Silent Crank to be mounted on it. I set the CP400 up against a poplar to take some photos while conducting my review. I was trying to highlight the crossbow’s narrow axle-to-axle width, but upon reviewing the images, I also noticed how seamlessly its TrueTimber camouflage blended into the trunk. The pattern just plain works.

What this Crossbow Does Best

The CenterPoint CP400 is fast without getting crazy, and when combined with the scope, it is as accurate as you could ever hope for. The CP400 feels much lighter than its 7.1 pounds might suggest, and it has excellent handling thanks to its pistol grip and compact dimensions. Throw in the integral bipod, and the CP400 is a veritable sniper crossbow.

What this Crossbow Does Worst

The Silent Crank cocking device is quiet and effective and can be easily removed when not in use. However, I ultimately decided to rely on the rope cocking device instead. When the Silent Crank’s mount is installed, it just barely covers the groove on the back of the CP400’s action. This makes it impossible to opt for the rope cocking device in the heat of the moment. I suppose the crank mount could be installed farther out on the buffer tube to allow for both, but I felt it needed to be up against the “action” of the crossbow for best results.

The click heard when fully cocking the CP400 could be louder. I held the rope cocking device a little longer than necessary and then slowly let off pressure just to ensure the string was truly secure.

Does the CenterPoint CP400 Deliver on its Mission?

In my opinion, the CenterPoint CP400 is one of the first crossbows a hunter should consider if he or she is looking to get into the game. It’s about as fast as you’ll find on today’s market and comes at a substantially lower price than comparable offerings. It’s narrow to the point that you may feel like you’re carrying a rifle afield instead of a crossbow. With the included scope, it’s also accurate out to ethical hunting distances and beyond.

Sure, there are a few things I would change about the CP400, but none of them would keep me from picking one up for my personal use. Simply put, the CP400 may be one of the best crossbows for deer hunting around.