So, You Want to Shoot the Fastest Crossbow? Get One of These

The battle for the title of fastest crossbow continues to intensify. These five models excel at accuracy, performance, and, yes, speed 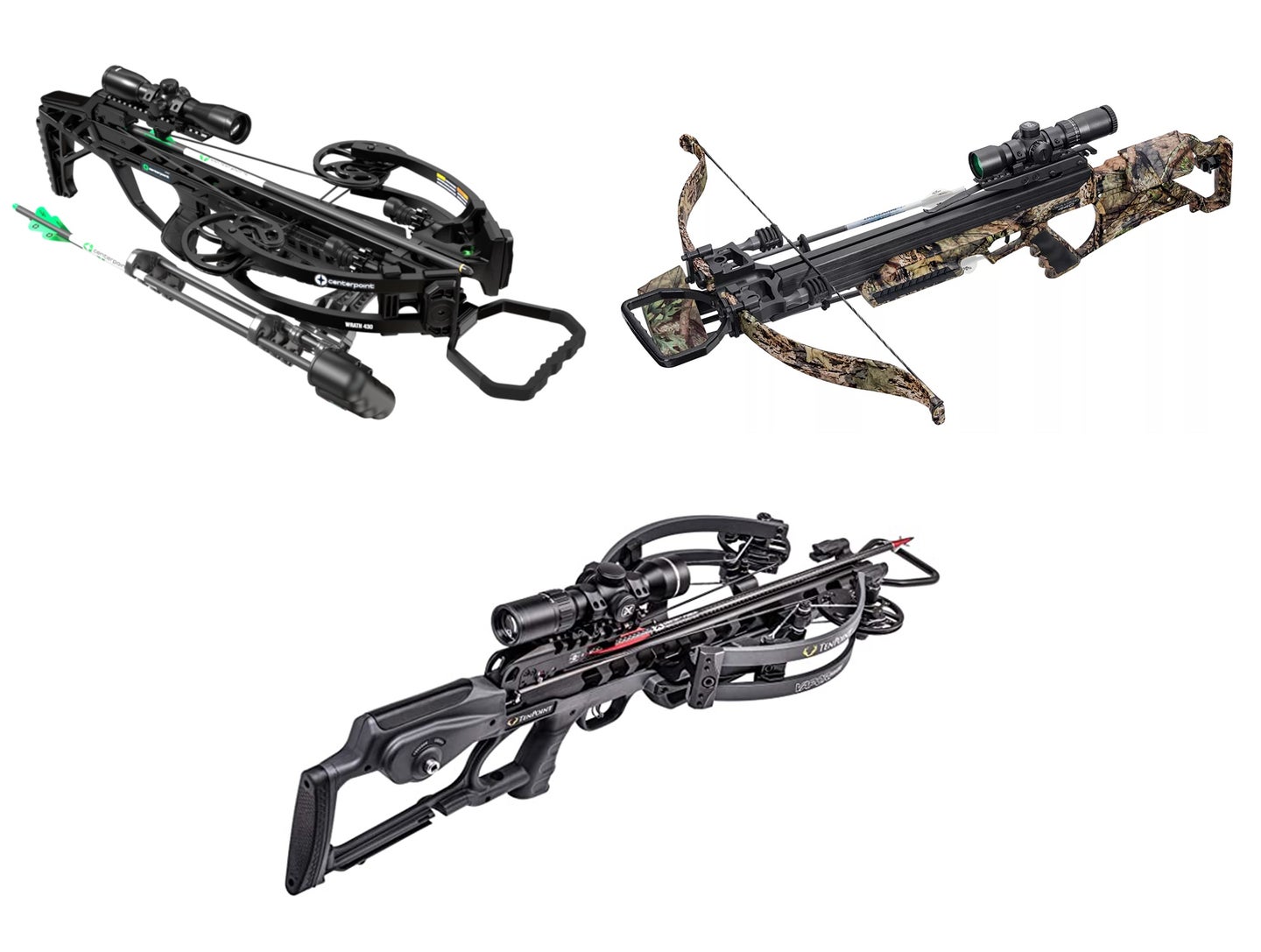 There’s fast. And then there’s the fastest crossbow in the woods kind of fast. You don’t “need” the fastest hunting crossbow available to be successful during deer season, but a little speed never hurts, right? Okay, so we’re talking about a lot of speed. We’re talking about hunting crossbows that easily top 400 fps—a figure once believed to be nothing more than a hope and a dream. That was then. Now, crossbows not only surpass that 400-fps mark, they do it while delivering consistent accuracy and a smooth shooting experience. These are hunting bows that are built to last for many seasons.

But which crossbows are the best of the fastest? Let’s take a look.

The fastest crossbows have more similarities than differences and that makes sense. In the race for speed, manufacturers learn from each other. When a system is developed that’s capable to delivering ultra-fast arrows, well, you can bet some variation of that system will soon be adopted by others.

To keep things honest, we’ll highlight the fastest model from some of the top brands in the crossbow hunting world. Every model has its own shooting experience, and my favorite may or may not match yours. We’ll hit on recommendations for a youth crossbow, compound crossbow, and recurve crossbow.

I’ve had a hand in a number of crossbow reviews over the years and have seen the steady progression forward in speeds. I’ve also seen crossbows get lighter, more compact and far more accurate. And, make no mistake, a fast crossbow is darned near useless in the woods if you can’t hit what you’re aiming at. Of all the advancements in crossbows, it’s the ability to consistently put an arrow on target at long distances that has been most impressive. The list we’re about to dive into is all about speed but each bow on it is a shooter as well.

The overall shot experience is not a small consideration either. When crossbows start to generate speeds over 400 fps, there’s an awful lot of power, vibration and force to deal with. The best models soak that up and deliver a smooth, recoil-limited shot that’s a heck of a lot of fun.

Okay, so this youth crossbow is actually an adult crossbow. At least, it’s not designated specifically as a “youth” model. But, measuring just 28.26 inches in length and spanning just 9 inches in width when cocked, the CenterPoint Wrath 430 unit is ideal for smaller hunters. It’s also attractively priced at $650, allowing you to introduce a new crossbow hunter to the game without taking out a second mortgage to do so.

CenterPoint is part of the same family as Ravin, which makes some of the baddest crossbows on the planet. That shared technology is apparent in the Wrath 430. It delivers 430 fps speeds using a wheel system similar to that on the top Ravin models for example.

It’s a bullpup design with the release located behind the trigger. This means a longer power stroke for increased speed without lengthening the overall bow. The stirrup is handy when using the rope cocker (you can add a silent cocking crank to the package for $100) and it doubles as a bipod which is ideal for younger hunters who may need some help holding up the bow’s 9-pound weight.

There’s all the safety features you’d expect, including an anti-dry fire system and safety that automatically engages when the bow is cocked. The crossbow comes as a complete package including 4×32 illuminated scope, three 400-grain carbon arrows with field points, a quiver and the rope cocker.

The HyperTac Pro 430 is the fastest Barnett crossbow available and has an impressive lineup of features that really exemplify the advances crossbow manufacturers have embraced in recent years. The integrated string hook system is truly unique and pairs with a top-end TriggerTech Zero Creep trigger that breaks at a crisp three pounds. The trigger uses TriggerTech’s Zero Release system that creates a free-floating roller between the sear and trigger for a remarkably smooth and light release.

The butt stock and cheek piece are each micro-adjustable for a truly custom fit to each shooter and the forend has an articulating flip-down grip for further customization. The cocking crank is integrated into the bow and can be released with the simple push of a button. The bow is compatible with SureShot monopods and features three picatinny rails for accessories.

Excalibur continues to stick with tradition and utilize classic recurve crossbow limbs. And with the Bulldog 440, it stays firmly competitive in the speed race as well.

As one might guess, the Bulldog 440 spits out arrows at an advertised 440 fps. Also as one might guess it takes a stout—very stout—set of recurve limbs to generate those types of speeds. But fear not, the Bulldog includes an external crank that requires just 15 pounds of effort to cock the bow. When fully cocked, the bow measures 23 inches in width. It’s 35.75 inches in length.

Fast is an understatement when it comes to TenPoint’s Vapor RS470. At 470 fps, the Vapor is a new definition of fast for TenPoint. As impressive as that speed number is, what’s more impressive is that the bow is extremely tame in the hand at the shot and is dead-nuts accurate downrange.

The RS470 is a reverse-draw system featuring a 17-inch power stroke. That means it generates tremendous speeds with less draw weight thanks to the elongated draw stroke that increases the distance in which the arrow is in contact with the rail, an important factor in downrange accuracy. When fully cocked, the bow measures a scant 6.5 inches in width.

The bow features a two-stage S1 trigger set at 3.5 pounds to further enhance accuracy. It also includes TenPoint’s new EVO-X Marksman Elite scope, which is speed-compensating up to 500 fps (any guesses as to what speed number TenPoint is hoping to hit next…) and has adjustable turrets for shots out to 100 yards.

Remember when 400 fps was deemed the “holy grail” of crossbow speeds? Yeah, neither do the folks at Ravin.

The Ravin R500 is the fastest crossbow available pushing arrows at a shocking 500 fps. To generate those speeds, Ravin developed a Hex Coil system mounted to a reverse-draw system that creates a bow that’s not only hyper fast but unlike any other crossbow we’ve seen before.

When cocked, the bow is just 3.6 inches in width and only 7.6 inches uncocked. The bow’s overall length is 28 inches, and it weighs 8.4 pounds. The bow uses a new VersaDrive cocking system that has an integral screw drive. This has also allowed Ravin to create an e-drive option that features an electronic cocking option to make crossbow hunting accessible to virtually anyone, even those unable to operate a cocking crank.

With crossbows generating these kinds of speeds and packaged with scopes that include reticles with 100-yard aiming points, the obvious question must be asked: Can you shoot a deer at 100 yards with a crossbow. The answer is yes. Or, actually, the answer is maybe.

A better question is: Is it ethical to try and kill a deer at 100 yards with a crossbow? That’s a tougher question to answer and one with an answer that might be better made on your own. I can say this: A lot of things can happen in the time it takes an arrow to travel 100 yards, even from a crossbow pushing 500 fps.

Q: How Many FPS Is a Good Crossbow?

Well, as stated previously, there are a lot of advantages in speed. An arrow that travels in a flatter arch gives a bit more of a margin for error when underestimating yardage. Greater speed increases kinetic energy, which can improve penetration and lead to improved recovery rates on game. That said, a well-placed arrow from a 300-fps bow will kill a critter just as dead as one from a 500-fps crossbow.

Q: What Is the Fastest FPS Crossbow?

So, what is the fastest crossbow on the market? With the introduction of the R500, Ravin is the king of speed. But take note: TenPoint’s latest crossbow scope is speed-compensating up to 500 fps. Seems to me that’s a pretty clear indication that they’re on track to challenge for the crown. But, then again, Ravin’s new scope boasts speed-compensation of up to 500 fps. So, it would seem this race is far from over.