FX’s Dreamline lives up to its name, with impressive accuracy and excellent ergonomics. 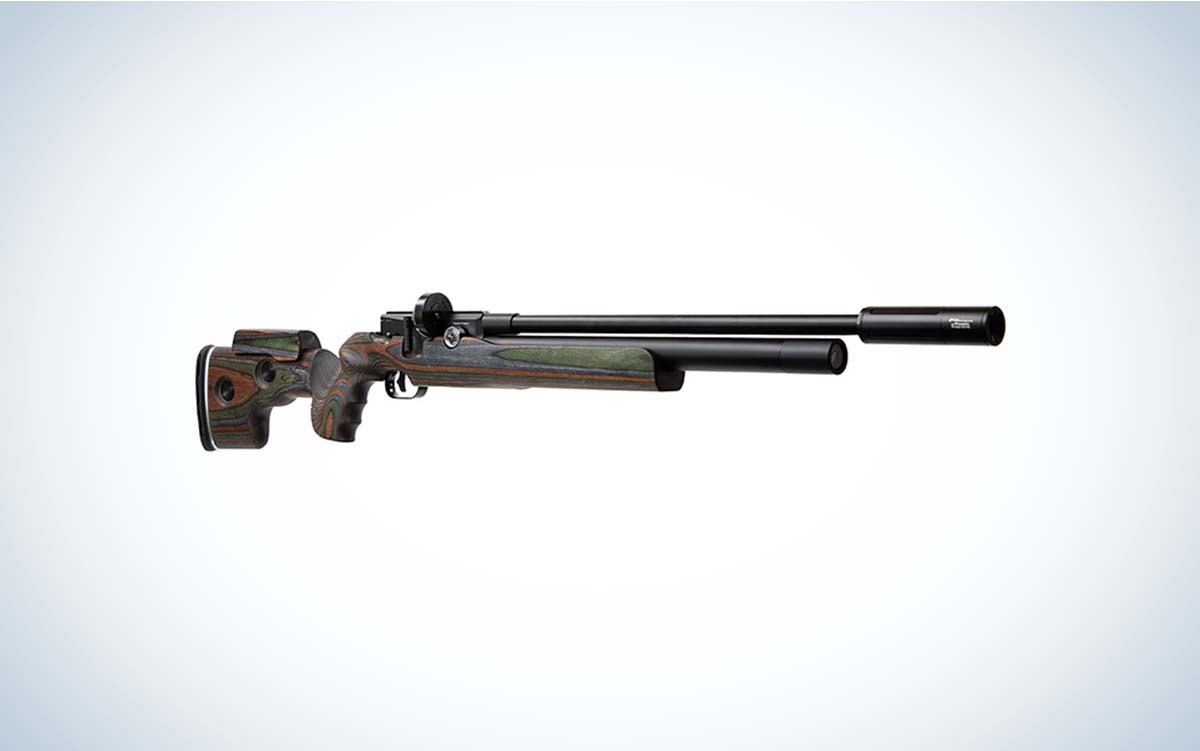 The FX Dreamline Classic airgun is a precision-crafted, powerful and accurate pre-charged pneumatic air rifle. FX produces the Dreamline in a variety of configurations, and the line further boosts the ability to change configurations in addition to calibers. The tested model features the highly adjustable and great-looking GRS Green Mountain Laminate stock.

What Type of Air Rifle is the FX Dreamline?

Made in Sweden, the FX Dreamline is a high-end PCP air rifle suitable for hunting or target shooting. An externally adjustable regulator, spring tension adjuster and a three-step transfer port adjustment allow for a wide range of tunes that can prioritize power, accuracy, or a balance of the two with a variety of projectiles.

How Does it Work?

The Dreamline Classic features a long, 250cc air cylinder under the barrel. The cylinder can be filled to a maximum of 230 BAR (3,335 PSI), using a ⅛-inch male probe that is inserted into a fill port near the muzzle end of the air cylinder. There is a pressure gauge on the end of the cylinder.

The rifle features a smooth, sidelever cocking system to operate a rotary magazine. The .25 caliber mag holds an impressive 16 rounds. (Magazine capacity ranges from 13 rounds in .30 to 22 in .177.) The large diameter of the magazine requires the use of high scope mounts. A manual safety is located above the two-stage, adjustable, match-grade trigger. The FX is easy to use and offers great performance straight out of the box but really shines in the hands of more experienced shooters who will want to take advantage of the rifle’s adjustability.

How I Tested the Dreamline Classic

I tested the FX Dreamline Classic over several months, shooting hundreds of pellets and hybrid slugs at ranges from 25 yards to 100 yards. With its fully shrouded barrel and the included DonnyFL moderator, the Dreamline Classic is quiet enough for backyard shooting (especially at lower power settings) but you’ll need a good-sized yard because shooting at close range — at least off a rest — can get boring fast because the gun is so accurate.

Let’s talk first about the GRS stock, a $400 upgrade from the walnut-stocked version. There’s a reason we’re seeing more high-end guns with stocks from this Norwegian company. Not only is the laminate gorgeous, but it also has great ergonomics, with an angled grip and a cheek piece and buttstock that are easily adjustable without tools. A lefty grip option is also available. The pistol grip is a bit on the large side so it will be most comfortable for those with medium- to large-sized hands. The wide forestock provides a solid base for benchrest shooting and features a UIT (Anshutz) rail for accessories, such as a bipod. Our test rifle arrived with the Element Helix 6-24 x 50 FFP scope, a solid mid-priced (about $500) piece of glass. Total weight of the rig, including the scope, was 9.4 pounds.

Loading the magazine requires removing a clear plastic top, rotating the spring-loaded mag to wide open and inserting one round, which locks the magazine in place. It’s a super easy process. The side-cocking lever is silky smooth and takes very little pressure to cock. Not once did it miss a feed.

FX rifles are well-known for their accuracy and the Dreamline Classic did not disappoint. Like other high-end FX rifles, including the Impact, Crown and Maverick, the Dreamline features FX’s innovative Smooth Twist X barrel liner, in which the rifling is pressed from the outside. That reduces resistance and makes for easier cleaning. Liners are easy to change, allowing shooters to change calibers and twist rates to maximize performance of different projectiles. The Dreamline Classic comes standard with a 500 mm barrel.

After pulling the rifle out of the box, I raised the rings to their highest setting to make room for the magazine, topped off the air cylinder and had the rifle zeroed at 25 yards before the first magazine was empty.

In this case, “zeroed at 25 yards” equated to a single hole less than half-inch in diameter while shooting off sandbags. At the range for the first time, it took just a few clicks on the scope’s elevation adjustment to dial it in for 50 yards. I kept the zero at 50 yards. For longer range shooting I just relied on holdover, which was easy with the APR-2D MOA reticle on the Element Helix.

Diabolo-shaped pellets performed the best at 50 yards, though FX Hybrid Slugs were almost as good. Half-inch, ragged single hole groups were the norm. One day I tried some Beeman Crow Magnum hollow points that I had lying around and the group expanded to about an inch, but the wind was pretty stout that day so they’re probably not that bad.

The factory tune produced consistent velocities in the 830 feet per second range with the 25.4-grain FX Diabolo pellet. The regulator performed well, with most shot strings showing velocity variations of no more than 10 fps. I eventually bumped the regulator up a bit to 135 BAR and significantly increased the spring tension. That pushed the velocity up to a consistent 880 fps, creating roughly 43 foot-pounds of kinetic energy.

The more powerful tune produced my best groups, including one 50-yard five-shot group that measured ⅜-inch across. Ragged single-hole groups were the norm at 50 yards if the wind wasn’t too squirrely. My best four-shot group measured just .30 inches. Unfortunately, the fifth shot was a bit of a flyer and didn’t even touch the first hole. That hurt.

Groups loosened up at 100 yards, but it wasn’t unusual to put most shots from a magazine into a two-inch group. FX Hybrid Slugs grouped better than pellets at long range, even though the included barrel liner was not slug-optimized. Under the right conditions, with an appropriate barrel liner and tune, the FX Dreamline is certainly capable of 1-inch groups at 100 yards.

The trade-off for more power is fewer shots per fill, of course. I typically got close to two magazines worth of full power shots per fill. Switch the transfer port to medium power and you’ll get double that, at least.

What the FX Dreamline Does Best

With a great combination of power and accuracy, the FX Dreamline Classic can be a fine hunting rifle. But add the GRS laminate stock option and what you have is a rifle that really stands out at the range. It will turn heads with its appearance and performance. The highly adjustable stock will help just about any shooter find a great position and maximize the rifle’s potential.

What the FX Dreamline Does Worst

The FX Dreamline with the GRS laminate stock option is not an overly complicated air rifle and is capable of excellent performance out of the box. However, shooters looking for a simple plinker or a hunting rifle to carry for miles through the woods have more practical and more economical options — including other Dreamlines. In this configuration the Dreamline Classic begs to be tuned and tinkered with, and also excels when outfitted with good glass. Sure, there will be some casual shooters willing to invest north of $2,000 for this rifle and a good scope. But this is really a rig for avid enthusiasts.

Does the FX Dreamline Deliver On its Mission?

With the GRS laminate stock option, the FX Dreamline Classic is designed as a great shooter that also features striking, attention-grabbing appearance. It fills that role just about perfectly.