The R29X is incredibly fast, accurate, and compact. It's also the best crossbow we've ever tested to date 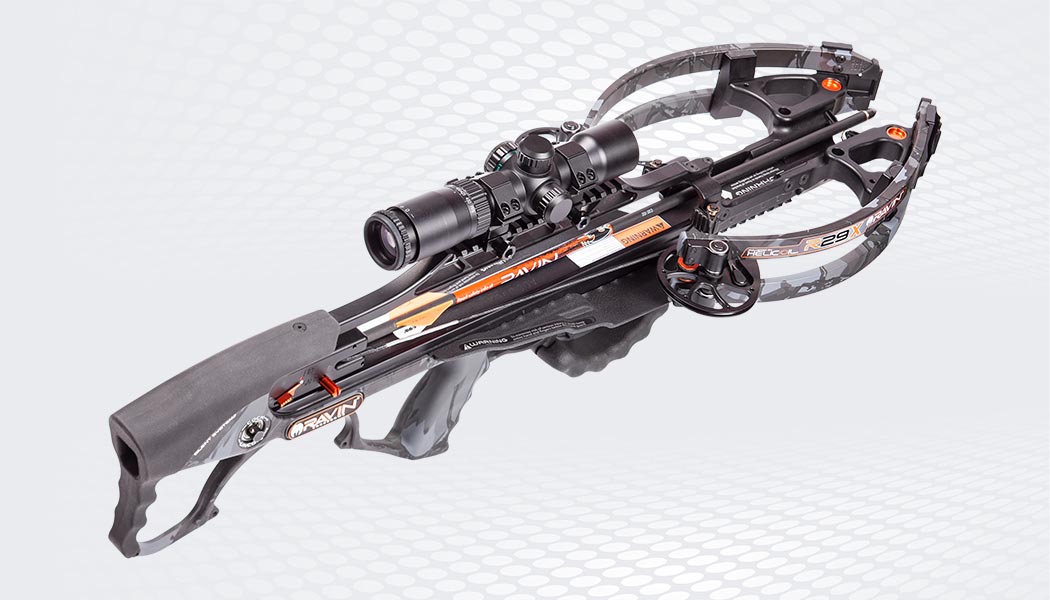 The Ravin R29X shoots at a sizzling 450 fps. Ravin
SHARE

The first Ravin crossbows launched with an ad campaign promising rifle-like accuracy at 100 yards, and they could back it up. Since their debut with the R15 in 2017, a Ravin crossbow has won our annual crossbow test every year except for one, when they narrowly finished runner up. The Ravin design is so good—and so unique in a number of ways—that only a few models from other brands have ever posed any serious competition to them.

The Ravin R29X was the winner of our 2020 crossbow test, and going by the numbers, it’s to-date the best crossbow we’ve ever tested. It’s still available from Ravin with a couple accessory package options. The standard package includes a scope with six bolts and a quiver. The Sniper package, which costs more, includes an upgraded scope, along with a jack plate adjustable elevation mount (for extreme-range shooting), scope level, six premium bolts, and quiver. The crossbow itself is the same for both packages.

The R29X is a high-end “flagship” level crossbow designed for serious hunters who don’t mind paying for performance, and especially for hunters looking to extend their effective range. We don’t condone 100-yard shots at game with a crossbow, but the R29X is capable of it under the right circumstances.

All Ravin crossbows use the same HeliCoil cam system, which allows the cams to rotate 340 degrees for crushing power in a compact package. Ravin does not publish draw weight figures, and instead publishes the required cocking effort (more on that system in a bit). That makes sense because, like many high-performance crossbows, it’s impossible to cock a Ravin by hand.

One loaded, the bolt is supported in the bow via a traditional nock and a rest at the front of the bow; there is no contact with a barrel in between, and that’s a recipe for excellent accuracy. Ravin crossbows have all used the same 400-grain finished arrow, and the Ravin R29X is the fastest of them yet.

How We Tested the Ravin R29X Crossbow

The R29X was tested in spring of 2020 as a part of our annual flagship crossbow review. The test is an invitational, where we test all crossbows submitted with their factory-provided bolts, scopes, and accessories. We began by assembling them as needed and sighting them in. For each bow, we averaged the speed of three shots through a Caldwell chronograph and then weighed the bolts to calculate kinetic energy.

We then measured trigger-pull weights with a Lyman scale and subjectively evaluated them for creep, travel, and overall feel. We tallied accuracy scores by measuring three, three-shot groups from a Lead Sled atop a D.O.A. Shooting Bench at 50 yards, into a Rinehart bag crossbow target. We further evaluated the bows for cocking effort (some are far easier than others), safety (some still don’t have auto-safeties or require you to put fingers where fingers shouldn’t be during operation), fit and finish, handling, and value.

As of this writing, the Ravin R29X is the most accurate crossbow we’ve ever tested. Three-shot groups averaged just 0.7 inches at 50 yards (we busted a few bolts in the process). Nothing else in the test came close to that level of accuracy in 2020. The Ravin R29X was the fastest crossbow of the test to boot, and it actually exceed its advertised speeds by almost 7 feet per second, according to our chronograph. It also had a great trigger, with an average pull weight of 2.03 pounds.

Besides accuracy and raw power, one of the biggest benefits of a Ravin crossbow for hunters is the signature compact design, which makes the crossbow easier to handle in a treestand or ground blind. The R29X is just 6 inches wide when cocked. Thanks to the HeliCoil system, shooters get the benefit of a long power stroke (that’s equivalent to a crossbow’s draw length) without a gangly barrel. In fact, with a 12-inch barrel, the overall length of the Ravin R29X is just 29 inches.

Still, all Ravins that we’ve tested have been fast, accurate, and compact. The R29X’s biggest contribution to the platform is its Silent Cocking System, which eliminates the previous models’ signature boat-trailer-ratchet-like sound that could be plainly heard on a still morning from 100 yards away. Engage the sear, wind the handle, and the bow’s string is drawn into place easily, safely, and silently. That and a solid, positive safety mechanism earned the R29X maximum points in both our cocking effort and safety categories, which are important categories to consider in a crossbow.

What the R29X Does Best

This crossbow offers maximum performance across the board in a lightweight, nimble package. For hunters, it’s just about the all-around best crossbow for the money available right now.

What the R29X Does Worst

Ravin crossbows have not been on the market long enough yet to judge long-term durability and reliability (not that we have any doubts on that; it’s just a fact at the moment). Plus, they’re very expensive, on par with high-end custom rifles. And unlike rifles, crossbows don’t hold their resale value well. If you’re a casual hunter who shoots a whitetail or two inside 30 yards each season, you can buy several less-expensive crossbows for the price of one Ravin, and probably make do just fine.

Does the Ravin R29X Deliver on Its Mission?

If you test gear for a living, it’s rare to see something that’s as influential as the Ravin crossbow design has been. Though we don’t have access to sales figures, they’ve arguably become the most popular crossbow brand on the market in just a few short years. We initially wondered if hunters would be willing to pay such exorbitant prices for a crossbow. That the R29X Sniper package is currently sold out (as of late June 2021) on the Ravin website is a testament to how popular these crossbows have become.

Fact is, in states where crossbow hunting is legal, a high-performance bow like the Ravin R29X offers a serious hunting advantage, particularly at longer ranges and in specialized situations, like box-blind hunting and spot-and-stalk hunting. Their portability and pinpoint accuracy makes them excellent turkey hunting tools as well. All told, the R29X was the best crossbow available in 2020, and still one of the best money can buy today.