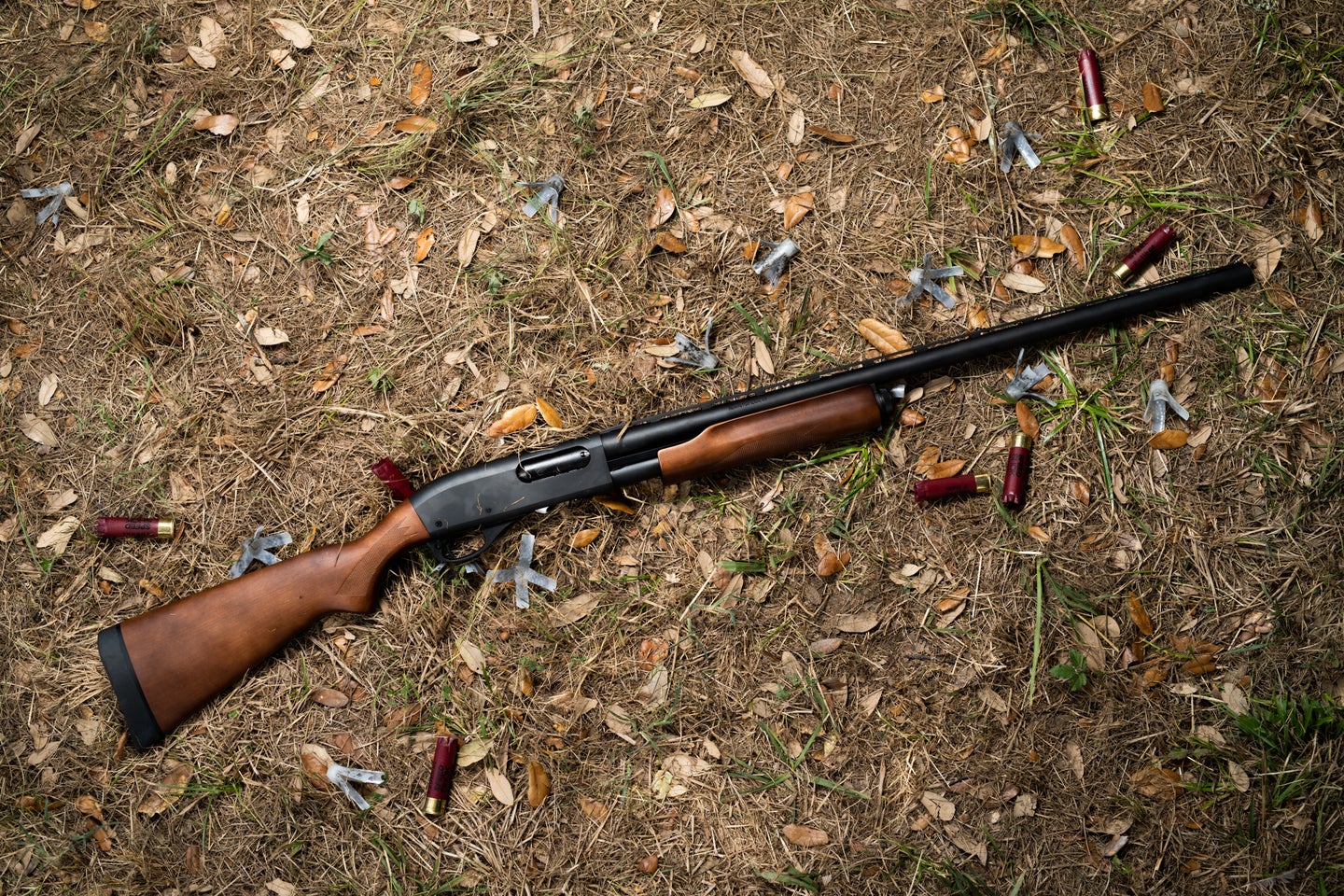 The Remington 870 has served generations of sportsmen. Stephen Maturen
SHARE

Introduced in 1950, the Remington 870 has become not just one of the most popular Remington shotgun models but the most popular shotgun ever made, with over 11,000,000 coming out of the factory in Ilion, New York. The Remington 870 has been made in every possible configuration, and it’s a classic piece of hunting gear you’ll find in almost anyone’s gun cabinet, no matter what game they pursue. It has earned a reputation for reliability in the field, at the range, in police cruisers, and on the battlefield.

In 1987, Remington began making the 870 Express, lowering costs by using a hardwood stock in place of walnut and skipping one polishing operation. The Remington Express 870 12 gauge quickly became one of America’s top two budget shotguns, leading to endless “Remington 870 vs. Mossberg 500” duck camp debates. We tried to settle that debate—or at least come up with our answer—when we took 17 shotguns duck hunting at the Pintail Hunt Club in Garwood, Texas, during the September teal season. The Remington 870 Express we brought was one of the first guns out of the factory since bankrupt Remington Arms came under the ownership of RemArms in 2020.

What kind of shotgun is the Remington 870 Express?

Our test gun was the most popular Express configuration: a 3-inch, 12 gauge with a hardwood stock and 28-inch barrel. Like every 870 ever made, it’s a pump action, with a slide that runs on dual action bars to prevent twisting and binding. Although the Express is a bargain gun, and thus the first shotgun of many people and the only shotgun some ever own, it’s hard to find any hunter who doesn’t own one.

Everyone needs a rugged, dependable shotgun that they can rely on to take abuse and keep on working, and that’s the 870’s reputation. And, because it has interchangeable barrels, your waterfowl hunting gun can quickly make the transition to a Remington 870 home defense gun. Along with extra barrels, there are countless aftermarket Remington 870 parts for sale, allowing you to make the gun into almost anything you want it to be.

How We Tested The Remington 870 Express

Pump guns are all about reliability. It’s why we shoot them, and the truth is, 870s fell down in that regard in the final years of Remington Arms. When we gave the RemArms version its initial inspection, we were concerned. As we did with all guns, we looked at it, and we cycled the action. The pump stroke was slick enough, but the inside of the barrel showed visible tool marks, and we were concerned about the gun’s quality.

So, as we did with every gun, we shot it a lot. Like so many waterfowlers, we had all shot pumps once upon a time but had moved up to semiautos, and we rediscovered the fun of working a pump on this trip. In particular, Outdoor Life’s Alex Robinson, at the other end of the line of guns from me on the second morning of the hunt, was clearly having a ball when his turn came to shoot the 870.

We shot the gun at Pintail Hunt Club’s five stand range, where the targets come in a random flurry, and you can empty a gun quickly. Once we knocked the rust off our pump strokes, we could all run the 870 fast enough to keep up with the endless stream of targets.

We weighed the Remington 870 Express, coming up with 7.6 pounds total weight, which is right in line with the weight of every Express I’ve ever handled. The trigger pull, measured on a digital scale, was 5.3 pounds, and it, too, felt familiar, without too much creep or grit to it like most 870 triggers. We used Modified chokes in all the guns at the pattern board, which is good for the 870, as Modified is the only tube supplied with the gun. At 35 yards, the gun shot impressively tight, 80-82% patterns with Federal Speed-Shok 3-inch, 1 ¼ ounce loads of 2 shot. In fact, that’s so tight you might want to buy an aftermarket Improved Cylinder choke for the gun for ducks over decoys.

How this Remington Gun Performed

The gun had the familiar feel of every Express ever: decent heft for a duck gun and some weight-forward balance to help it swing smoothly. The action was more than slick enough to keep up with all the clays in the air at the 5-stand, and the gun never malfunctioned. The stock fit all of us well, and the gun pointed and swung smoothly. The hard rubber butt pad does keep the gun from slipping if you lean it against something, but it is worthless for mitigating recoil.

Even as one who prefers the plainest wood to plastic, I’ll admit the wood on this gun was nothing to write home about, with its dark stain and pressed checkering. The metal finish was typical Express, too, a matte gray-blue that rusts easily. And, as I mentioned, there were visible tool marks inside. Nonetheless, the gun ran smoothly right out of the box.

While best-suited, in my opinion, to waterfowling, the Remington 870 Express can do anything. I’ve seen kids run 100 straight trap targets in competition with an out-of-the-box 870, and plenty of pheasants have been shot with them, too. With so many Remington 870 accessories and barrels available for home defense, tactical, deer, and turkey hunting applications, you can use one 870 Express for almost any purpose.

I was concerned about the reliability of this gun because I have seen so many 870 Expresses have problems mostly related to fired hulls sticking in roughly finished chambers. RemArms assures me they are carefully inspecting every gun leaving the plant and rejecting all the bad ones, and this gun certainly functioned perfectly for us.

Selling for around $400, the Remington 870 Express gives you excellent value for the money. That value and its reliability make it a gun that has a place in any conversation about the best waterfowl hunting shotgun. And, because there are so many parts available for it, it’s a versatile platform you can build on with aftermarket parts and barrels.

What the Remington 870 Express does best

It works. That’s the bottom line for any shotgun, and our 870 Express shucked smoothly and cycled Federal Speed-Shot, Remington target loads, and HeviHammer ammunition. It also produced excellent patterns from its single choke tube. The Remington 870 is also underrated as a shootable gun. It has trim lines thanks to a receiver originally borrowed from one of Remington’s 16 gauge semiautos and a stock design that fits a wide range of shooters.

It offers versatility at a very low price, as there are so many parts and barrels available to make one 870 Express work for almost any specialized purpose. And, while we tested a hardwood stock version, synthetic stock models are also available.

What the Remington 870 Express does worst

It kicks. Although its weight absorbs some recoil, the Remington 870 Express is still a fixed-breech gun with a rock-hard rubber pad. You can definitely feel it go off. Recoil wasn’t overly punishing, but it was definitely noticeable in this Remington pump shotgun. And, a gun that’s used by so many people as a bad weather, bottom-of-the-boat gun should have a finish that doesn’t rust so easily.

Some of our testers found the thin, stamped slide release button to be too small and difficult to find and press with gloves on. And, although a Modified choke will see you through most waterfowl hunts, pheasant hunts, and 16 yard trapshooting, it should come with more tubes to make it more versatile. You’ll need to spend a few extra dollars on at least a couple of Remington 870 parts:  an Improved Cylinder and maybe an X-full turkey choke to make your gun more versatile.

The Remington 870 Express was one of the most pleasant surprises of the guns we tested for the waterfowl shotgun review. The years I coached high school trap from 2009-2019 coincided with some of the worst years of 870 Express quality. I’ve seen countless high school trap shooters have problems with shells sticking in rough 870 Express chambers, and I was delighted to find RemArms has ramped up quality control to alleviate the problem.

All of us enjoyed shooting the gun at clays and ducks, and while it may not be much to look at, and it could use a softer recoil pad, it’s an affordable gun that won’t let you down, and that counts for a great deal when you’re looking for a duck hunting shotgun. If you’re a hunter on a budget, it’s a great choice. If you’re an experienced hunter who wants a bad weather gun, or a backup gun, or a gun to loan to guests, it’s an equally good choice. The 870 Express is an American classic, and judging by our test gun, it is back, working as well as it ever has.