The Spypoint Link-Micro-S is a great trail cam for the money, and ideal for a hunter's first cellular game camera 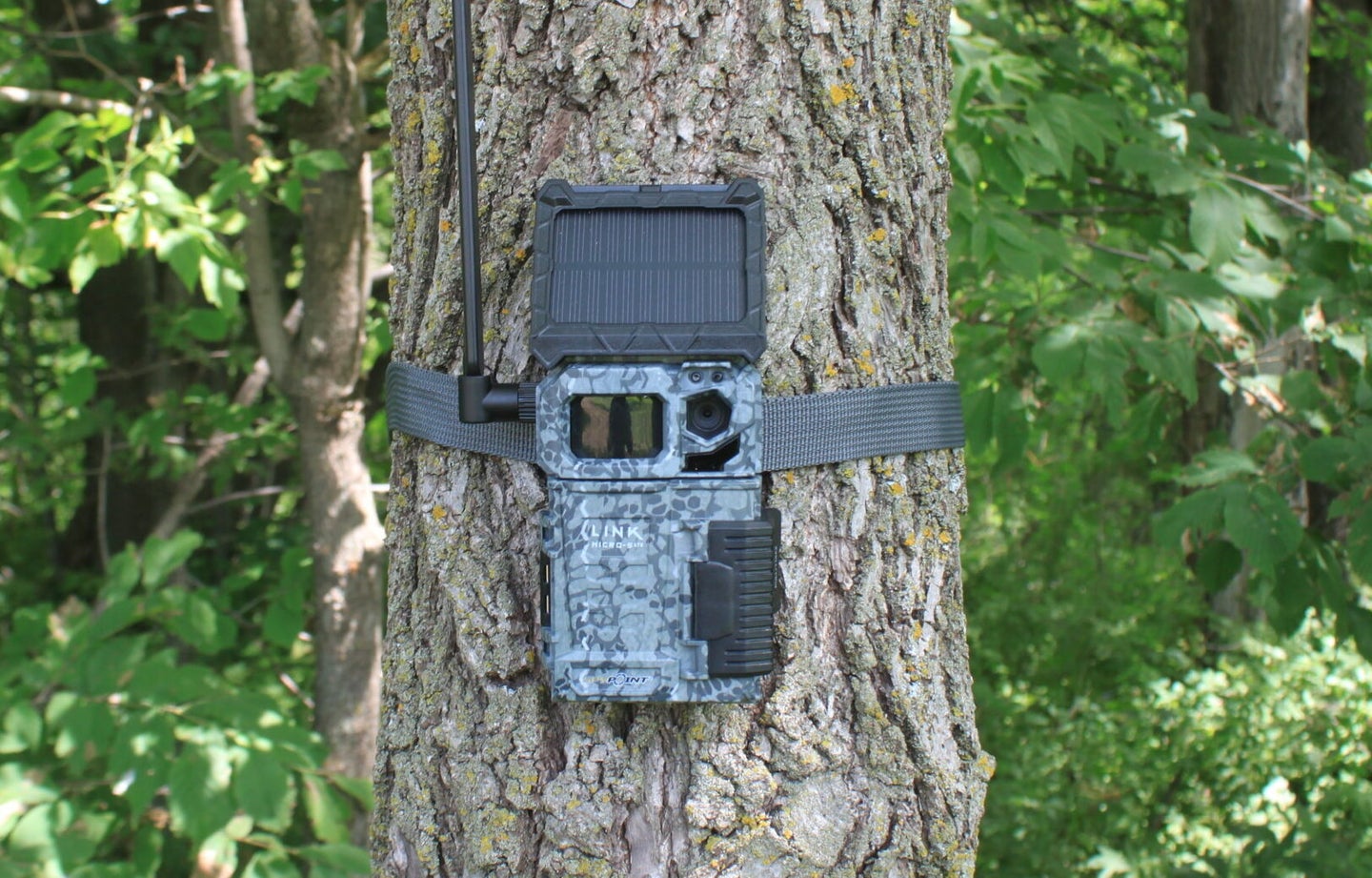 Cellular scouting cameras are still relatively newcomers to the hunting world, and most companies are happy to simply bring one to the market. Spypoint, which has been in the wireless camera game from the beginning, is pushing the envelope with the Spypoint Link-Micro-S, which introduces some great features at a price that will surely draw some attention. In addition, Spypoint’s data plans are some of the most affordable and innovative, making the Link-Micro-S Celluar Trail Camera worth a hard look from anyone serious about wireless cams for scouting. 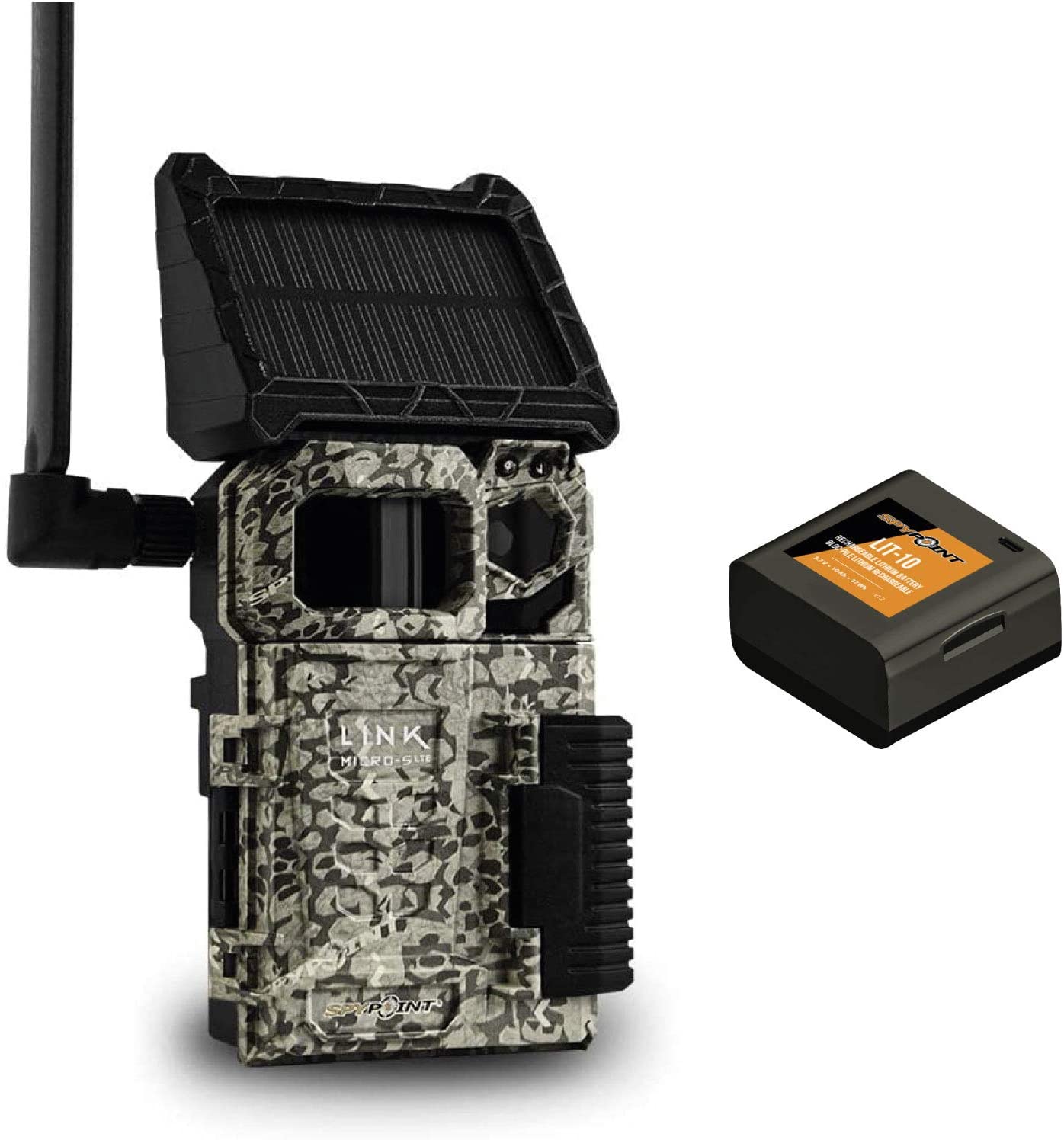 A rechargeable battery pack and a low price point make this trail cam a must-have. Amazon

With one of the lowest price points of any cellular camera on the market, it would be tempting to classify this as an entry-level cam, and it certainly fits that niche nicely. But the Spypoint Link-Micro-S also breaks some new ground, with a rechargeable battery pack that should result in big savings on battery purchases, and the solar panel is designed to assist the battery pack in powering the camera. Finally, Spypoint’s data/picture management plan is very affordable and offers additional benefits that makes it as attractive as any of the competition.

Perhaps the biggest standout feature on this camera was the rechargeable battery pack which, if it proves effective and durable, would save users a ton of money on expensive lithium batteries. And the solar-assist charging panel will only help in money savings and efficiency. The Spypoint Link-Micro-S is a relatively easy camera to set up and run, and the small physical size makes it perfect for areas where deer act hinky around cameras, or there are only small trees (or fence posts) for setting up.

I charged the battery pack supplied with the unit, then followed manufacturer instructions for setting up the camera. Then I evaluated the unit for adequate instructions and simplicity of setup, a significant issue for cell-cam rookies and experienced users alike. When pics were delivered to my app, I noted the time lapse between the photo event and when the image appeared on my phone.

After the camera was up and running, I left it on an active food plot for 24 hours and evaluated photo quality of the pics it took of deer and other wildlife. When pics were delivered to my app, I noted the time lapse between the photo event and when the image appeared on my phone. Then I brought the camera home, mounted it to a tree in my yard and ran some standard tests for photograph and video quality at day and night. I also tested detection/flash range by walking past the camera at pre-measured distances.

The Spypoint link-micro is one of the easiest trail cams to set up I’ve ever used. Simply charge the battery pack—which charges with a USB charger—for about 10 hours, slap the pack into the camera, and you’re up and running. When you turn the camera on the unit immediately starts searching for a wireless signal. Since I live in an area with spotty reception this took a couple of tries (if the cam doesn’t find a solid signal, you shut it down and start again), but it wasn’t a big deal.

At 80 feet, according to my tests, the daytime detection was very good, and similar distances with nighttime runs. Since this is a low-glow (red) IR flash, pic quality wasn’t great at longer distances. That is typical for low, or no-glow cams.

Like most wireless cams, the Spypoint Link-Micro-S had a fairly lethargic (0.4-second) trigger, making it best for setups that make deer pauses, such as licks, bait piles, and mock scrapes. If you’re setting up on trails or rut funnels, the pics will likely be blurry.

The photos this cellular trail camera took quality ranged from decent to very good—but there were a few exceptions. The vast majority of day-time pics were fine, but some were a little grainy. Nighttime pics were good, provided the deer (or me) was not too close or too far. At the end of the detection range, the images were a little blurry. And close shots sometimes showed some glare, which is actually unusual for a camera with an IR flash.

Two photographs is the limit on burst mode, which is 30 percent less than the standard three-shot option. I typically set all my deer cams on three-shot, so this was a bit of a disappointment. But, hey, maybe I’ve been wasting a shot all this time and I just didn’t know it.

There are no video or time-lapse options on this camera. Since I don’t typically use wireless cams for this purpose, this wasn’t a huge mark against the camera for me. But for users who expect more from their camera, this will be a disappointment.

What The Spypoint Link Micro-S Does Best

For the trail-cam user who is just dipping their toe into the wireless world, the Spypoint Link-Micro-S is the best trail camera for the money. The original purchase is about 50 percent less than most of the competition. And the rechargeable battery (with solar assist panel), promises even more thrift when it comes to buying batteries, which can add up in a hurry. The Link-Micro-S is also easy to set up and is physically small (3 ½ x 6 ½ inches), which makes attaching it to smaller trees or fence posts much easier. Finally, Spypoint offers 100 pics per month for free, and the price to join the company’s “Insider Club” are not only insanely reasonable ($8 per month for unlimited pics), but qualify members for other benefits and giveaways.

What This Trail Camera Does Worst

Intermediate and advanced camera users will have to lower their expectations when using the Spypoint Link-Micro-S. Because video and time lapse options aren’t on the menu with this unit. Picture quality is solid but not exceptional. And while the rechargeable battery is an awesome idea that really excites me, I haven’t tested it for long-term performance. Finally, and this is really nit-picking, the camera uses a micro-SD card, and I dislike these with a passion. I have fairly clumsy fingers, and these cards are not only tiny, but require an adapter (one more thing for me to lose!) to plug into a computer and read.

Does the Spypoint Link-Micro-S LTE Deliver on its Mission?

There’s a lot to like here, especially for someone new to the cellular camera market. The Spypoint Link-Micro-S comes in at an attractive price point, and the setup is easy to follow, both huge assets for a newbie. The camera is also small and easy to install on a tree or fencepost. If the rechargeable battery and solar panel assist prove to have solid longevity, this will be a game-changing power source over standard lithium (and certainly alkaline) batteries, which can get expensive in a hurry, especially in colder climes. While the Link-Micro-S doesn’t allow for video or time-lapse functions, let’s face it; for a camera that retails for significantly less than most of the competition, I don’t consider this much to give up. Finally, Spypoint’s subscription program is amazingly reasonable and that only results in more added-value to a camera that is among the most affordable out there.