The TenPoint Titan M1 hunting crossbow is a jack of all trades, blending speed, power, and accuracy in a compact design 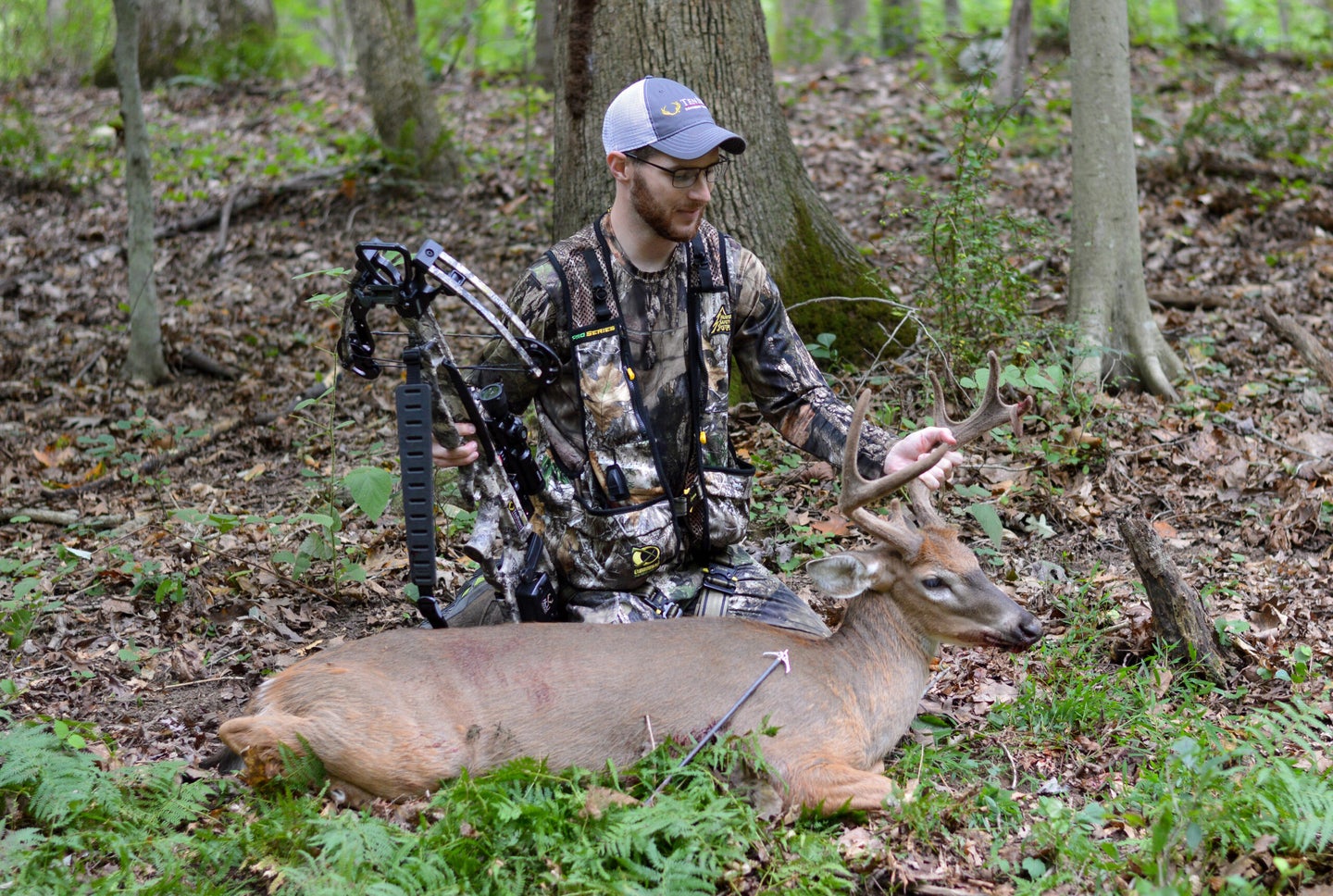 The author used a Titan M1 to kill three Maryland whitetails on opening day in 2019, including his first velvet buck. Taylor Pardue
SHARE

TenPoint has taken its incredibly popular Titan hunting crossbow and made it even better with the Tenpoint Titan M1 hunting crossbow. More than nine inches narrower and 30 feet per second faster than its predecessor, the Titan M1 also sports premium features that crossbow hunters would typically only find on models costing far more than this “budget crossbow.” Add it all up, and this latest iteration of the Titan is sure to become a legend in its own right.

What Kind of Crossbow Is the TenPoint Titan M1?

The TenPoint Titan M1 crossbow could best be defined as a jack of all trades and master of none. Granted, this fast, powerful, and compact crossbow isn’t as fast, powerful, or compact as some of the flagship models on the market today, but it definitely offers a great bang for the buck.

Like other TenPoint crossbows, the Titan M1 is built in the U.S. to an incredibly high safety standard. A dry-fire inhibitor, safety wings, trigger safety, and more allow hunters to confidently carry and operate the crossbow in even the most trying conditions. An included TenPoint 3X Pro-View 3 Scope, 3-Arrow Instant Detach Quiver, and ACUdraw cocking device (or Rope Sled) further justify its sub-$1,000 asking price.

And take a moment to appreciate that it does cost less than $1,000. At a time when many crossbows are commanding two or three times that amount, it’s refreshing to find a model that has top-tier qualities without the accompanying cost. Put it all together, and the Titan M1 is a terrific crossbow for the money—and one that will provide years of reliable service in the whitetail woods. Whether it’s your first crossbow or your latest, the Titan M1 is definitely worth your consideration.

How We Tested the TenPoint Titan M1

I shot my TenPoint Titan M1 through a chronograph using the 20-inch Pro Elite 400 carbon arrows and 100-grain field tips that come standard with the crossbow. My digital arrow weight scale put the total arrow weight at 448.5 grains. My trigger pull scale gave a reading of just a hair under 5 pounds.

After obtaining those initial measurements, I placed a Block foam target in an open field and then stepped back 20, 30, and 40 yards. I used a Primos Trigger Stick Gen 3 tall tripod to steady the Titan M1.

How the TenPoint Titan M1 Performed

My testing resulted in an average arrow speed of 332 feet per second. That isn’t as fast as TenPoint’s maximum advertised speed of 370 when using its 370-grain Pro Light carbon arrows, but given my arrow weight, it still produces a kinetic energy of 110 foot-pounds—more than enough to kill a whitetail. I’ve hunted for years with compound bows shooting roughly 280 feet per second, so I’m still shooting considerably faster than that.

I shot a few arrows at each distance and had no problem hitting the white dots on the black target’s sides. The Pro-View 3 that TenPoint includes with the Titan M1 is perfectly suitable for hunting and shooting thanks to its multiple reticle aiming points and five red and five green illumination settings. However, the scope is calibrated for a fixed 350 feet per second. I swapped the Pro-View 3 out for a Hawke XB1 scope with speed calibration so I could adjust for my model’s speed. Doing so made hitting targets—and deer—even easier.

My Titan M1 features the ACUdraw cocking device, so cocking the crossbow’s 180-pound limbs is as simple as cranking the handle that comes stored in its stock. I have used a cocking rope a few times, however, which is also easy to do. Simply put, this compound crossbow is as smooth as they come.

The Titan M1 is reasonably quiet even with the speed and power it generates. If you feel the need to quieten it even further, consider adding a String Dampening System from TenPoint. The system features mini dampening rods to reduce string oscillation and noise at the shot and mounts in the crossbow’s cable slot.

The Titan M1 weighs less than 7 pounds, measures just 9 inches wide when cocked, and is only 32.5 inches in length, making it light enough and maneuverable enough to hunt with in a treestand. I hunt out of a climbing stand with no shooting rail for maximum mobility, but I could see this crossbow being useful even in a box stand with relatively narrow shooting windows.

The Titan M1 comes clad in TrueTimber Viper camouflage. It’s a little lighter of a pattern than I’m used to, but it does remarkably well even in my Eastern hardwood hunting environment. The coating also seems to be very durable, resisting scratches from my typically less-than-careful treatment of my hunting gear.

What the TenPoint Titan M1 Does Best

I could tell you more about how this crossbow’s specs make it a great all-around choice for hunters, but the ultimate test of a hunting tool is how it performs in the field. To that end, I can honestly say that the TenPoint Titan M1 is a deer-slayer, because I hunted with one in 2019 to great effect. I was in Maryland for the season opener, hunting in the suburbs of Baltimore. Deer are so overpopulated there that they are literally eating themselves out of house and home—the forest floor is browsed to a downright ridiculous degree. So, I went to work thinning the herd.

I started the day off by shooting my first velvet buck almost lengthwise. The shot angle I was presented with required me to hit just forward of the left hip and exit near the right shoulder. The Titan M1 provided the arrow with plenty of energy for a complete pass-through and dropped the buck within 50 yards. I came back that evening and killed two does within 30 minutes of each other, both shots broadside at about 32 yards. These deer dropped as easily as the buck had that morning.

What the TenPoint Titan M1 Does Worst

I wish the Titan M1’s foot stirrup was a bit wider so I could actually fit my foot through it. As it is, I have to be careful that the tip of my hunting boot is securely in the stirrup when cocking the crossbow. A larger stirrup would add some weight and make for a larger profile, though, which would hinder the Titan M1’s maneuverability. TenPoint no doubt made that same assessment when designing it.

The quiver mounting bracket could also be a bit longer, as it puts the front of the quiver ahead of the stirrup when the quiver is mounted parallel to the crossbow’s stock. I sidestepped that problem by mounting the quiver perpendicular to the stock. Still, it would be nice to have the side-mounting option.

If these critiques sound like I’m nitpicking, that’s because I am. I’ve been very pleased with my Titan M1’s performance. The crossbow could be faster and narrow, of course—but it could also be more expensive. There are always tradeoffs when it comes to selecting a crossbow, but the Titan M1 is a great blend of premium features at a reasonable price.

Does This Crossbow Deliver on its Mission?

Yes. Take the money you could have spent on a more expensive bow and put it toward your next dream hunt instead. The Titan M1 is up for any challenge.