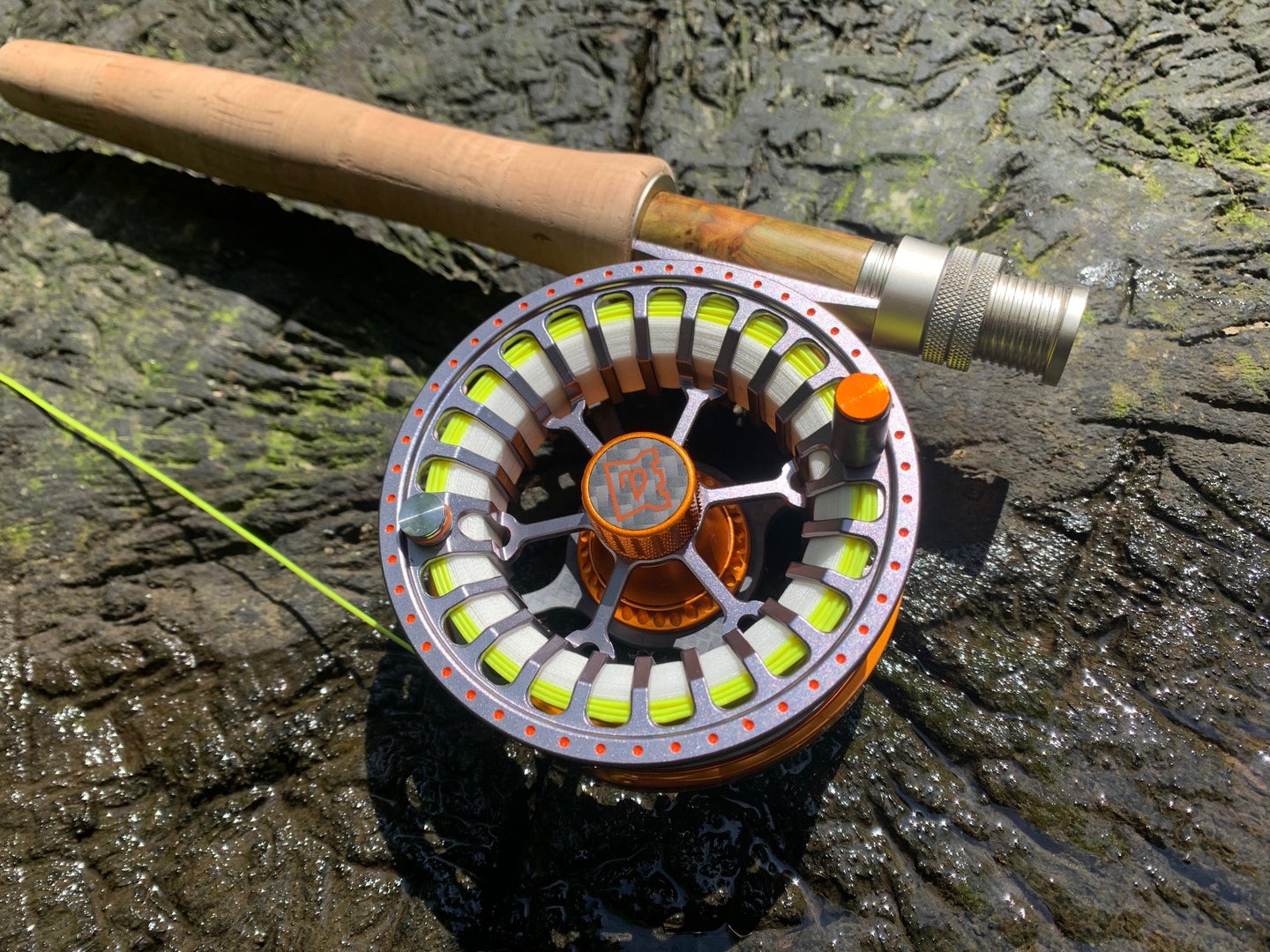 When it comes to my own fly-fishing gear, I can have a hard time getting excited about reels. I’m constantly amazed by the advances in fly-rod technology. Same goes for the imagination and ingenuity behind the latest fly patterns. Hell, I’ll even geek out over fishing waders and fly vests. But for 94.7 percent of the fly fishing I do—confined to small trout streams and bass and bluegill ponds—the only purpose I honestly need a fly reel to serve is as a glorified line holder. (To give you an idea, I’ve been fastening the same Bauer reel to various 5-weights of mine for 20 years now.)

Then I got my hands on a Hardy Ultralight MTX-S fly reel, and I must say: This reel makes a great first impression. The reel is remarkably light, yet it leaves you with no doubt about its ability to take a beating. This reel feels strong. And then there’s its visual impression—a charcoal-gray spool secured inside a shiny orange frame. This reel looks sharp.

A friend of mine also has an Ultralight MTX-S fly reel, and I remember calling him when I got mine. I told him how much the reel’s build and design impressed me. “And it just looks amazing,” I added.

“It looks even better when you get it on a rod,” he said.

I hit my favorite trout stream a few days later to find out for myself.

What Kind of Reel is the Ultralite MTX-S Fly Reel?

Well, for starters, the Hardy Ultralite MTX-S is an expensive fly reel. There are decent fly-rod-and-reel combo kits out there that cost less than the price of this piece of fly-fishing equipment. This reel is designed for serious fly bums with deep pockets—anglers who want the best and are willing to pay for it.

With that out of the way, I can add that the Hardy Ultralite MTX-S is also a remarkable reel. I love this thing. I’ll get into the specifics shortly. First, let’s talk about the build of this reel.

When I think of Hardy fly reels, I picture quintessentially classic designs—the kind of reel I imagine Izaak Walton would’ve used. The MTX-S fly reel (and its predecessor, the MTX) is not that kind of reel. This is a thoroughly modern piece of gear—both in form and function. The MTX-S features a hybrid construction: The spool is aluminum, and the frame is carbon fiber. The result is a fly reel that’s crazy light, yet super strong.

How We Tested the Ultralite MTX-S

I’ve been fishing with the Hardy Ultralite MTX-S fly reel all spring and summer on my favorite New York trout stream, which shall remain nameless. During those outings, I really came to appreciate the ultra-lightness of the Ultralight (more on that below), and the reel’s large-arbor design. The spool on this reel inhales line.

Even though I caught plenty of trout on the [NAME REDACTED] River, none was quite big enough to give the drag system on the MTX-S an honest run through the ringer. For that part of the test, I’d have to fish little dirty.

I’m by no means “above” trout parks. In fact, cut my teeth as a teenage wannabe trout bum fishing the trout parks in my home state of Missouri. I might, however, be above the kind of trout park were teenage kids who work at the nearby hatchery will walk right past you, dumping net after net of 15- to 20-inch trout into the very water you’re presently fishing. Pardon the cliché, but fishing at this park truly was like shooting fish in a barrel.

But, I knew what I was getting into—and I couldn’t have asked for a better spot to test fly gear. During the four-hour time slot I booked at the park, I probably landed 25 fish, a few of which were true toads. And when I had those bigger fish on the line, all it took to bring them to an efficient halt was a few click on reel’s drag knob. Mission accomplished.

What the Hardy Ultralite MTX-S Fly Reel Does Best

The two qualities of the Ultralite MTX-S fly reel that impressed me the most were its weight and the drag system. This is the lightest fly-fishing reel I’ve ever used on a 5-weight rod. I don’t live close to trout water (that secret stream is an hour’s drive away for me), so on the days when I do fish, I tend to stay awhile.

I never fully appreciated the advantage of using an ultralight fly reel till I tested the MTX-S. Even on days when I pounded the stream for seven or eight hours, my 5-weight rig never felt heavy my casting arm never tired.

And the drag system deserves praise. Granted, I’m aware that stocked trout (even really big ones) are no match for wild fish—but many of the hatchery-raised fish I landed were strong. They put deep bends in a fast-action rod and had to be fought carefully before they came to the net. Fortunately for me, the drag on the Ultralite MTX-S could stop the fish on a dime.

Where this drag system would really come to a fly angler’s advantage, though, is in the 7/8/9 model of the Ultralite MTX-S. A reel that’s this much of a tank would be perfect for fighting bigger species like smallmouth bass, steelhead, and northern pike. And, again, because the drag system the Ultralite MTX-S is sealed, you could used this reel for targeting saltwater game fish, such as bonefish, permit, or baby tarpon.

We’ve covered this already, but I’ll mention it again: The Ultralite MTX-S is expensive. If you’re in the market for a fly reel to stick onto a 3- to 6-weight fly rod, you can certainly find reels that cost less. That said, if you’ve made it this far in the review, I’m guessing it’s for one of two reasons:

And, while I love the color scheme on this reel, I can see how it might not be everyone’s cup of tea. OK, one more gripe: A reel like this should come with a lifetime warranty; not just five years.

Does the Hardy Ultralite MTX-S Deliver on its Mission?

Hell yes. For hardcore fly anglers who want the best, the Ultralite MTX-S fly reel deserves your consideration. This is one of the best and most complete fly reels I’ve ever used: It is light and strong. It picks up fly line in a flash. It has a smooth, powerful, and fish-stopping drag system. And if you like the way this reel looks right out of the box, just wait till you get it on a fly rod.