We tested the Super X4 on a duck hunt—but if you're looking for one shotgun that can do it all, this might be the gun for you 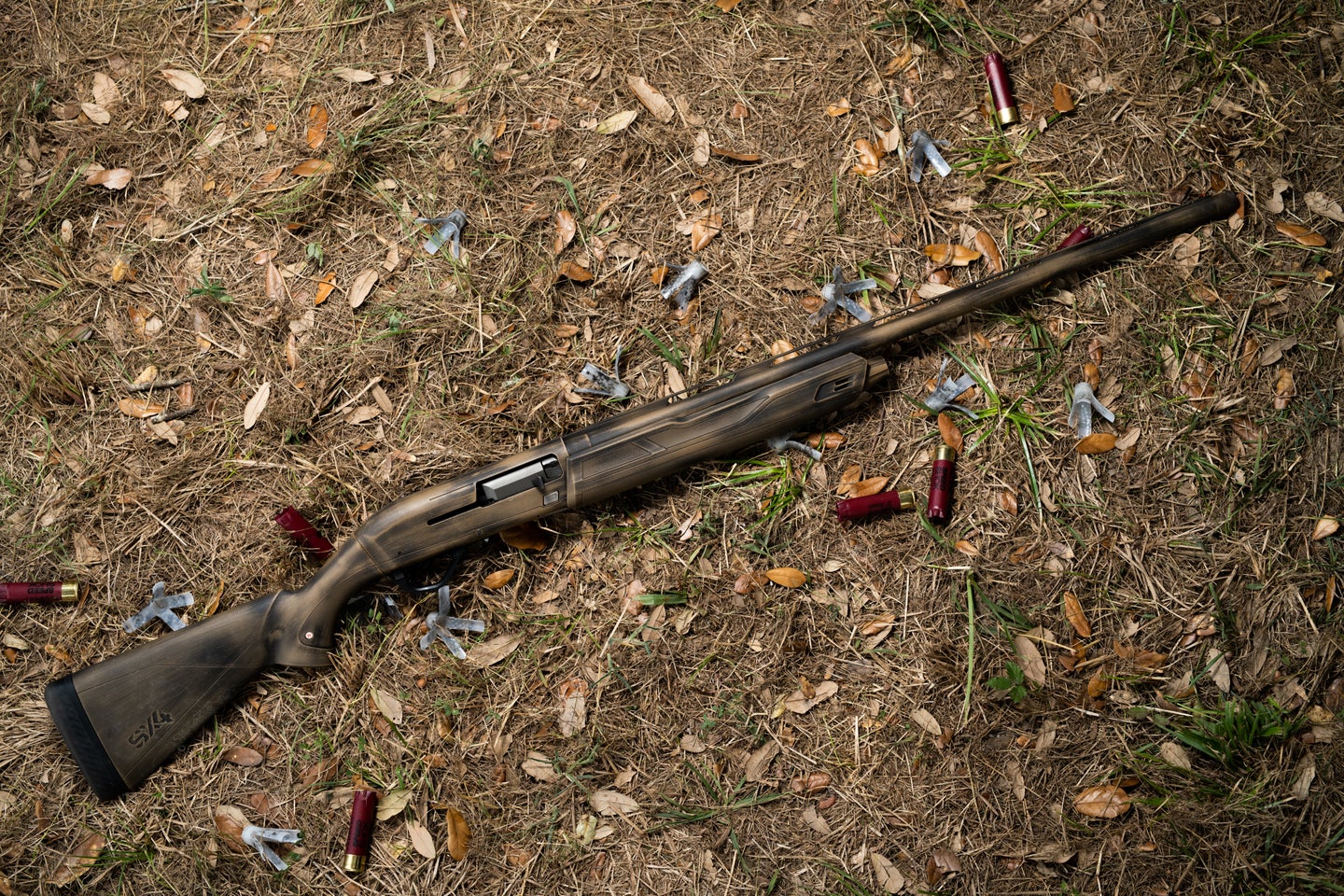 The Winchester Super X4 shotgun won the “Great Buy” category of our waterfowl gun test. Not everyone wants to spend nearly $2,000 on a waterfowl semiauto. The X4 proved to our test team that you don’t have to. True, there are less expensive guns on the market, but for under $1,000 the Super X4 offers outsized performance, handling, and shootability far above its price point.

The Winchester Super X4 is the latest gun in a line that began with the Browning Gold and morphed into the Winchester Super X2, Browning Silver, Super X3, and now, the Super X4. All the guns are built around a gas system that works reliably, reduces recoil effectively, runs for many rounds without cleaning, and is easy to maintain when you do have to clean it.

The Super X4 replaced the X3 in 2019, retaining the light weight and trim lines of the X3 while adding englarged bolt handle, safety, trigger guard, and bolt release to make it easier to use in bad weather and also lowering the price. Currently, the X4 comes in both 3-inch and 3 ½-inch 12-gauge versions as well as a 20 gauge. There are 12- and 20-gauge Compact versions with shorter stocks for smaller shooters and, new for 2022, Winchester added true left-hand 12-gauge models as well, so there is a Super X4 to suit almost anyone. A Super X4 is light enough to take into the turkey woods or the uplands, and its gas system reduces recoil so it’s still a comfortable gun to use for waterfowl or even clay target shooting. The Super X4 stood out among the guns at our test at Pintail Hunting Club for its versatility and value.

The Super X4—Inside and Out

Outdoor Life Senior Editor, Joe Genzel, brought his personal SX4 for us to shoot. The gun came with Genzel’s seal of approval—no small thing considering how serious he is about duck hunting—and a custom Cerakote job, which explains why it doesn’t look like the X4s Winchester offers.

The X4 costs $200 less than the X3, and you see the difference in the quality of the gun’s appearance. It looks and feels cheaper than its predecessor, but it works just as well. At the heart of the gun is a simple, proven gas-system built around what Winchester calls the “Active Valve” that meters the expanding gases entering the action, assuring the bolt speed remains constant no matter how heavy or light a load you’re shooting. Beyond that, there’s a composite buffer sleeve and a spring around the magazine tube so taking the gun down and maintaining it is a snap.

The barrel shares the same overbored dimensions—about .742 instead of the standard .729 for 12 gauges—and features the longer Invector Plus choke system, which combine to improve patterns. The  X4 also has a ¼-inch wide ventilated rib barrel and red fiberoptic bead. At the other end of the gun, you find Browing/Winchester’s excellent Inflex recoil pad, which is designed to combat cheek slap by directing the gun downward. I can’t say whether that’s the case, but I do know it’s an effective pad. There are also removable spacers on the butt, so you can adjust length of pull with going to a gunsmith. The grip and forearm have been thinned down, too, making this a gun a good choice for shooters with small hands.

The Winchester X4 also has the enlarged bolt handle and bolt release button that hunters and target shooters seem to prefer. I like these because they are larger—but not too big—and because unlike some bolt releases, the X4 button is big enough to make it easier to use, but not so big that it’s easy to press inadvertently. The safety is big, square, and now made out of plastic—one of the cost-saving measures Winchester used to lower the X4’s price. But it’s large enough that it’s hard to miss—even when birds take you by surprise—and it’s easy to reverse for left-handed use. The trigger broke at 5.9 pounds, putting it in the mainstream of shotgun trigger pull weights.

How We Tested the Super X4

The 30,000 acres of the Pintail Hunting Club attract a staggering number of bluewing teal in September, and morning teal hunts were an important part of the test. The four of us all shot the gun well. My turn with the X4 came on day two, and I shot a limit of six teal with seven shells, which I had never done before and may never do again. And, it was the only time I’ve ever hunted with an X4. Coincidence? Maybe, maybe not.

The X4’s soft recoil and good balance made it an easy gun to hit with on clays, too, and it cycled all the 1-ounce target loads we fed it, along with 1 ¼-ounce HeviHammer and steel hunting loads. At the pattern board, the Super X4 performed exceptionally well, delivering 35-yard patterns from the factory Modified that actually outdid the aftermarket tube Genzel ordinarily uses. And, the gun shot straight: the pattern printed 60 percent above the point of aim and 40 percent below, which is about ideal.

With its slim profile and fairly light weight combined with soft recoil, the X4 proved to be a very shootable gun for everyone on the test team. Although 24- and 26-inch (24-inch is available in 20 gauge only) barreled versions are available, I felt like the 28-inch barrel gave the gun some forward weight that helped it swing and point well. As I mentioned, it has enlarged controls that make it an easy gun to load and unload, even in the cold, although the recoil spring is stout enough that it took a good yank to open the bolt.

The Winchester X4 sells for less than the X3 did, and the only way to lower the price of a gun is take some of the value out of it. Rather than skimp on the gun’s internals and its performance, Winchester cut costs by using plastic parts where possible (trigger guard, safety) and made a somewhat cheaper looking gun—to my eye, anyway. It also has more modern lines that don’t appeal to my traditionalist sensibilities. As long as I’m piling on the gun’s appearance, I never liked the white plastic inset with a red “W” in the stock either. All that said, a lot of waterfowlers don’t care as much about what their gun looks like as they care about how well it works.

If you wanted to own one gun for all your hunting and shooting, you could do much worse than the Super X4. With trim lines and relatively light weight, it’s a gun you could carry in the uplands in the afternoon following a morning duck hunt. Likewise, it’s a gun you can sling over your shoulder for a long walk in the turkey woods, and, while the standard SX4 isn’t drilled and tapped, the Universal Hunter models are. Any of the X4s kick softly enough for you to spend a day at the gun club without feeling beaten up when it’s over.

Given that we awarded the SX4 our Great Buy award, it stands to reason that we think it’s a good buy. And it is. The 3-inch gun lists for about half the price of a top-of-the-line semiauto, but the SX4 delivers great, reliable performance that rivals any high-end semi. There aren’t a lot of guns at this price point, and all of them are good values: the Beretta A300 Outlander, the Franchi Affinity or the Remington V3 (which I hope will be back in production soon). The test team picked the X4 over the A300 because of the Winchester’s slimmer lines. It beat the Franchi because gas guns recoil less than inertia models like the Affinity, which I think makes the gun a more versatile choice because it’s more enjoyable to take to the gun club for clays.

What the Super X4 Does Best

What the X4 does best is simple: It delivers good patterns on target reliably and with minimal recoil at a great price. What else do you want a shotgun to do? Also, the X4 has trim lines that make it suitable for hunters of varying sizes, and the stock adjusts easily for length, too.

In my view, the SX4 falls down aesthetically, even compared to other plastic-stocked guns. It has a cheaper feel in hand, too, with its plastic parts. That said, Genzel’s gun, with a custom distressed Cerakote finish, looks kind of sharp, so it is possible to dress this gun up. Still, if you want a good-looking gun, buy something else. If you want a durable gun that works, that’s the Super X4.

The Winchester Super X4 checks all the boxes and for a very good price. It’s reliable. It’s soft-shooting. It’s versatile enough to shoot at waterfowl, turkeys, birds and targets. It handles a wide variety of loads and shoots good patterns. It handles well. I don’t like its looks, but I am picky that way. A lot of people aren’t, or they even like its sleek, modern lines. And even I can recognize that looks aren’t the most important feature of a waterfowl gun—which is why I joined the rest of the test team in enthusiastically giving the Super X4 our value award.