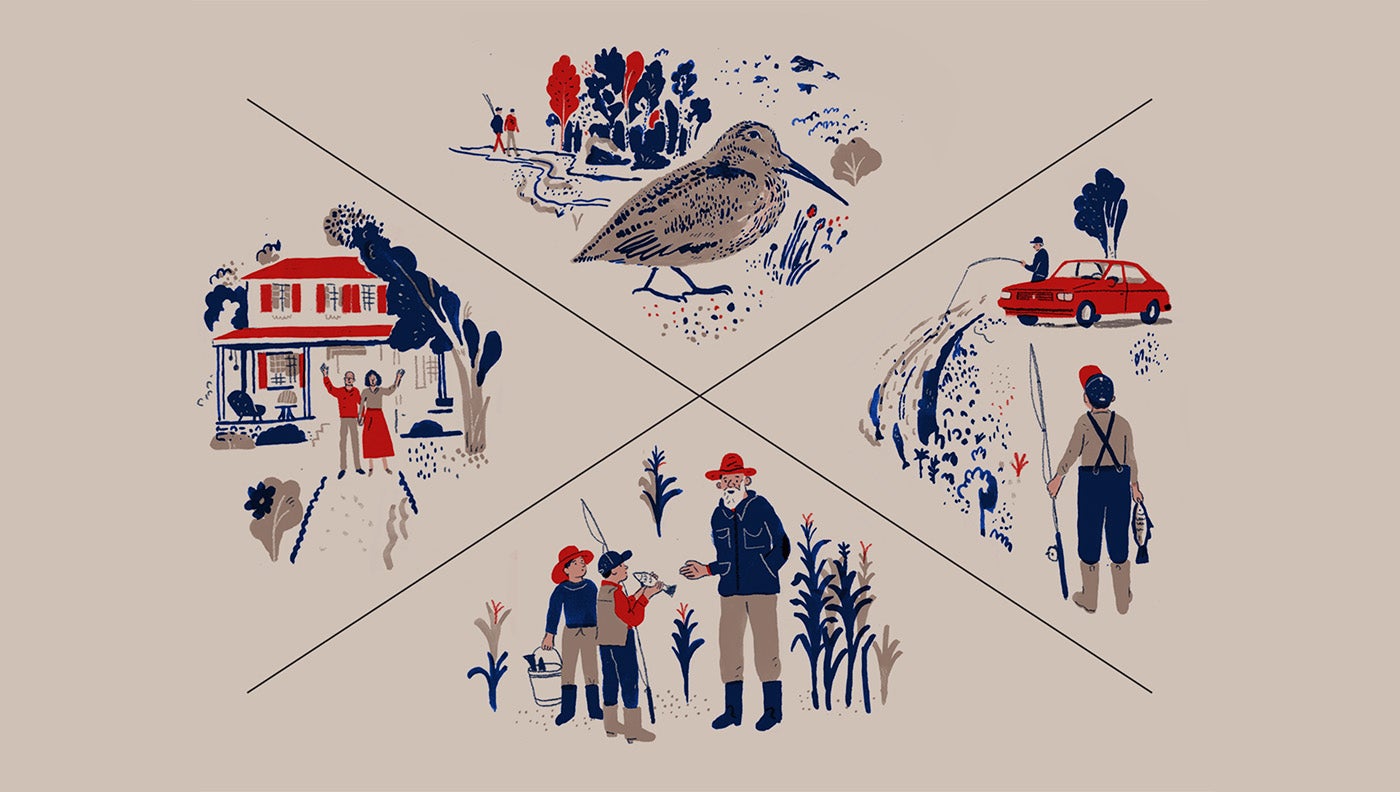 The Back Way Home Is a Trip Down Memory Lane

THE DRIVE to my folks’ house is about three hours if you stay on the blacktop and about 10 minutes longer if you go the back way. So it’s not a shortcut, really. But I always go the back way, because it seems like I get home sooner. The turn off the blacktop is so subtle I used to drive right past, but now when I see the barn with the caved-in roof and the aspens growing up around it, I know to slow down and turn left onto washboard gravel of McCabe Road. It’s up and over a rise, and as soon as the alder swamp comes into view, I can just about see the woodcock that had seemed to show up overnight.

My buddy Jo, who lived just down the road at the time, had been up at dawn and spotted the dark forms twittering over the tops of the alders and floating down into the boggy slash in the gloaming. When we walked into the cover, woodcock flushed everywhere—pudgy little aliens lumbering up through the branches. They hung in the sky like helicopters. We’d never seen a true flight of woodcock before, with the alders suddenly buzzing with birds. It was as if a new window had opened onto a world we thought we knew every inch of. Neither Jo nor I could hit one to save our lives, but we missed for the best of reasons: We were too awed by it to do anything else.

I take a right onto Bills Road, where a trickling current funnels into one end of a culvert and pours out the other, forming a wide pool. I still half expect to see my grandfather’s car there. The thought makes me laugh but brings a tinge of regret too.

Grandpa had eased his red Dodge Omni to a stop and thrown it in park. He was a big believer in the idea that old age entitled him to do whatever he wanted, and when his legs would no longer carry him along the stream-side trails, he’d taken to parking his car right in the road over the culvert and fishing from the passenger’s seat.

As he laid out a cast, I scrambled downstream, caught a pile of fish, and kept two small brook trout for eating. When I came back, Grandpa inspected my fish. “That’s it, huh?” he said. “Yup,” I lied, and he held up three bigger brookies skewered on an alder branch. “What do you think of those?” The look on his face said, The old man’s still got it, but his hands were shaking with cold, and I felt bad about having left him. Heading home, I promised that we’d come back, but we never did. On the day Grandpa died, he said, “C’mon, David, we’re going fishing,” but he only made it as far as the bathroom.

Turning right onto Sperry Road, I can’t help but think of Clem, or “Good Old Clem,” as we came to call him.

My brother Greg and I were walking home from fishing when we looked up, and out of nowhere, there stood Clem Kadiddlehopper. No one knew Clem’s real name, only that he roamed the back roads by day and, we imagined, descended on the town by night to snatch people’s pets, or  you if you weren’t careful.

Now he loomed right in front us. For as far as we could see, there were only the long line of blacktop and endless rows of standing corn on either side. We were as good as dead, I figured. But then Greg, always the bravest, reached into his creel, produced a few discolored brook trout, and held them out to Clem, whose mouth, which had formed a tightly pursed circle, broadened into a gaping smile. He took the fish and gave us each a pat on the shoulder and an awkward sort of half hug.

It was a relief and a revelation all at once. Clem was not a boogeyman. He was a friendly old guy who for reasons we didn’t understand lived in the woods. And though it was never a real possibility, the fact that he didn’t leave us for dead on a road between two cornfields seemed super nice of him at the time. From that day on, we called him “Good Old Clem.”

From there it’s a straight shot to my folks’ town, and as I get closer, the memories come too fast to name, except one I always try to push away as I pass my grandparents’ house.

I’d busted a window with a baseball, and Dad cut himself fixing it. I was in my room sulking when I heard him yell in a way I’d never heard before. I went outside and saw blood on the sidewalk and then followed the dark-red splotches across the road and up the steps into my grandparents’ house. When I opened the door, I saw my grandmother, a nurse, leaning over my dad, who was lying motionless on the floor, passed out.

Thinking the worst, I took off running until I reached the woods, where I cried until I finally realized that I’d have to go back and find out if I really had killed my father. When I got there, Dad and Mom were on the porch with the front door swung open, Dad with bandages on his wrists, both of them waving me back to the place where I’m always welcome no matter what.

And that’s where they are now, as I pull in. They always see my car from the living room window, and by the time I turn into the driveway, they’re there, with the door swung open.