The Beginner’s Guide to Picking and Cooking With Ramps

For a brief window in the spring, the woods is full of wild, edible ramps. Here's how to find them 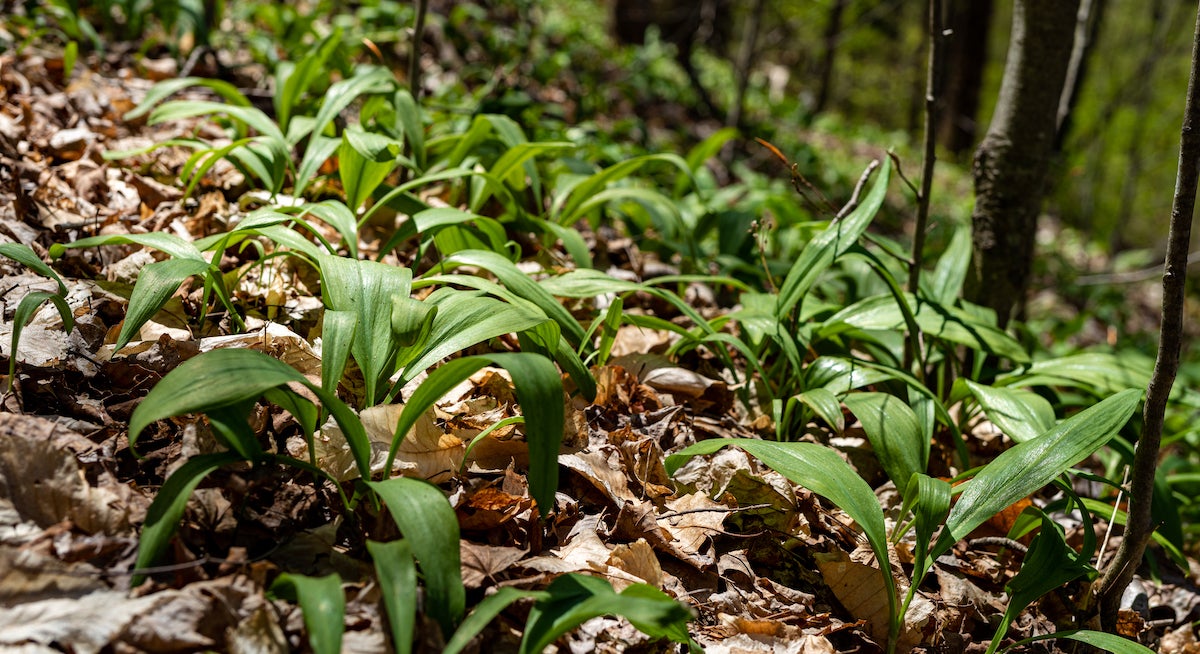 Ramps are only around for a few weeks in the spring. Cosmo Genova
SHARE

The arrival of spring means many things. Warm weather, turkey season, and trout fishing to name a few. But for a brief window, spring also means ramps are on the menu. Ramps are a garlicky, scallion-like edible plant. For roughly six to eight weeks, they can be found and enjoyed in the eastern United States and Canada.

People have been gathering and eating ramps for hundreds, if not thousands of years, but they’ve become extremely popular in the last decade. Trendy chefs, “foodies,” and social media influencers have exploded their popularity in recent years. Eaten raw, or incorporated into a favorite recipe, ramps are delicious, and hunting for them is an accessible way to get into foraging. But don’t wait too long, because they’ll be gone before you know it.

Ramps, also known as ramson, wild leek, or spring onion, are a species of wild onion. They have two long oval leaves that stick up from a submerged white bulb. While there are several varieties of ramps in the U.S., and a few related plants in other parts of the world, their appearance and flavor are mostly similar. Variation between the species typically expresses itself in minor differences in flavor, size, and hue. Some varieties are spicier than their relatives, or their leaves and bulbs might be a different size or thickness than others.

As with many wild foraged foods, there are a few poisonous look-alikes to ramps, but it’s generally not something you need to worry about. If you’re ever confused, the garlicky smell of ramps is a dead giveaway that you’ve found the right plant.

When are ramps in season?

Some of the hype around ramps comes from their short window of availability. Ramps come around for the first few weeks of spring in the eastern and central U.S. and Canada. Their season only lasts for roughly six to eight weeks, usually popping up in early to mid-April, and gone by about the first week of June.

The flavor of a ramp is best described as hot and garlicky, especially when eaten raw, with the leaves usually a bit milder than the bulbs. When cooked, the hotness and strong garlic-forward flavor of the ramp are subdued considerably. The raw bulbs have a high water content, giving them a nice crunchy snap that’s a bit crisper than a garlic clove or a scallion. The texture of ramp leaves can be best described as spinach meets grass—but in a good way.

How to cook with ramps

The culinary possibilities of ramps are endless. This versatile plant can be cooked whole or incorporated into other dishes. Pretty much anywhere you might use onion, garlic, shallot, or scallions, you can substitute or add in ramps.

Both the leaves and bulbs can be sliced and used as a garnish. I’ll often grill ramps whole and serve them alongside grilled meat or fish. You can also make fermented dishes like kimchi with whole ramps. The leaves can be used to make pestos, vinaigrettes, chimichurri, and other sauces and condiments. You can even use the leaves in the same ways you use other vegetables in recipes like Korean-style scallion pancakes, Japanese okonomiyaki, fried vegetable fritters, and things like that.

The bulbs are great when pickled whole or they can be used like pearl onions. Ramp butter is also an absolutely delicious way to use ramps, and can be eaten on everything from steak to pasta, or even just spread on toast. I like to cook ramps in biscuits, bread, and focaccia as well.

Where can you find ramps?

Ramps usually grow in patches of various sizes depending on the age, soil quality, and how undisturbed the patch is. It’s hard to pin down what exactly the perfect ramp habitat looks like, but some anecdotal knowledge can go a long way. I’ve most often found ramps on shaded hillsides adjacent to areas with a lot of natural drainages, which turn and almost till the soil.

These moist, rich soiled areas—as well as shaded areas near streams and rivers—seem to be the most consistent for finding ramps. Ramps prefer wooded areas over open, flat ground where the soil is dry and sandy or too compact. I usually stumble into ramp patches near the banks of trout streams and on hillsides where turkeys roost. The key to finding ramps is to simply cover as much ground as possible until you find them, then look for similar areas and features to help narrow your search for new patches.

If you can’t find ramps in the woods, you can often find them sold at farmers’ markets and even some grocery stores when in season. Some restaurants even serve locally harvested ramps on their menus. If you have friends with property, it’s worth asking permission to look for ramps. Many states prohibit foraging for wild plants in state parks and federally managed lands, so make sure you check the local regulations before going picking.

How do you harvest ramps sustainably?

A ramp patch is a perennial resource you can visit every year if managed sustainably. Ramps take years to reach maturity and a large patch can take decades to flourish. That’s why it’s important to practice sustainable harvests to ensure the health of the patch for years to come. In general, it’s best to either only pick the leaves, or to cut the bulb above the root, leaving enough of the plant for it to continue growing. If you have multiple large patches to harvest from, it’s alright to sparingly pick the whole plant in some cases as long as you make sure not to pick an area too thoroughly. Try to avoid picking the whole ramp from small offshoot patches adjacent to a large patch so that they can continue to propagate.