What do wild critters get up to when they think we're not watching? Some pretty crazy stuff, actually. See for yourself in these never-before-published trail-cam photos 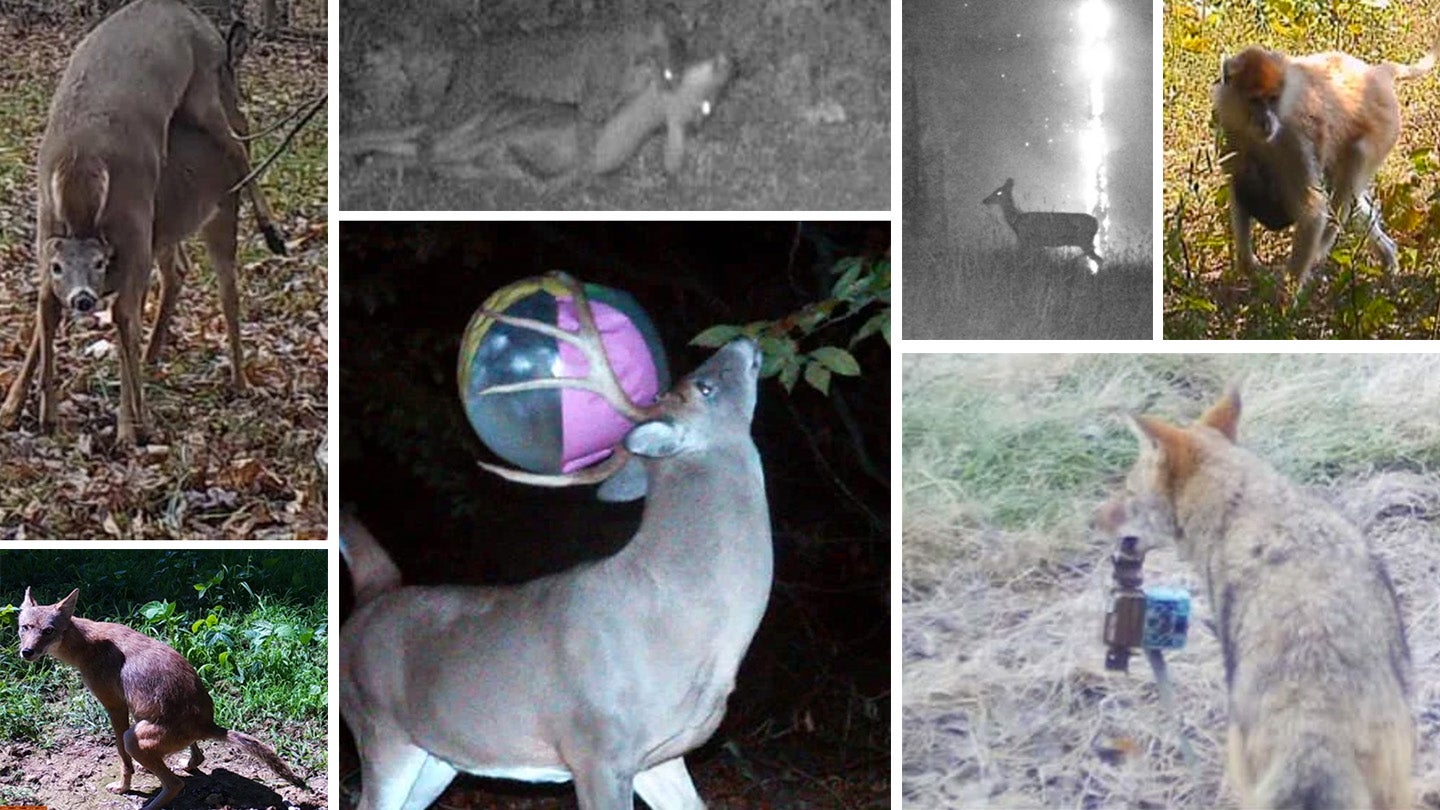 A selection of wild trail-cam photos, from a beach-ball buck to a cam-stealing coyote—and, well, a monkey.
SHARE

Before trail cameras, the day-to-day lives of wild critters were complete mysteries to most of us. But now, thanks to the latest technology, we can spy on game 24/7 to uncover secret animal behavior that was once totally hidden from us. Who knew, for example, that bucks spend so much of their time getting pumpkins, buckets, and other random objects stuck in their antlers?

What else to deer, turkeys, coyotes, cougars, and monkeys (yes, monkeys) get up to? See for yourself in this collection of crazy, never-before-published trail-cam photos.

This buck seems to be either working a licking branch or trying to get a better look a the thing stuck in his antlers—and thinking, What? A beach ball?! How did that get there?

Forest fires are a common hazard for western whitetails. This Idaho doe was captured on camera right on the edge of a large burn.

This doesn’t look like an actual flying squirrel, but if it ever wanted to be, it got its wish. The hawk was happy to oblige no doubt.

We know that cougars are capable of taking down adult big game, but it’s rarely captured on a trail camera. That’s a big-bodied deer too.

This coyote was hoping for a turkey dinner, but he couldn’t quite jump high enough. Impressive try, though.

Not sure what’s going on here, but we’ll keep it PG. Maybe they were just trying to get a new perspective on things.

This big cat was captured mid-sprint while trying run down a mule deer doe. We don’t know who won the race, but our money is on the one with the long tail.

There are two ways to look at this one. Either he turned around and was surprised to find a camera there. Or he knew all along and is thinking, Get a picture of this, as he takes a dump in your mineral lick.

Coyote predation on whitetail fawns was once thought to be insignificant, but the latest research shows otherwise. This is why the fawn drop is synchronized—so that a large number of newborn deer overwhelms predators’ ability to get too many of them, ensuring that some will to survive into adulthood.

Coyotes rarely prey on raccoons because the latter are generally too mean to mess with and often travel in packs. This one, clearly, was an exception.

Too bad the camera wasn’t on video mode so we could find out who blinked first in this standoff between a lone coyote and a young whitetail buck.

This is most likely a cryptorchid buck, which is one that never shed its velvet (or antlers). This is a true rarity in the wild.

Maybe they think it’s a getaway vehicle. “Get in the truck, Stan. There’s someone watching us.”

Filtered sunlight paints a ghost’s face on the buck above. As for the image below, well-known whitetail hunter Dan Infalt says the camera was located behind the home of a family that went missing. Once he saw the photo, he had it analyzed by an expert who said the camera flash lit up some dust particles. But neither of them could deny the skull-shaped orbs. When you blow up the image, you can even see teeth. Pretty creepy.

Apparently, this Indiana buck had these pieces of plastic stuck to his head for a while, as hunter Taylor Early found them lying just a few yards from the deer’s antlers during shed season.

The Winter Olympics are about to kick off, of course, but we can’t help thinking of the summer games when looking at this photo. This bear must be working out for the pole-vaulting competition.

17. The Other, Other White Meat

Bobcats almost never take down full-grown whitetails, but they can kills fawns and even the occasional yearling, as seems to be the case in this photo.

The question is, did this hen just happen to be walking bye (Dude! Really?) or did this coyote really, really have to go?

This was taken in Tennessee. Your guess is as good as ours.

Maybe he wanted something to catch acorns in.

You don’t often see a whitetail doe with triplets. It’s even rarer to see one keep all three fawns alive for any length of time. But this one did.

Color-phase coyotes are also rare, especially one as blond as this.

Something is very wrong with this buck’s right antler. It must have been damaged during the growing process. I never saw the buck again after this photo.

This old doe has the biggest Roman nose I’ve ever seen. She’s been on my farm for nearly 10 seasons, and I hope she made it through the most recent one.

Hooves are flying. These two does are working out who is the real matriarch of the group.

This deer grew only half a rack. The other side remained a stub all season.

Every once in a while, your trail camera takes a pic that looks like something from a wildlife photographer. This is one of my favorite whitetail trail-camera photos of all time.

Most people know not to pee where they drink, but this doe didn’t get the memo. The heron probably isn’t thrilled either.