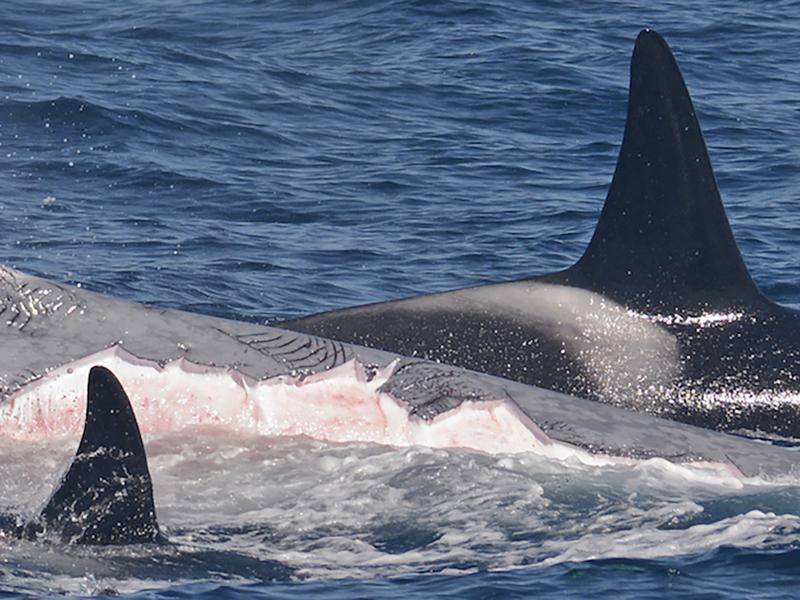 Orcas are called killer whales for a reason. They are the ocean’s apex predator, known to prey on a wide variety of formidable creatures, including great white sharks. Now, scientists have recorded orcas accomplishing an astonishing feat: hunting and killing the largest animal in the word, the blue whale.

In March of 2019, researchers at the Cetacean Research Centre in Western Australia were conducting annual surveys when they spotted orcas attacking an adult blue whale. The blue whale was between 60 and 70 feet long, while orcas top out at 30 feet. As the scientists recorded the scene, at least 12 orcas brutalized the blue whale, with female predators “leading the way.” A month later, the researchers witnessed another group of orcas kill a blue whale calf. A third incident, in which orcas killed a blue whale yearling, took place in March of 2021. The researchers detailed the three attacks in a paper published this week in Marine Mammal Science.

“This is the biggest predation event on this planet—the biggest apex predator taking down the biggest prey,” Robert Pitman, a marine ecologist at Oregon State University’s Marine Mammal Institute, told National Geographic. “We don’t have dinosaurs anymore, so for me as a whale biologist and a zoologist, it’s an amazing thing.”

Amazing—and brutal. During the first attack, the researchers observed teams of orcas tearing chunks of skin and blubber from the blue whale as well as biting off its dorsal fin. After hours of relentless assault, three killer whales lined up and rammed the blue whale onto its side while two orcas attacked its head. Meanwhile, a third orca swam inside the mouth of the blue whale and began eating its tongue, which is apparently a nutritionally dense organ.

Pitman says these coordinated attacks are perfected over many years. “Killer whale groups live for human life spans or longer, and so they hunt together cooperatively for decades and decades,” he said. “You can learn a lot about how to work together when you practice together as a team.”

In the course of six hours, more than 50 orcas arrived to feed on the blue whale carcass, according to the paper’s authors, as well as hundreds of seabirds, including at least one albatross. “We visited the kill site for six days after the attack, and for the first few days, there was a large slick on the surface where oil was emanating from the carcass on the seafloor,” the researchers wrote.

The paper is the first official documentation of orcas killing a blue whale, which can grow up to 100 feet long. While orcas have been observed chasing and attacking blue whales, a kill had never been recorded.