Personality-Based Storage Systems for Your Hunting and Fishing Gear 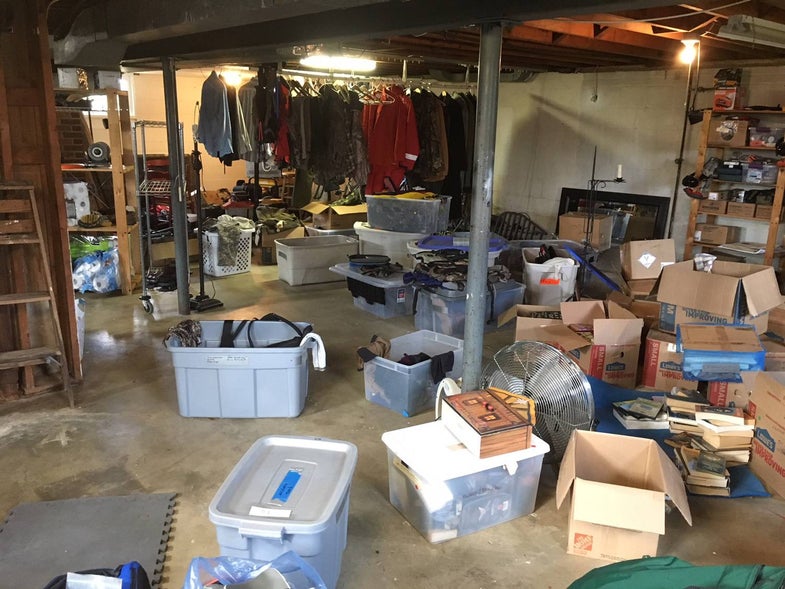 The Heavey basement, with its gravity-based organization system on full display. From the author
SHARE

I recently traveled to Palatine Lake, N.J., to do a story about bass pro Mike Iaconelli, who is a fanatical organizer of tackle. “It really helps with time management,” he told me, as he showed me around his custom-designed garage, which is more than 20 yards deep and has doors at each end so he can drive the boat in and out without changing direction. Along half of one wall were rod lockers.

“Most guys use rod holders,” he said. “But I’ve just got too many. Instead, I’ve got these open-face lockers. Sort them by length and action.” He had about 20 lockers and 200 rods. There were 3-foot-high stacks of Flambeau tackle boxes holding lures by type, size, and color. All were clearly labeled. Other boxes of hooks and weights. He had a line-spooling station, about a dozen big spools of line suspended horizontally. He likes to use fluorocarbon and braid. “Got these rigged up so I can spool up a rod while I’m still in the boat,” he said with the satisfaction of a man who is on top of things. There was a wall of peg hooks full of packets of plastics and Rapala crankbaits. Ike had more and better organized tackle than most big-box sporting-goods stores.

I made all the appropriately appreciative remarks—and I certainly envied the man his inventory—but there was a part of me that was secretly thinking, Dude, get a life. Who has the time to spend organizing stuff so that they can find it faster? This was defensive thinking, of course. Ike has a life. He has more than $2.5 million in tour winnings, many millions more in sponsorship and TV deals, and all kinds of side businesses. He lives in a huge custom-built house near where he grew up. He’s working with the National Geographic Channel on a show that would follow him fishing all over the world. He’s richer, more successful, and better known than I’ll ever be. But the guy is always on. While we were out on the lake behind his house, his phone chirped and he gave a 10-minute interview while pitching a weedy shoreline. He sounded like he is so used to doing these that he could be asleep and still do a credible job.

My life is slower and less dramatic, but it suits me. I have, for example, an organizing system that works better for my personality. It’s gravity-based. I take stuff into the basement and set it down someplace. If gravity keeps it down, I figure it’s in the right place. I try to keep the hunting and fishing stuff separate, but bleed-over is inevitable. I’ll be sitting in a treestand, notice a garlic-y smell, and discover that I’ve brought a 4-ounce bottle of Kick’n Bass scent instead of insect repellant. Or I’ll be out in a canoe and find that the only stink I have to put on a jig is doe-in-estrus scent. I can’t say I’ve found the latter to work as well on bass as it does on deer. Although, to tell the truth, I’m not sure I’ve ever really seen it work on deer.

If you’re too organized, you miss out on moments of serendipity because you already know where everything is. For the trip up to N.J., for example, I’d dusted off a set of Cabela’s Guidewear fishing parka and bibs that I hadn’t worn in ages. It’s got to be 20 years old, from a time when Velcro seemed like the answer to all of humanity’s problems. There must be 40 feet of ¾-inch-wide Velcro closures on the legs, cuffs, pockets, and zippers. Every time you open a pocket or need to pee, it sounds like you’re ripping apart an entire bedsheet.

I patted the pockets, as I always do when I put on clothes I haven’t worn in a while. I’ve been missing a spare set of car keys for a few years now, and I’m pretty sure they’re in a pocket somewhere. I didn’t find any keys, but in one of the chest pockets, I found an old Rocky Patel Torpedo. I gave up cigars years ago. But I figured this this was a grandfathered-in “gift” cigar. I wouldn’t be buying any new cigars, just finishing off the last of what I had on hand. Heck, it would be wasteful to just throw it out. It was completely dried out, of course, so I put it in a plastic bag with a moist paper towel. In about a week, it should be prime. Wow, I thought, this is great. I really miss cigars. I set it aside, went on my trip, and came home last night. The only problem now is that I have no idea where I put the cigar. I’ll bet it’s in the pocket of something.