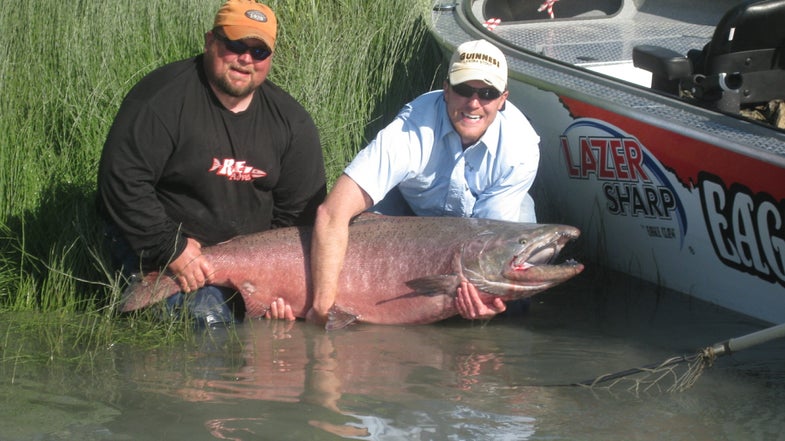 On July 17, Kansas angler Joe Atchison reeled in what may be a world-record king salmon. Though we'll never know for sure because this brute was released back into Alaska's Kenai River to fight another day. Atchison was guided to the beast by veteran salmon hunter John Whitlatch_,_ who estimates that the fish weighed between 85 and 92 pounds. That weight is based on a measurement of one of the more slender parts of the salmon's girth (it was kicking too much to get it around the thickest part), so 91 pounds is a bare minimum. Whitlatch claims this was a very fresh fish, about seven miles up the river from the salt and still heading higher to spawn, so by not killing it, there is no telling how much giant genetic material was left in the river. The world-record king weighed 97 pounds and was also taken in the Kenai back in 1985. Visit out Field Notes blog for more coverage, and keep clicking to see more shots of this monster salmon.__. John Whitlatch
SHARE
Freshwater Fishing
Salmon & Steelhead Fishing
news