Hardly anyone believes me when I tell them… The Colorado Division of Wildlife stocks native cutthroat trout in high altitude... 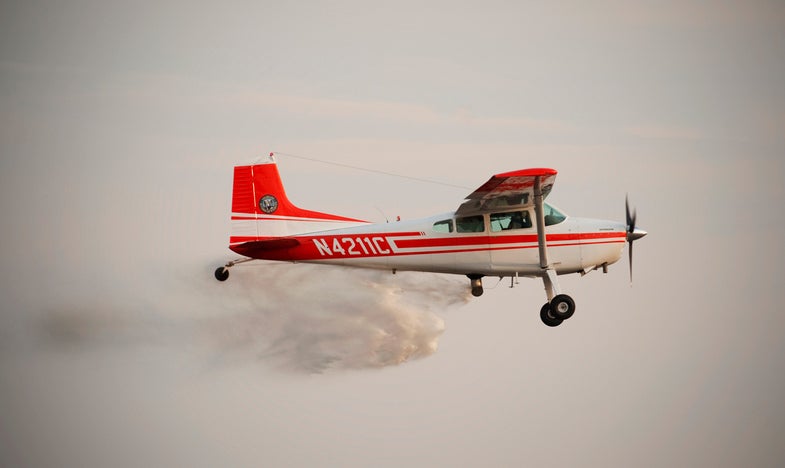 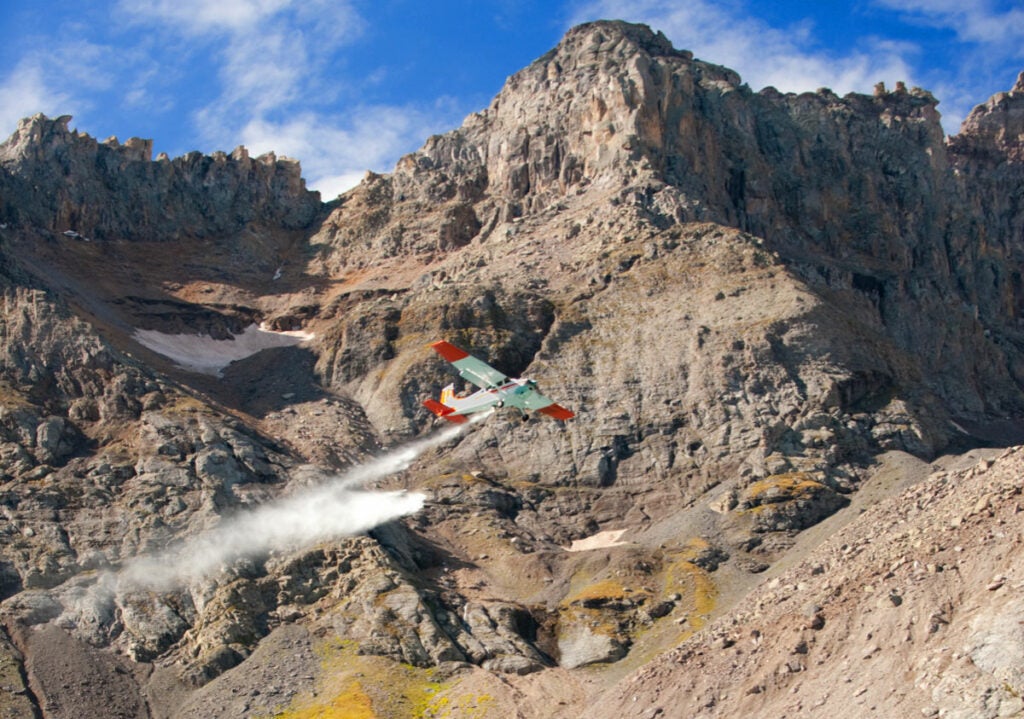 Hardly anyone believes me when I tell them… The Colorado Division of Wildlife stocks native cutthroat trout in high altitude lakes with airplanes. No Joke.

Flying modified Cessna 185 airplanes, four specialized pilots stock the native trout in around 300 lakes ranging in altitude from 10,000 to 12,000 feet. They drop hundreds to thousands of fish on each bombing run before they cycle back, fill up with more fingerlings and head out for another white-knuckle pass over the Rocky Mountains.

DOW Pilot Steve Waters agreed to let me tag along and shoot the operation from start to finish, from installing the specially designed “fish tank” to watching an actual fish drop in the shadow of Mt. Sneffels, high in the San Juan mountain range. 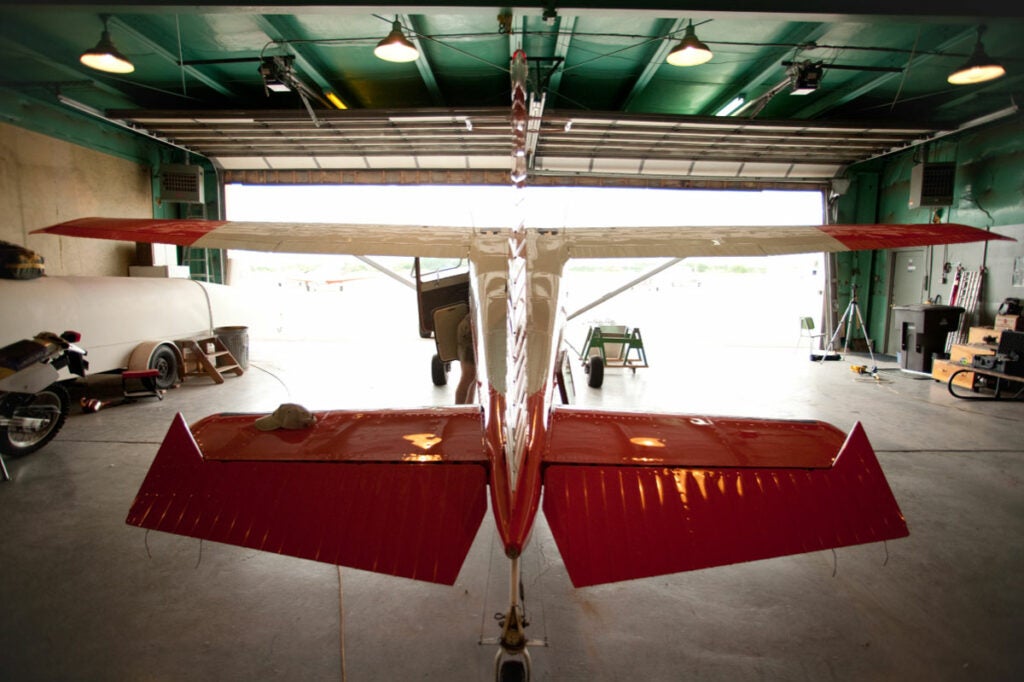 The airplane used by all four of the DOW pilots is nothing exotic. The stock, slightly modified Cessna 185, is considered the workhorse of the bush up in Alaska, but is somewhat more rare in the lower 48. My brother, also a pilot, described it as a “jacked-up diesel F350” as it’s one of the highest horsepower to weight ratio airplanes out there. The airplane has no back seats, no front passenger seat, and in this case, a “camera hole” option is utilized for the chute that dumps the fish. 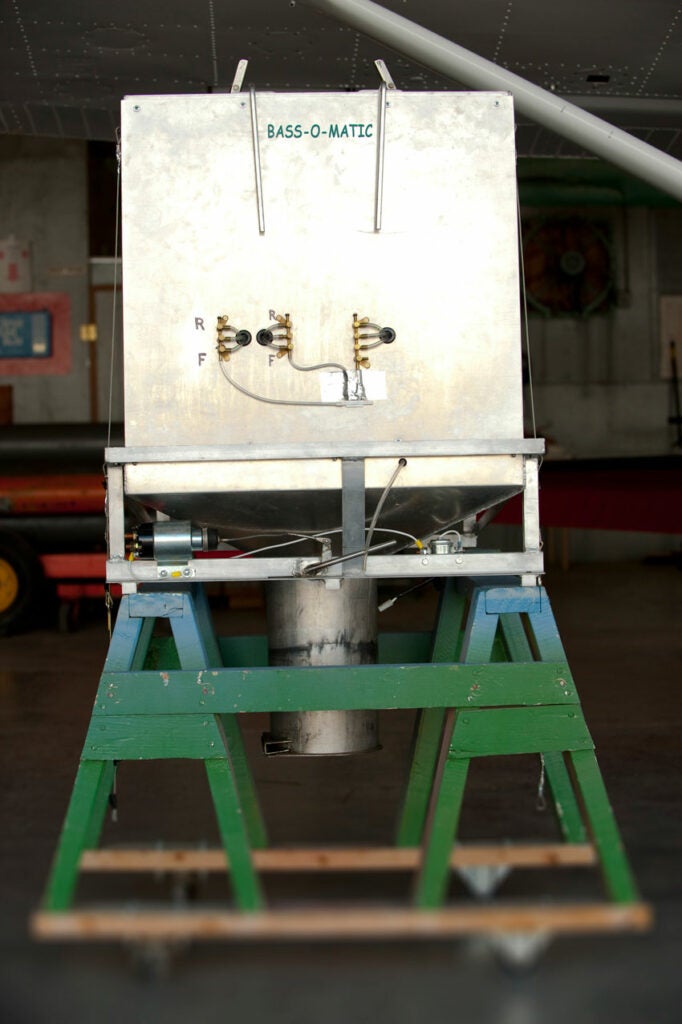 Looking slightly sinister, like a bomb resting in its cradle before the drop, the hopper containing the tiny cutthroat sits waiting to be loaded onto Waters’ airplane. He’s aptly named it the BASS-O-MATIC after the 70’s SNL skit that turned an ordinary fish into a blended smoothie. Ironically, DOW studies show that over 85 percent of the tiny fish actually survive the fall.

All fish that are dropped from these airplanes are miniscule. Most are not much longer than an inch. The small size allows two things: pilots can load many more fish per run onto their airplanes; and with less mass falling from the sky the chances for survival go up dramatically. 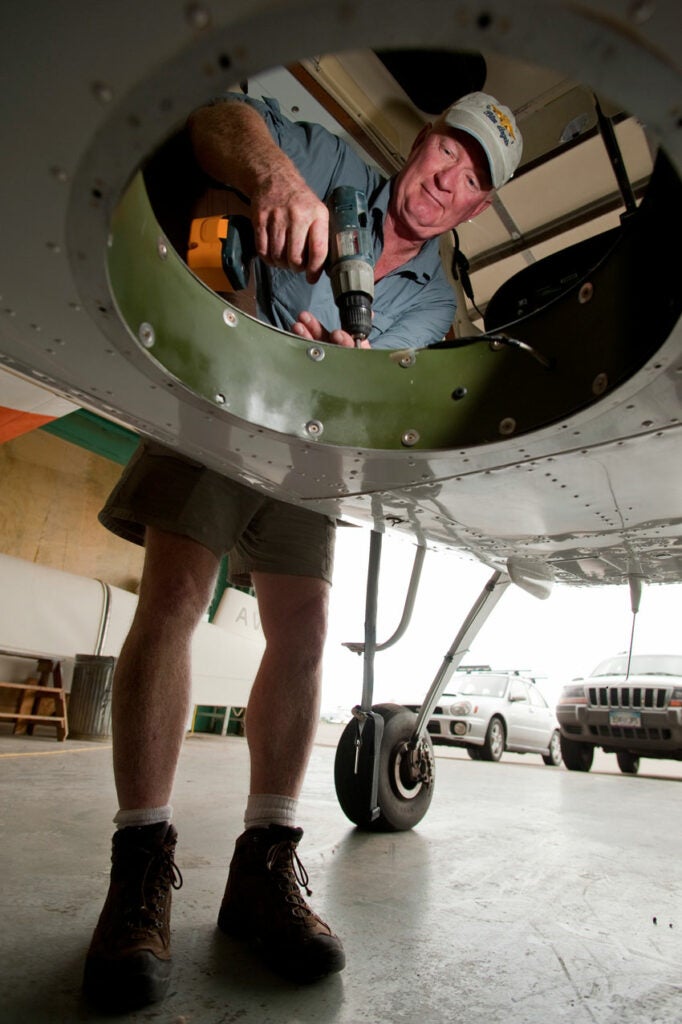 Waters unscrews the plates from the bottom of the airplane that Cessna originally designed for aerial photography. Some of the pilots actually use the hole for just that purpose. Of the 600 to 700 hours Waters will fly this year for the CDOW, less than 40 will be for fish stocking. The rest being spent doing telemetry work. Tracking radio signals on tagged animals, inventorying antelope numbers, looking for winter kill, etc… While most sane people would turn green at the idea he claims it’s the most fun he has all year.

The fish hopper consists of nine four-gallon compartments (each are emptied on their own) and is settled in the center of the airplane. It’s put in the airplane only for a couple of weeks each year in late August or early September. It’s a simple mechanism. Each compartment dumps sequentially into the bottom of the concave shaped hopper. The pilot hits a bomb button on his yoke firing a small solenoid which forcefully swings the trap door below, dropping the fish to the water. 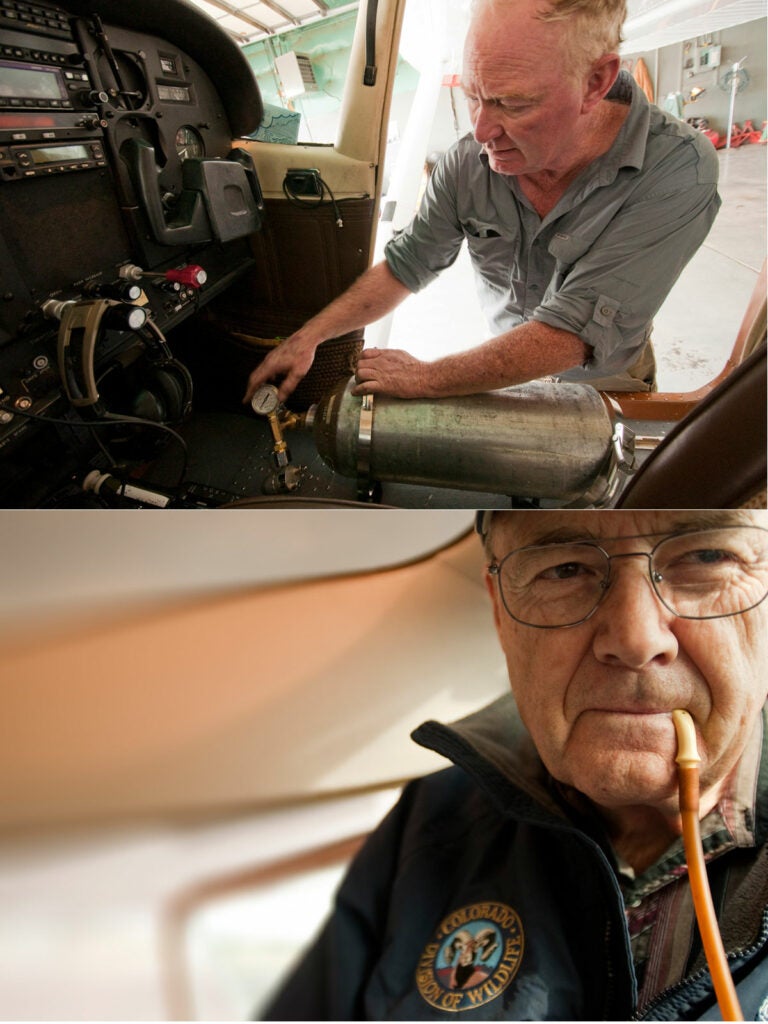 Just like any cold water fish, the cutthroat need quite a bit of oxygen en route, so a full tank of O2 is loaded where the front seat normally would be. Flying at high altitudes for hours at a time in an unpressurized airplane can lead to a lack of oxygen for the pilots and even hypoxia if not careful. To keep sharp and their wits about them, the pilots have devised a splitter off the tank of O2 and every so often they take deep pulls just like the fish in the tank behind them.

Like something out of a video game or even an honest to goodness air force bomber, the switch that toggles the trap door for each bombing run is located at the top of the airplane’s yoke. Occasionally the pilots have hit this button without realizing a camper was swimming, or a float-tuber fishing – drenching them with water and trout. Usually the pilots try not to hit people with their precious cargo, circling around if people are spotted and waiting for a clear drop. 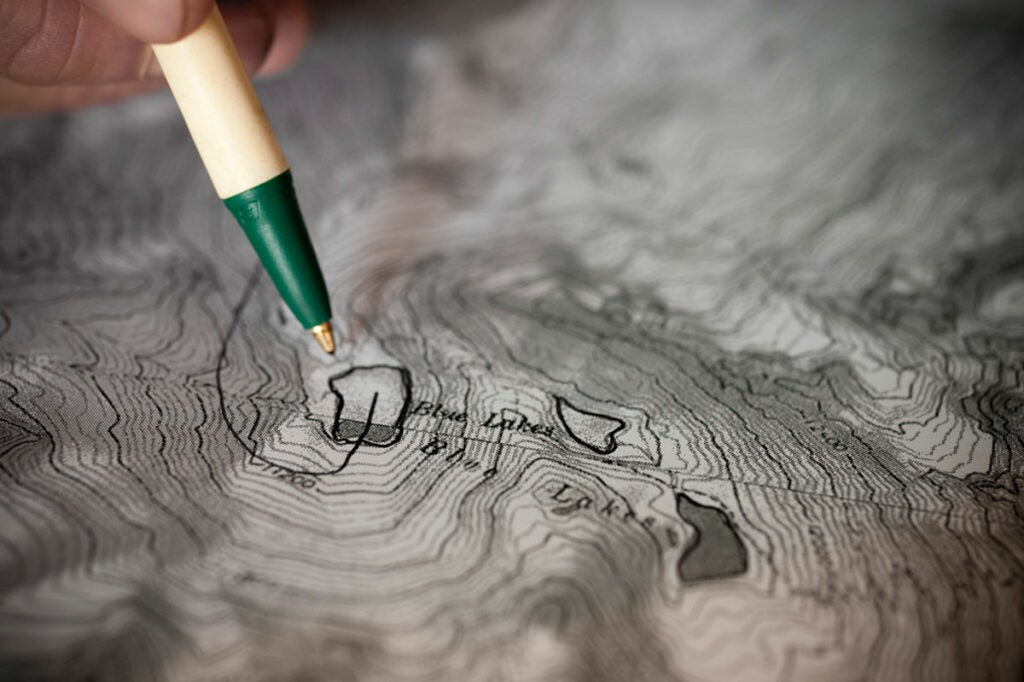 Planning these fish stocking missions is tricky business that takes skill and careful plotting. The Cessna 185 may be a beast, but it’s engine isn’t turboed and has about half the horsepower it would at sea level. One tiny mistake or a misread wind current and it’s highly likely that not only thousands of tiny cutthroat will be in the lake, but so might Steve and his 185. 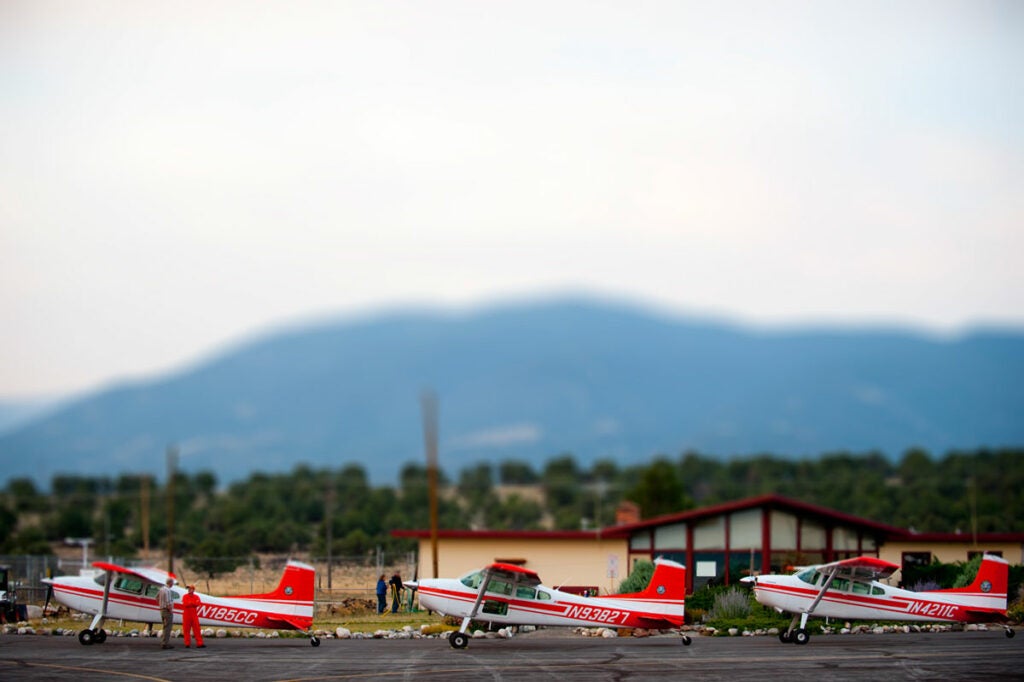 The day of the drop. I arrive at an empty tarmac at dawn. Slowly, one by one the pilots, – Steve Waters, Brian Smith and Al Keith – drop out of the sky and land at the Silda Airfield in South-Central Colorado for a rendezvous with the Mt. Shavano Hatchery crew who will fill their planes with ice, oxygen, water and fish.

Brian Smith fills his hopper with ice and water from the nearby DOW truck parked on the side of the Tarmac. The hatchery crew maintains the temperature, pH, and oxygen levels of the water for the fish all on site at the airfield. DOW biologists are responsible for deciding what fish go where and how many go in each lake. 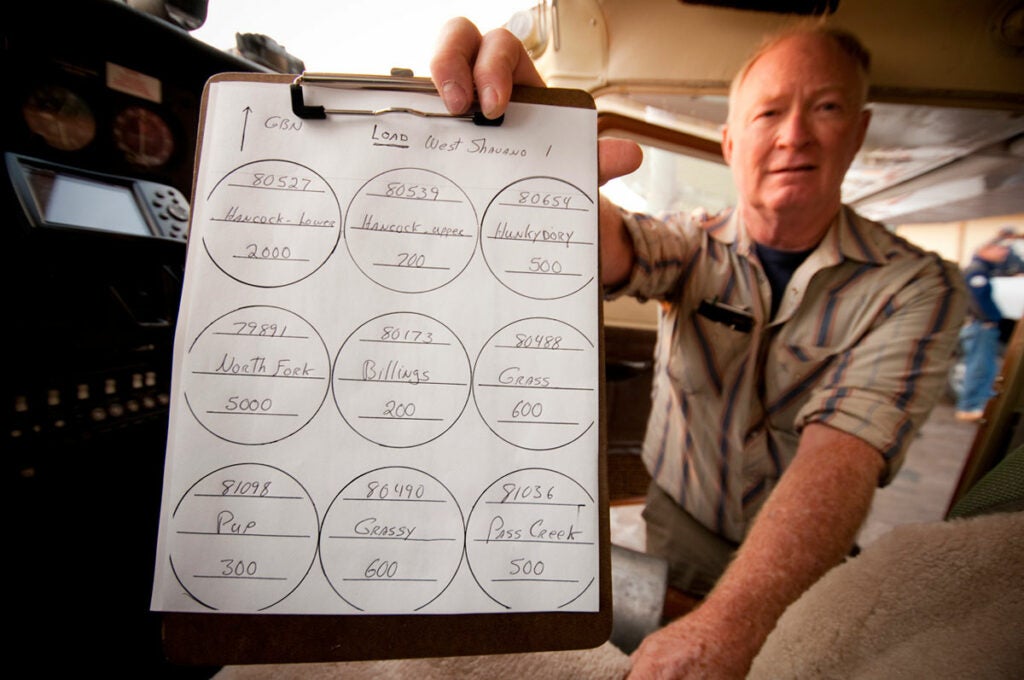 If you ever want the really good fishing info for the high mountain lakes in Colorado, ask a DOW pilot. Here, Steve Waters holds his “load sheet” for this specific drop. You’ll notice each circle corresponds to one of the hopper “compartments” and is labeled with the lake name and how many fish are supposed to be dropped. Some lakes only get 150 fish while others get up to 5000. The norm is somewhere between 500 and 800 fish, according to Waters. 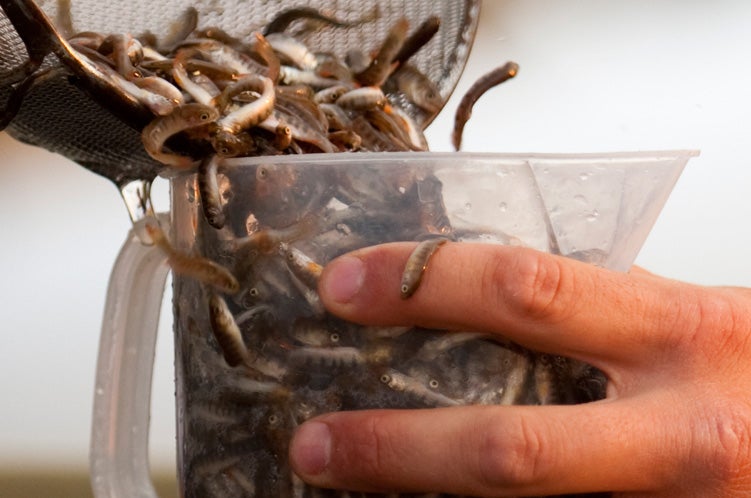 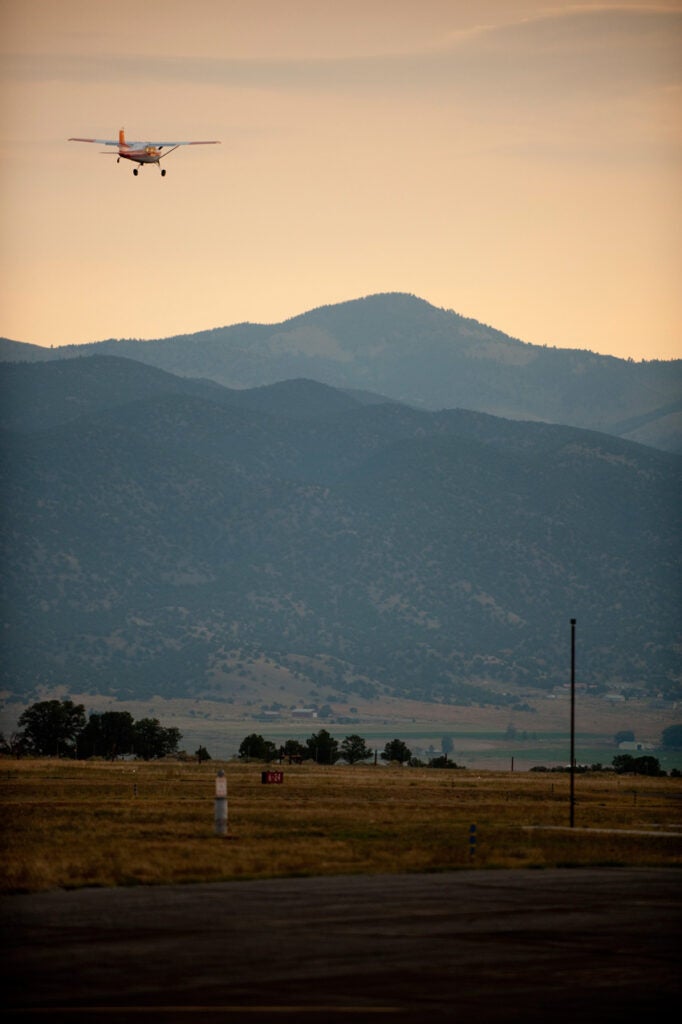 Take off, with a full load of fish. When I asked Waters what would make a perfect drop, he responded by saying that each one was different, but if he was to have it his way he’d be 150 feet off the surface of the lake and flying exactly 90 miles per hour. Any slower than that and it becomes tough to maintain stability. 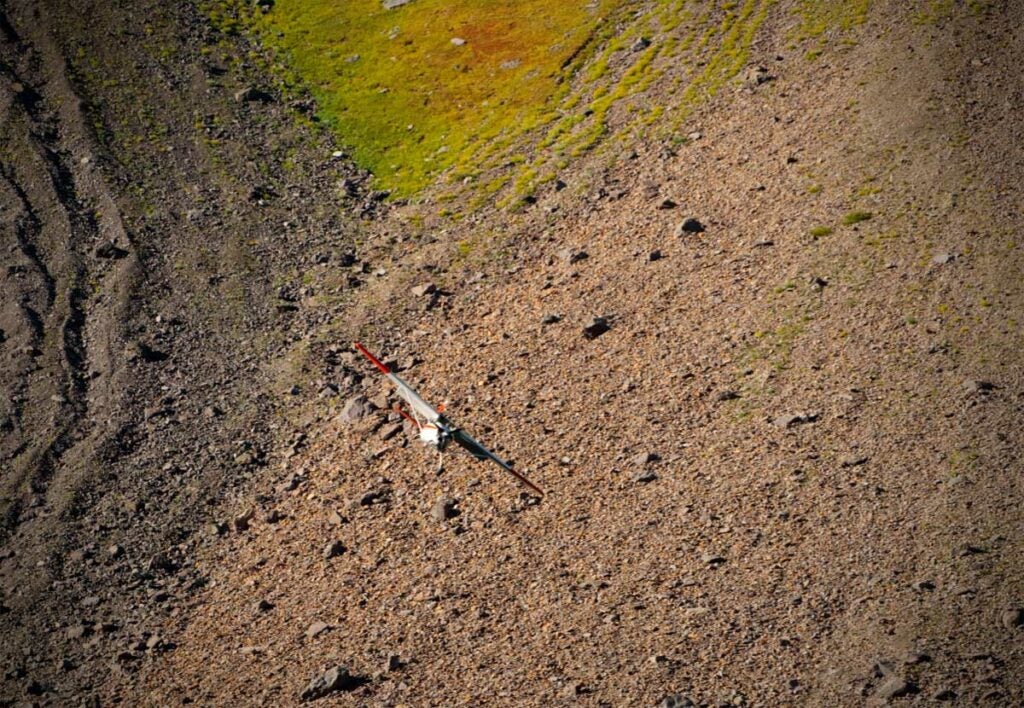 Flying these extremely risky missions requires not only very talented pilots, but the weather has to cooperate 100%. Most missions are flown very early in the morning and in the late summer when thunderstorm activity is not as prevalent. The pilots are the ultimate deciders if a drop is going to happen or not. They won’t stock in clouds or in much of a wind. Here, Waters utilizes his dash-cam to film a particularly gnarly approach into what seems like an appropriately named lake, Deadman West. If you listen closely you can hear the bomb bay door open at the 1:23-1:24 mark. 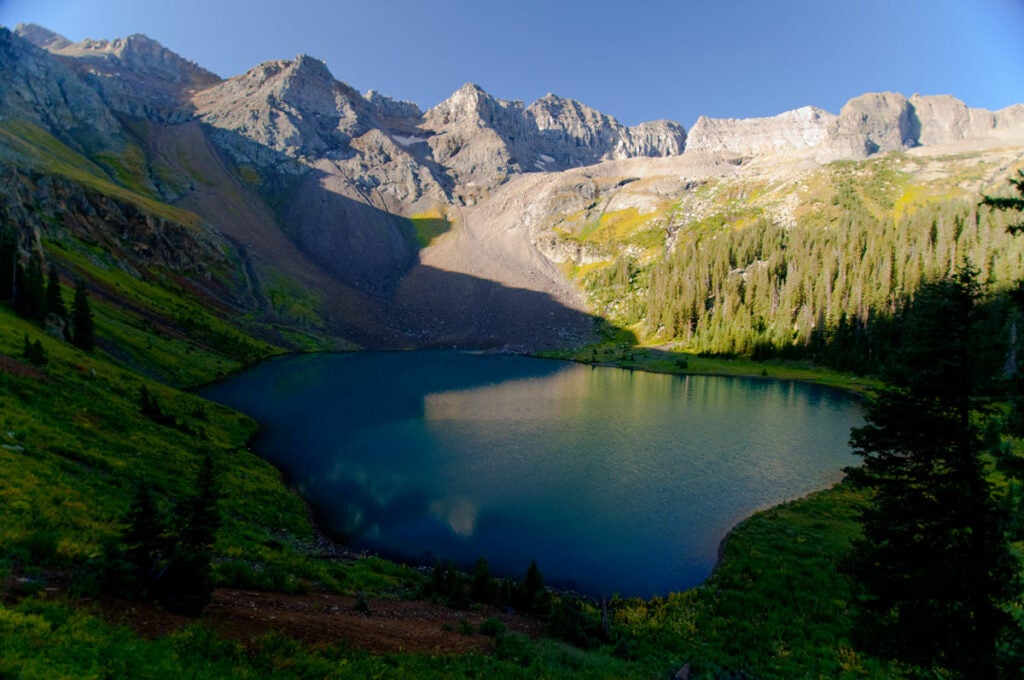 Clear-air turbulence is another matter and probably one of the more dangerous parts of the job. “Think of the air currents around the mountains like water tumbling over rocks in a river; on the (upstream) side, the water can be calm, but on the (downstream) side, it bubbles and churns,” says Waters. “It’s the same in the air. So we have to be very careful when we make our approaches and escapes. We almost always go in and out [of a lake drop zone] the same way.” Notice a plane entering the frame in the top right corner. 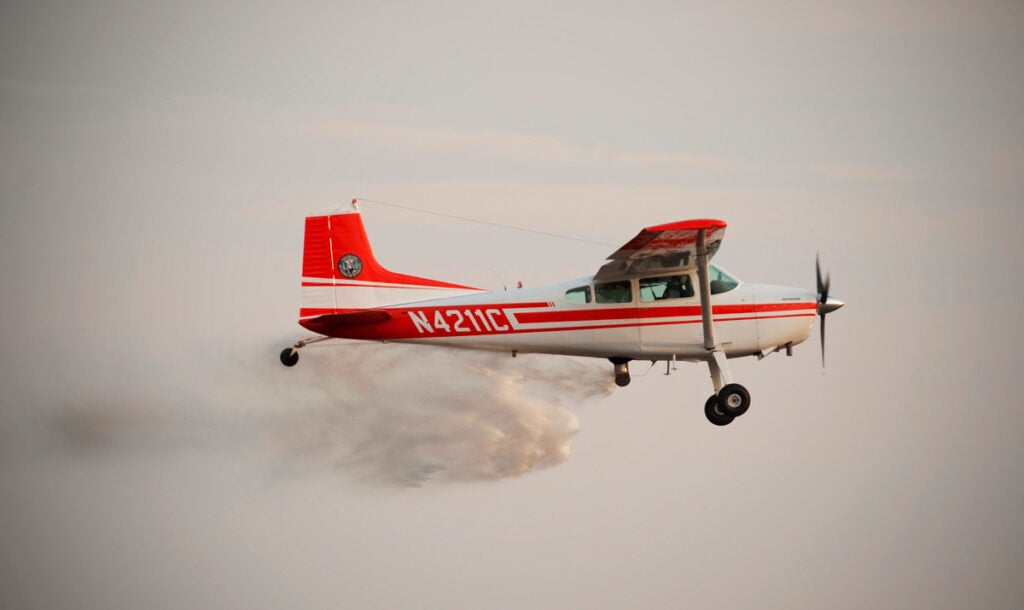 In the rare event that you were to witness one of these drops from the ground you wouldn’t see many fish. The tiny cutthroat are so small you cannot see them from the ground even if you were looking directly at plane when the water is released from the hopper. 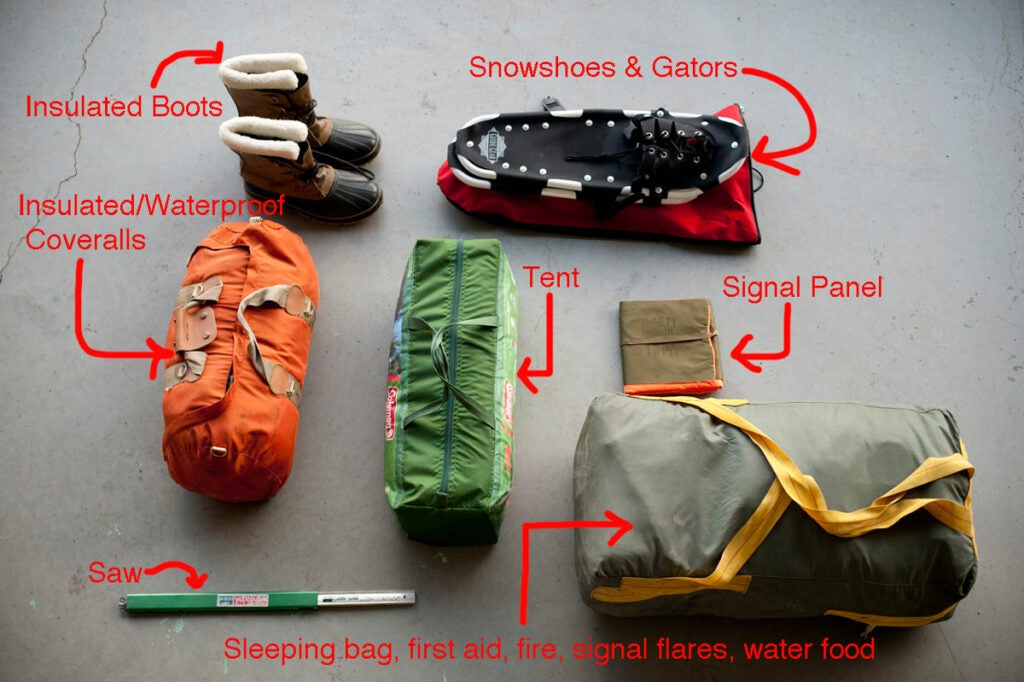 Besides the hopper, water and fish, Waters carries only one other thing on his airplane, a survival kit. In total, the kit weighs 55 to 60 pounds. “Some people carry more, some less” Waters tells me. “Less weight equals greater performance from the airplane.” Waters’ kit consists of insulated waterproof boots, snowshoes and gators, insulated/waterproof coveralls, a tent, signal panel, sleeping bag, first aid materials, six ways to start a fire, signal flares, water, and a tiny bit of food. 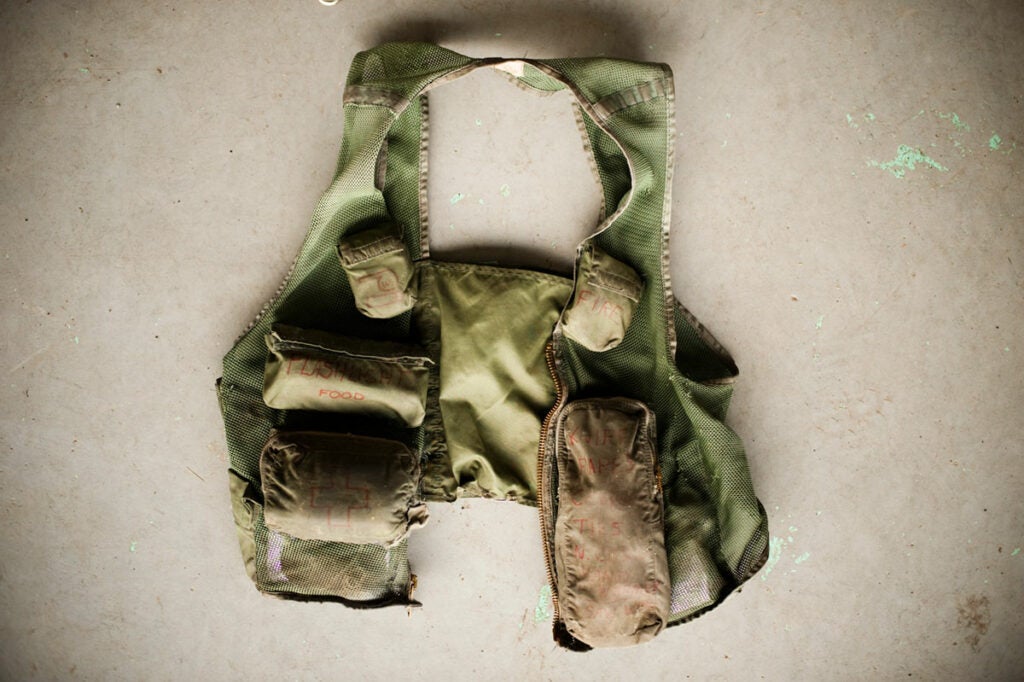 Actually two survival kits. Each of the DOW pilots wears a survival vest, too. In the event that the tail section of the plane has broken away or he is so incapacitated by injury that he cannot reach the survival kit, the vest has the basics like flashlight, signal/whistle, and first aid. Regardless of the serious obstacles and dangerous conditions, Waters finds his role as one of four DOW pilots a tremendously gratifying job. Barring the amazing views and adrenaline-filled days, he knows that he’s allowing future generations of Coloradans the opportunity to enjoy the legacy of native fish in untouched wilderness. 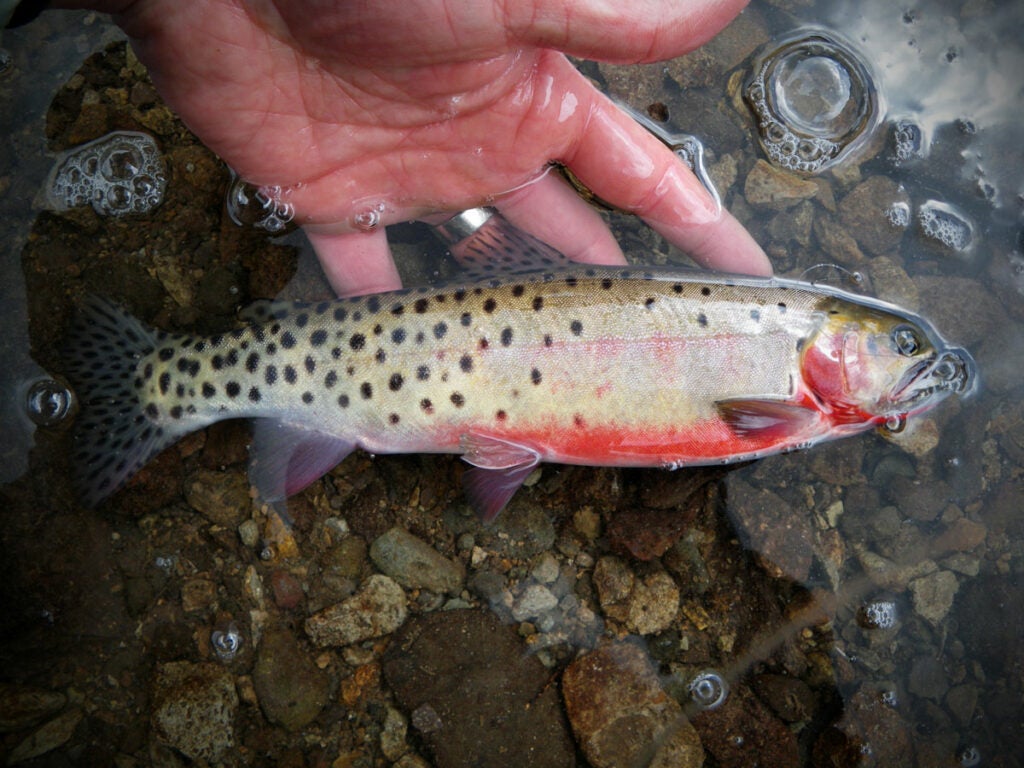 I knew before taking this trip to southern Colorado that I had to bring a fly rod and at least try and catch one fish Waters has dropped over the years. On top of all my pounds of camera and camping equipment I stashed a spartan five weight set up. After Waters had flown his drops and I had broken down camp, I fished for a solid two and a half hours before I nailed a fish. I brought him to shore, released him said my thanks to Waters and the other DOW pilots before starting the long hike to the valley below.