You can also read this story in the December, 2011 double issue of Field & Stream magazine. 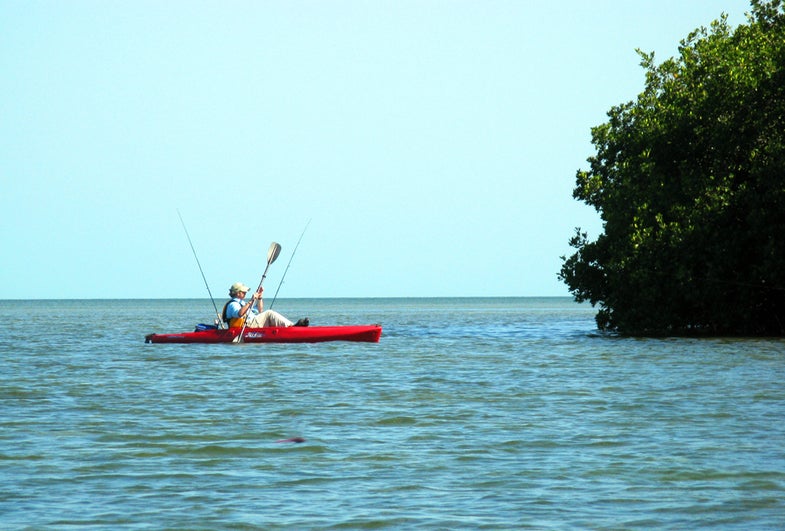 Can two fishermen escape the icebound Northeast and find warm water, solitude, and fantastic fishing all on their own for dollars a day? March 2010, central New Jersey. Dirty gray skies above. A foot of crusty snow on the ground covering another compacted 4 inches from February that never melted. Buried under it are my kayak and any desperate hope for an early start to using it. I'm visiting my friend John Braun. We're drinking coffee at his kitchen table, carping about the weather and failing to get enthused about the stripers and fluke we'll go after in Barnegat Bay from our kayaks--if the snowpack ever recedes. Both of us have houses that aren't paid off, kids in college, and wallets bulging with credit card receipts. As much as our souls need it, neither of us is in a financial position to fly to Abaco, get poled around a white-sand bonefish flat by a smiling barefoot guide, and recount the adventure during a mango-colored sunset over minty mojitos in a tiki bar. So instead we stand in our damp garages with cans of beer and replace corroded treble hooks while wet snow pelts the windows. "We need to get out of Jersey next winter," I tell John. "Find some warm weather and a lot of fish. That we can kayak to. Do it ourselves." John, who has been tearing apart reels and building rods through four blizzards, doesn't even take a glance at his wife sitting next to him. "I'm in." That's settled. Now all we have to do is find a place we can afford. John Braun paddles toward a deep cut that looks like a home to keeper mangrove snappers alongside Johnson Key..
SHARE

You can also read this story in the December, 2011 double issue of Field & Stream magazine.