F&S Classics: Take a dive into the archives for the stories and photos behind record fish that are still as impressive... 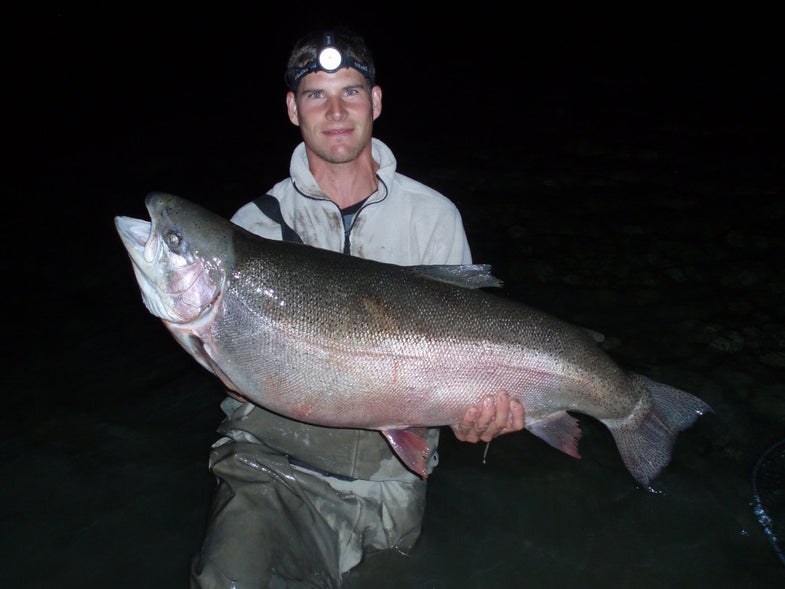 In the late-night darkness of Saturday, Sept. 5, 2009, Spruce Grove, Alberta, Canada, resident Sean Konrad boated what is now awaiting certification as the new all-tackle world-record rainbow trout. The fish weighed a staggering 48 pounds, beating the current 43-pound 10-ounce world record (which was caught by his identical twin brother, Adam, in 2007) by 4 pounds 6 ounces. Both fish came from Diefenbaker Lake, in Saskatchewan, Canada. Scroll through the slides at left for the rest of the story. Sean Konrad
SHARE 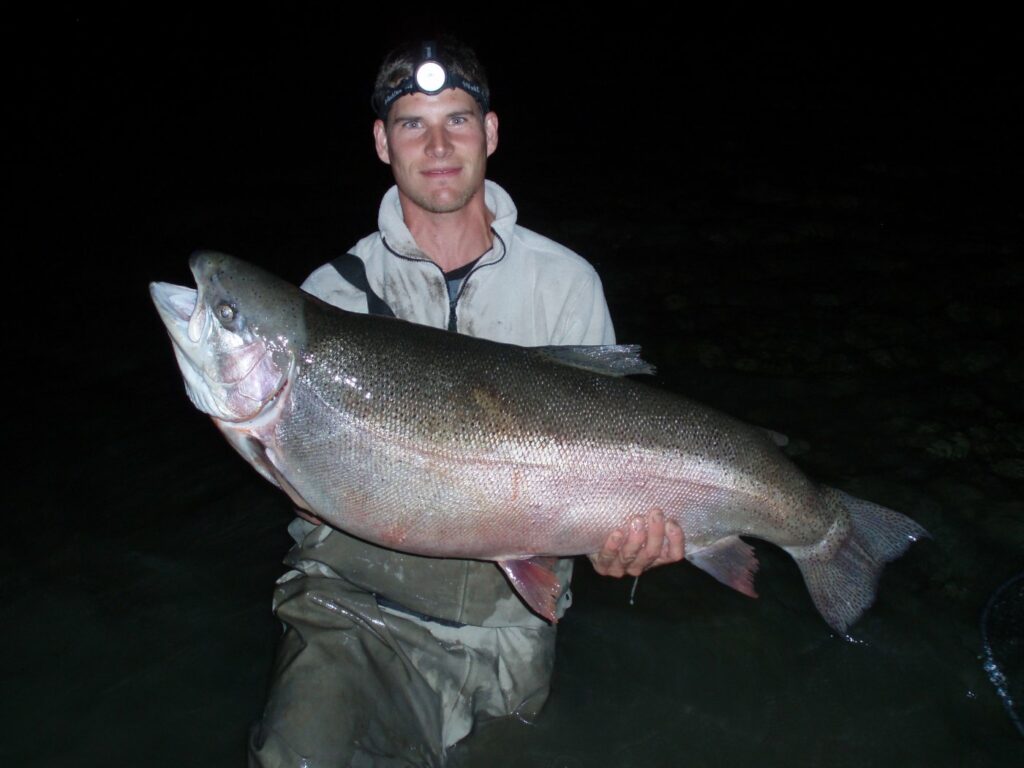 In the late-night darkness of Saturday, Sept. 5, 2009, Spruce Grove, Alberta, Canada, resident Sean Konrad boated what is now awaiting certification as the new all-tackle world-record rainbow trout. The fish weighed a staggering 48 pounds, beating the current 43-pound 10-ounce world record (which was caught by his identical twin brother, Adam, in 2007) by 4 pounds 6 ounces. Both fish came from Diefenbaker Lake, in Saskatchewan, Canada. Scroll through the slides at left for the rest of the story. 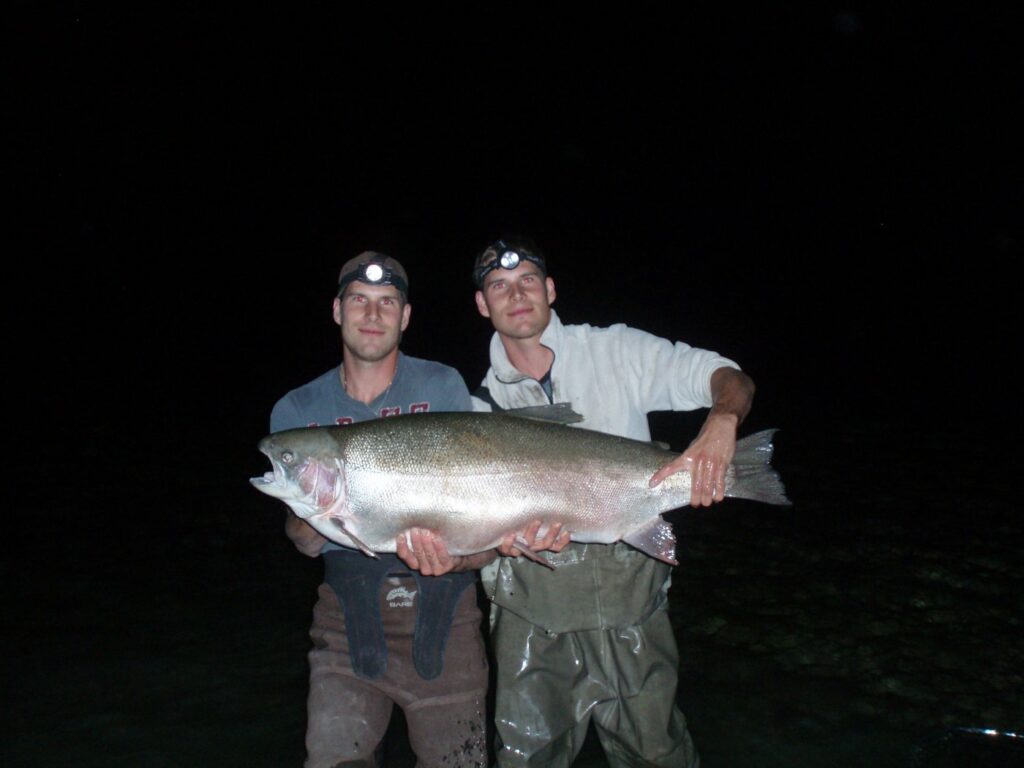 Here are the 29-year-old brothers holding the fish soon after the catch. “I’m always at the tail of a fish when we’re photographed together,” says Sean, “it’s been our system since we were kids. The two were on a hard-core fishing trip they take each year — fishing together has become a rarity since they started guiding part-time. The duo has been taking clients for potential world records since Adam’s first record catch. The full-time auto mechanics have guided several clients to line-class world-record ‘bows. 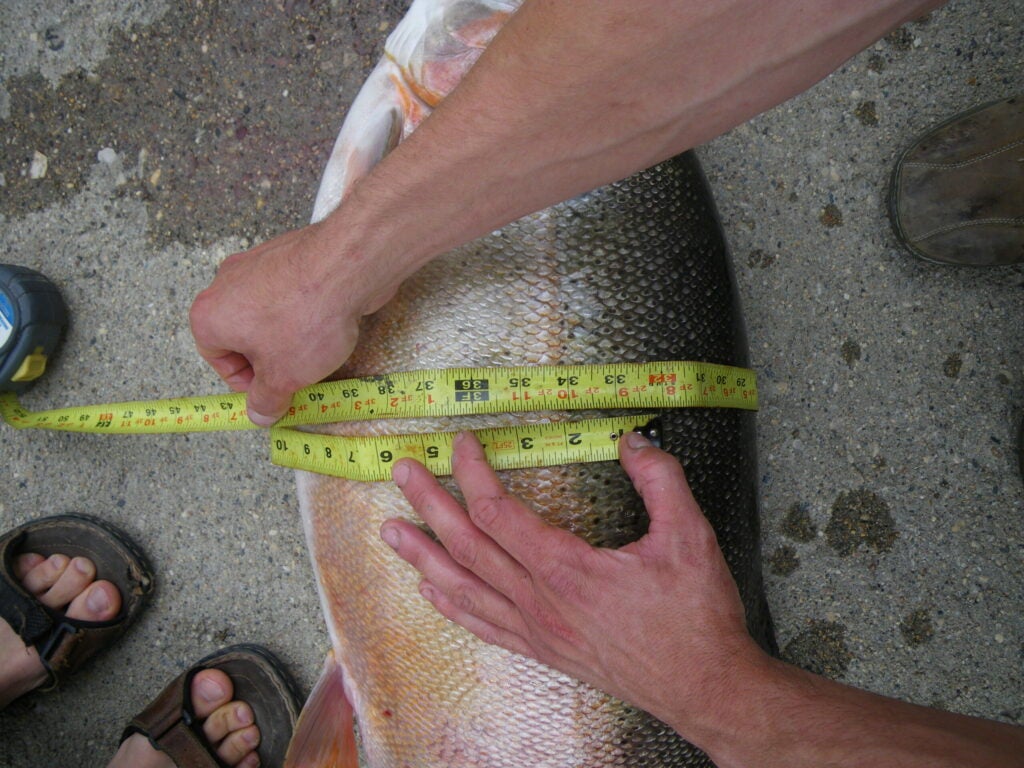 The fish had a girth of 32 inches. Both record fish have the classic football shape of an anadromous triploid fish (genetically-altered for growth), which has been the subject of much debate about whether these fish should have their own classification for world-record status. “We’re having this fish tested to see it was wild. There are lots of 4 pounders in Diefenbaker, which shows there’s natural reproduction going on upstream,” said Sean. 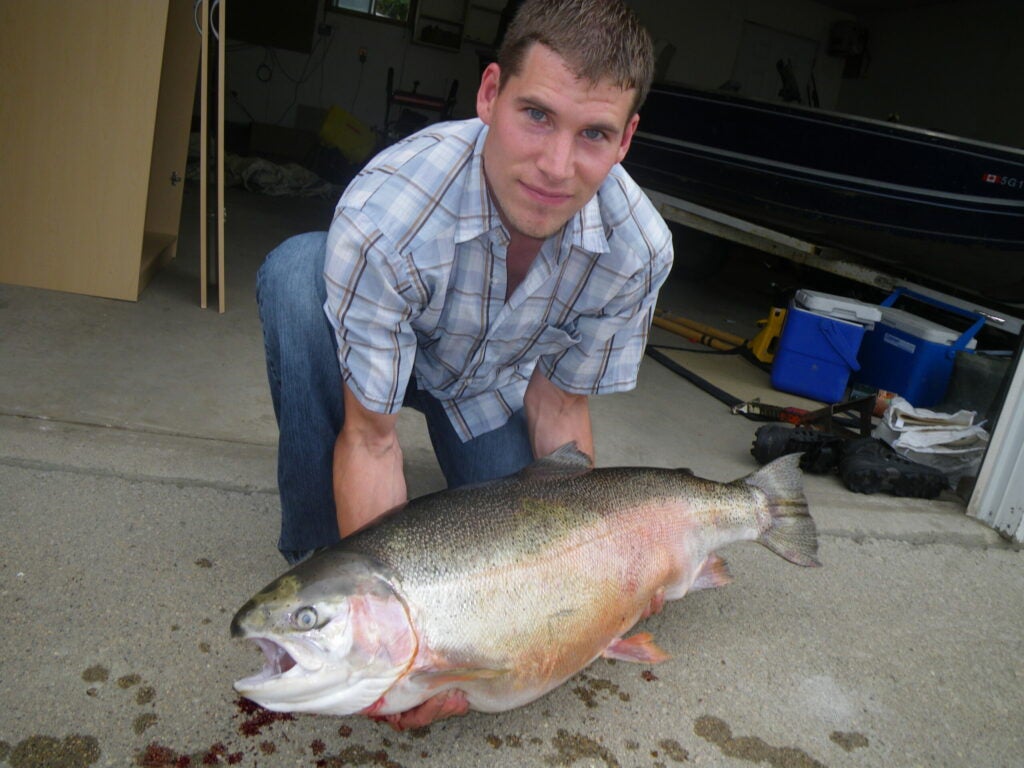 The fish, seen here the morning after, was 42 inches long. “We’ve been trying to get him a 40-pounder for a while. We finally did,” said Adam. “I used to answer the phone ‘World-Record Holder’ when he called. Now that table has turned!” 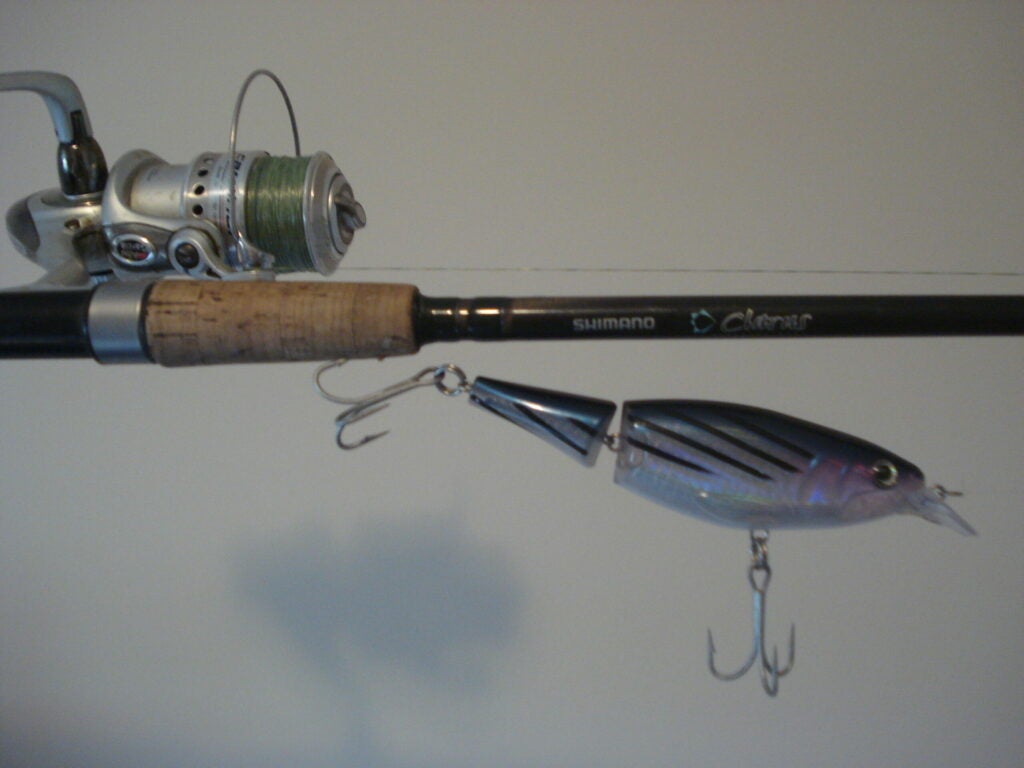 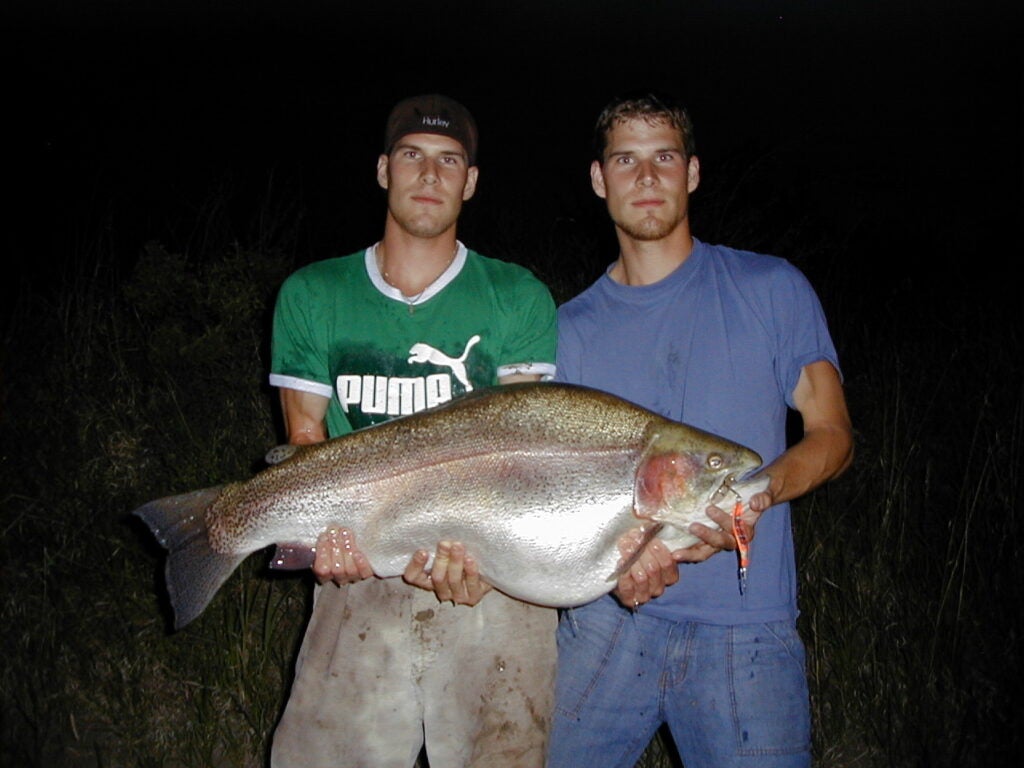 This shot is of Adam’s 2007 43-pound 10-ounce record rainbow. Adam was casting a Mepps Syclops spoon when his fish hit. Sean’s pending world record ate his X-Rap as he was fished it a stop-and-go motion while back-trolling. “The bigger the fish, the slower the action,” says Sean. “These giant trout can’t very swim fast. All you’ll catch is little 20-pounders if you fish too quickly.” 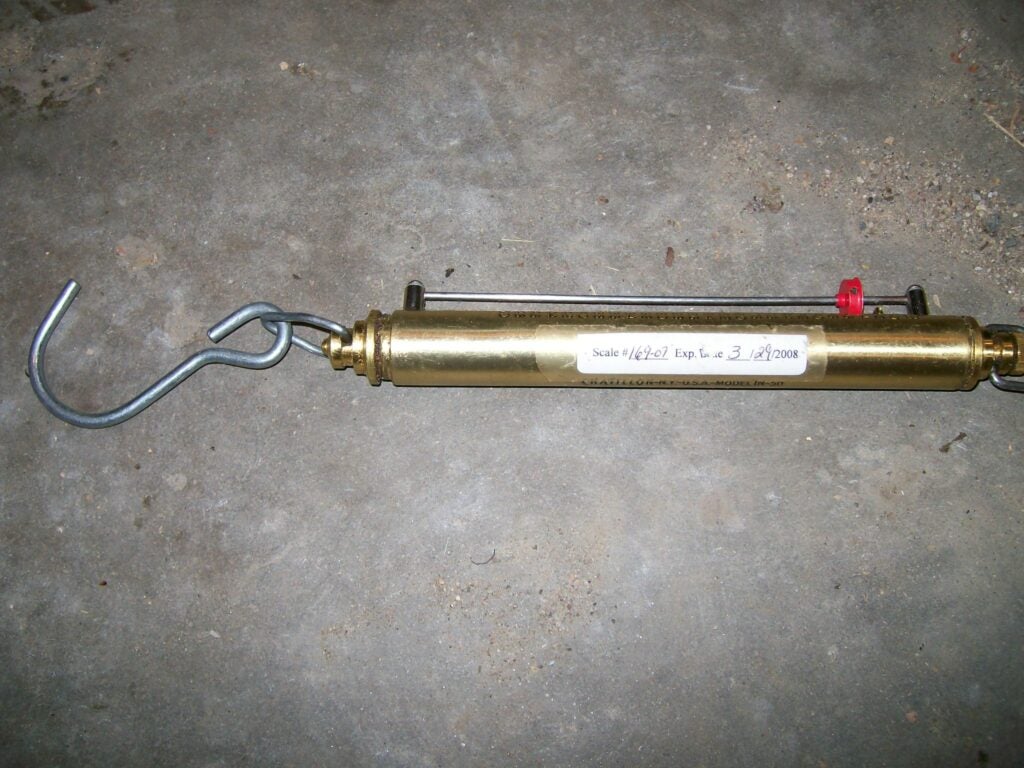 A shot of the scale the brothers use to check the weight while on the water. “We get this scale certified by IGFA every year,” says Sean. 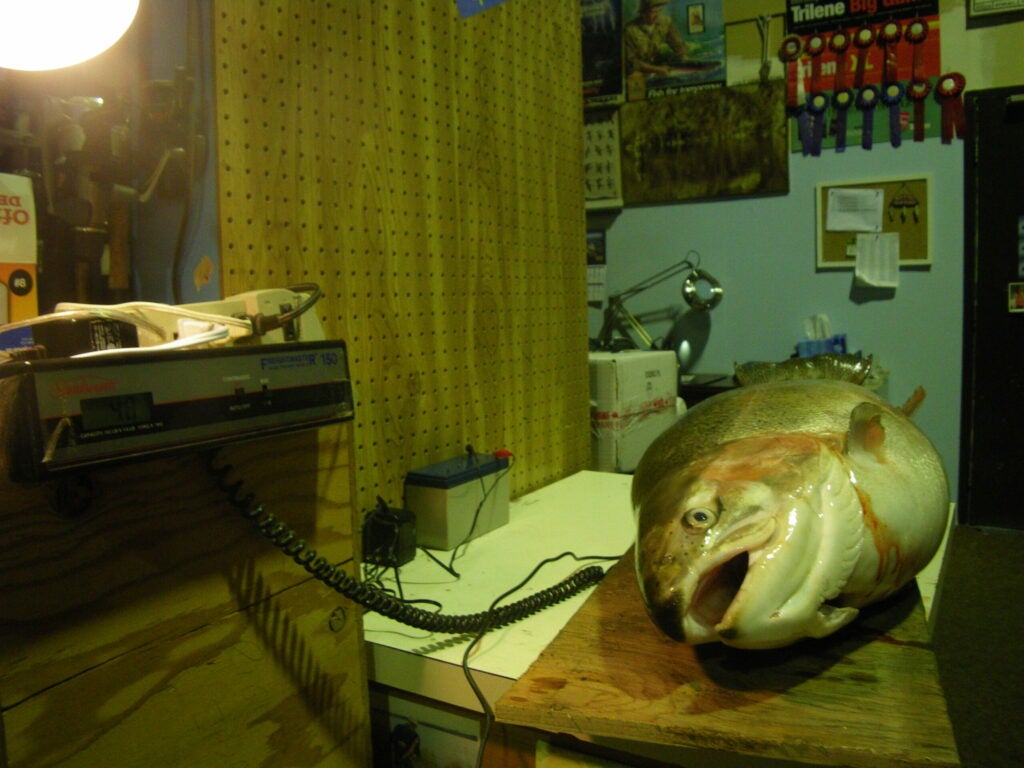 Here’s the pending world record on the post office’s certified scale in the back room of The Fishin’ Hole in Saskatoon. 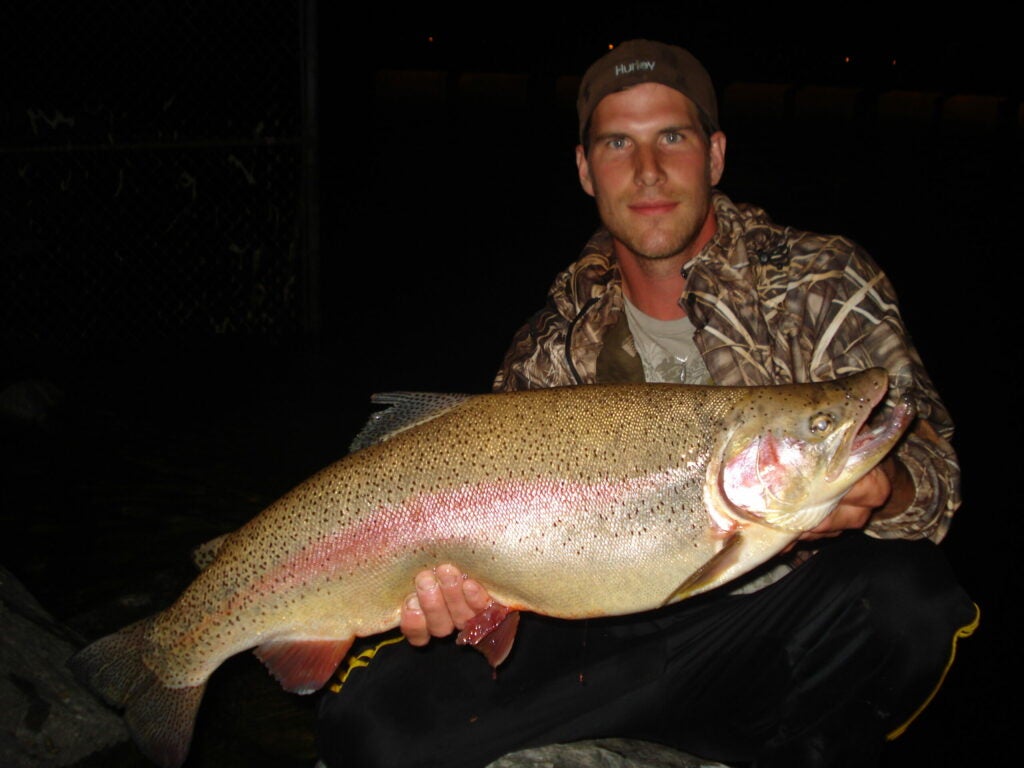 It’s not just Diefenbaker Lake where the two anglers shine. Here’s a shot of Sean just a month ago with an 18-pounder from the Kootenai River in Montana. “Our goal was a 25 pounder, but this 18 was the biggest we got. It was still the largest rainbow the locals had seen in a long time,” Sean says. 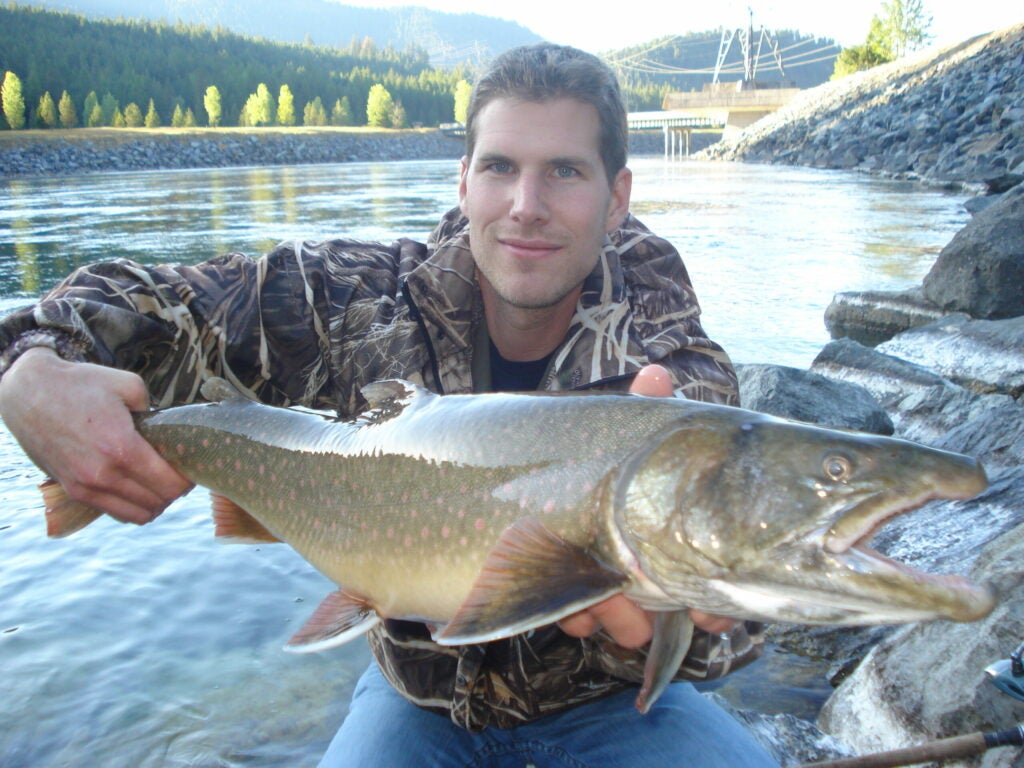 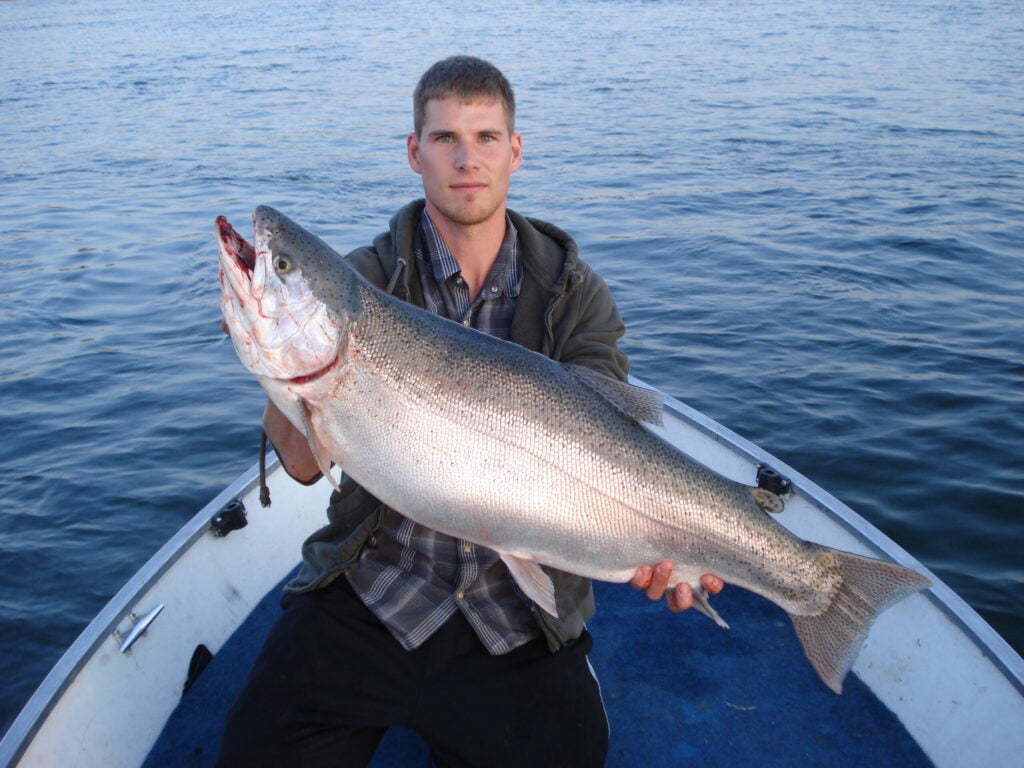 Not all of Diefenbaker’s rainbows are created equal. Here Sean holds a 41-incher that weighed 20-plus pounds – nearly the same length as the pending record fish, but half the weight. “It just goes to show you there are many different stains of rainbow in Diefenbaker. And there’s lots of different forage in there for all these fish to feed on, including whitefish, and that’s why they get so big so quickly,” says Sean. 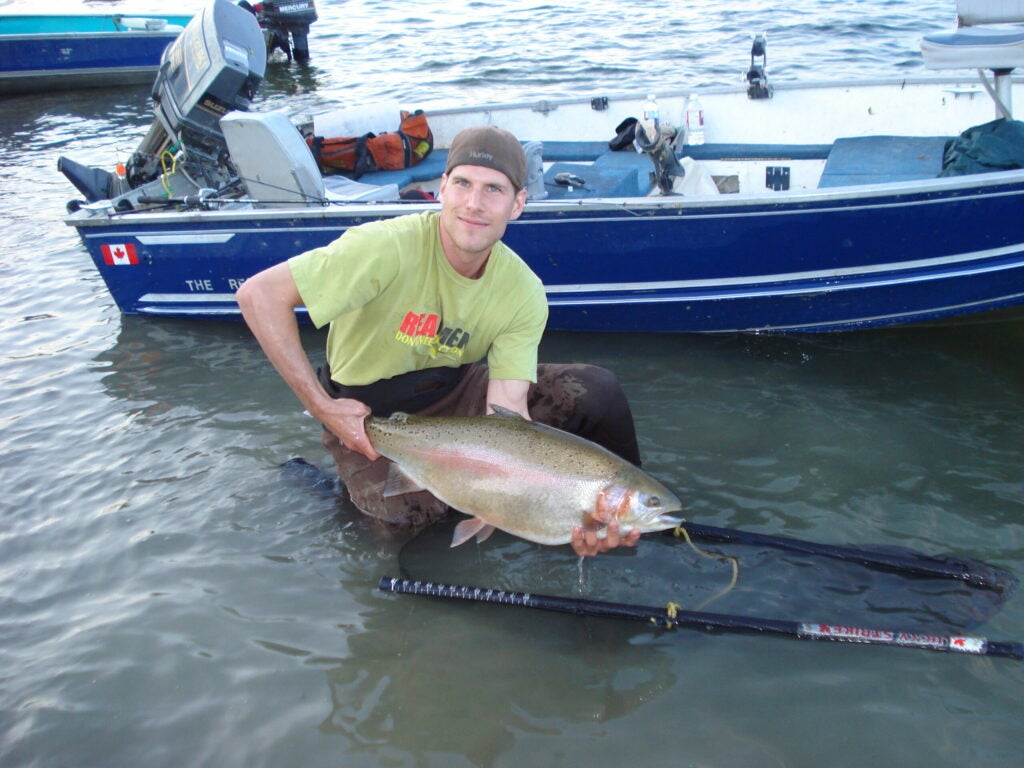 The Konrads don’t get fancy with their gear. They fish in both small boats and from shore. Here Adam holds a 26-pound Diefenbaker ‘bow caught by one of his clients. 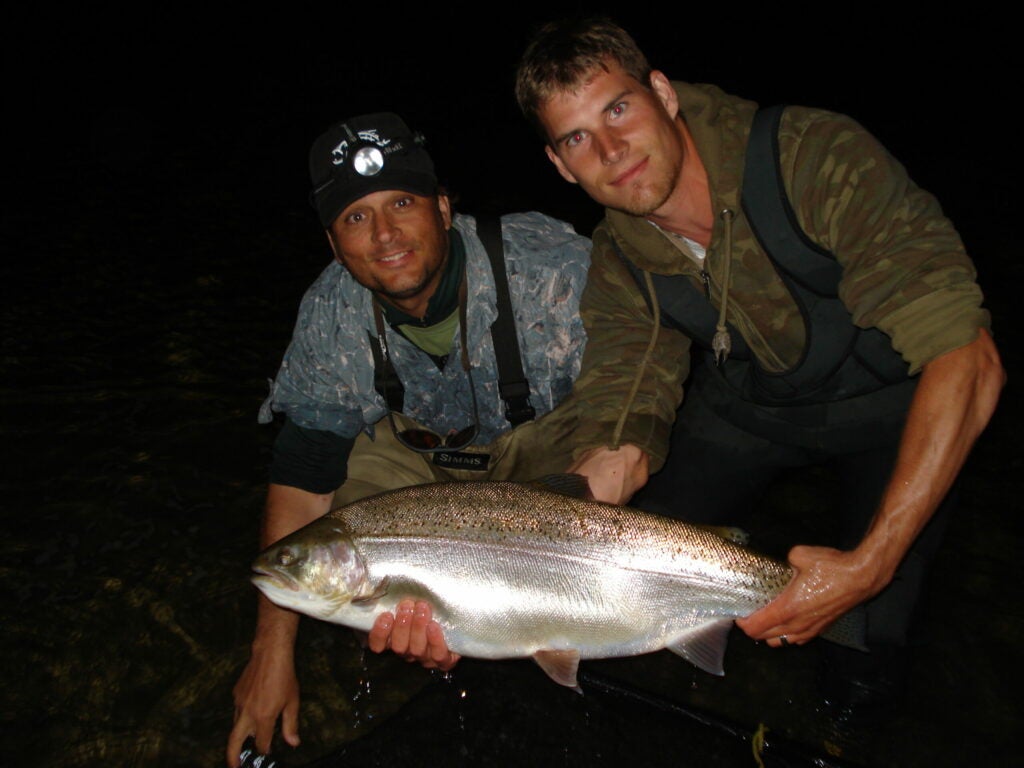 Here’s one of their clients with a 38-pound 30-pound-test line-class world record. Sean says the average catch is two trout per day. Twenty years ago the average was one fish every three days. 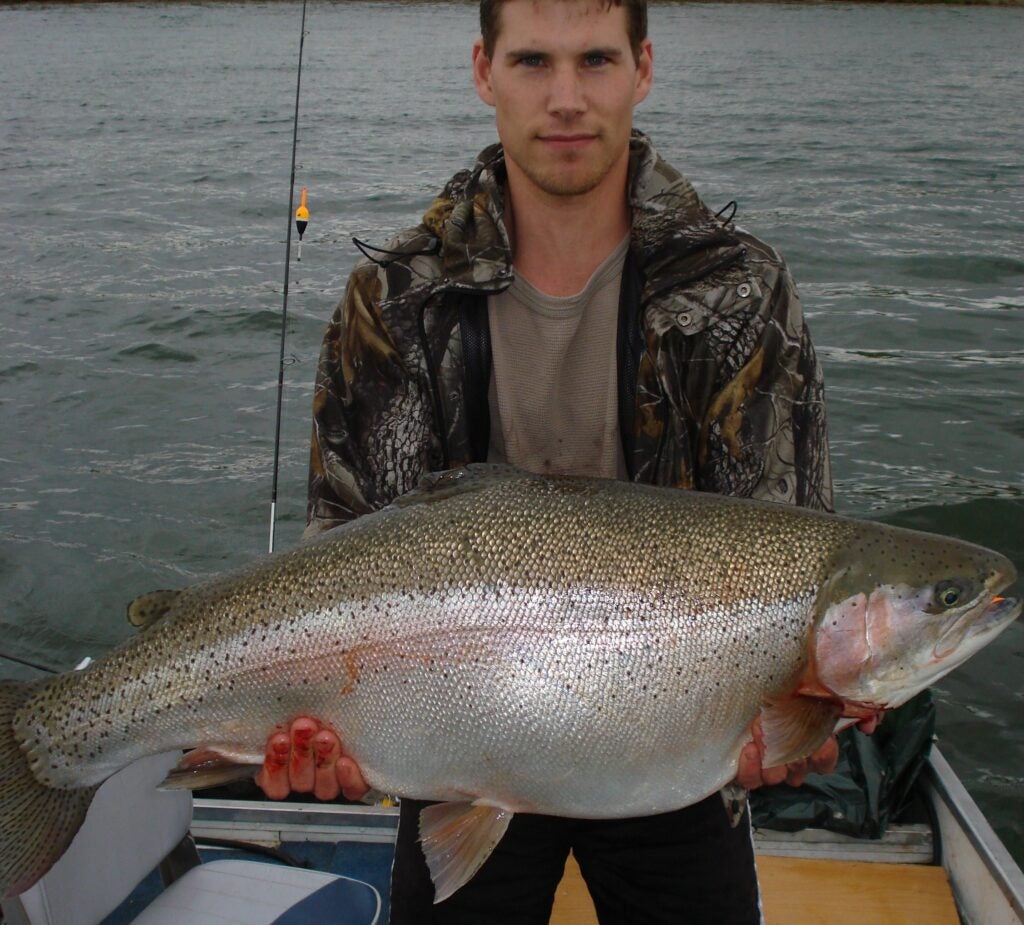 Here’s Sean with his largest catch prior to this record – a 37-pound 4-ounce behemoth that set the 16-pound test line-class world record. 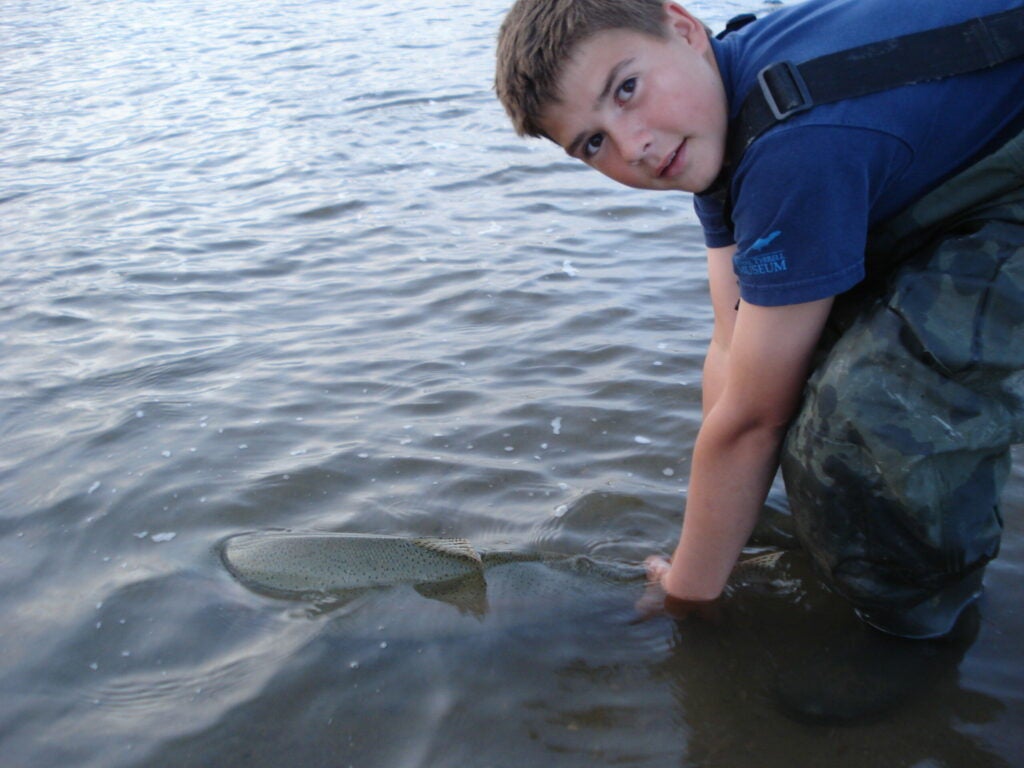 Most all the Konrad’s fish, as well their client’s fish, are released. Here one of their younger clients, Taylor Irwan, releases a 16-pounder. 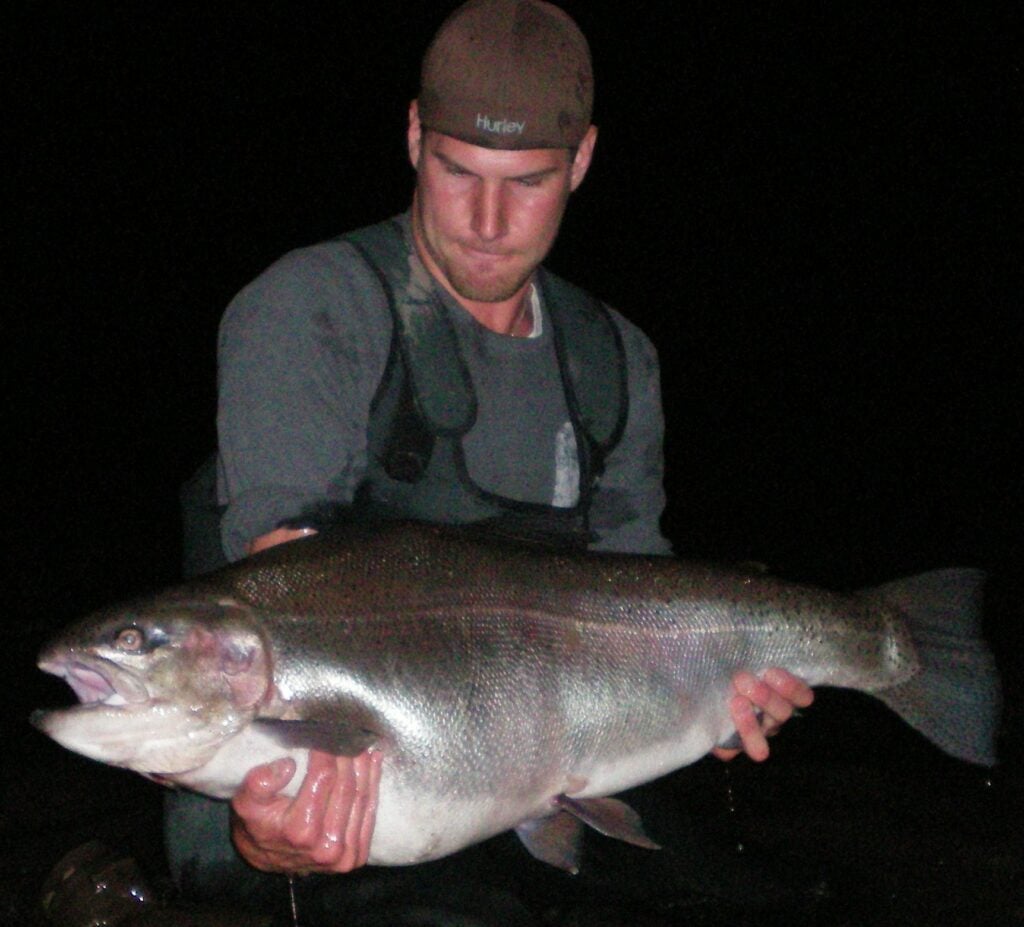 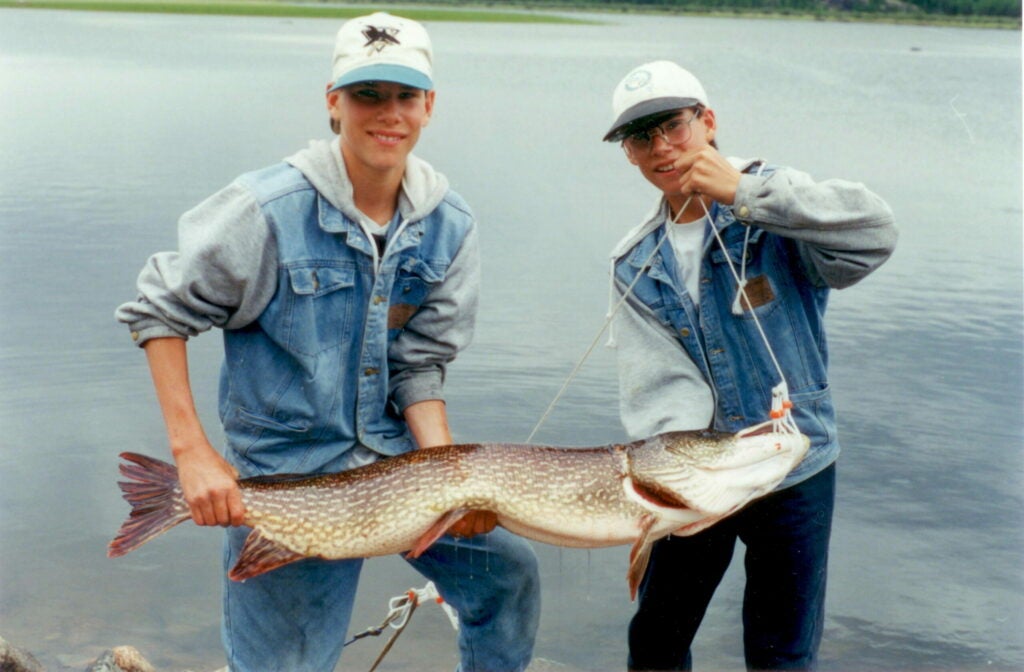 The twins are not newcomers to catching big fish. Here, in the tradition of Sean holding the tail, are the two at age 15, holding a trophy pike from Saskatchewan’s Wathaman River. 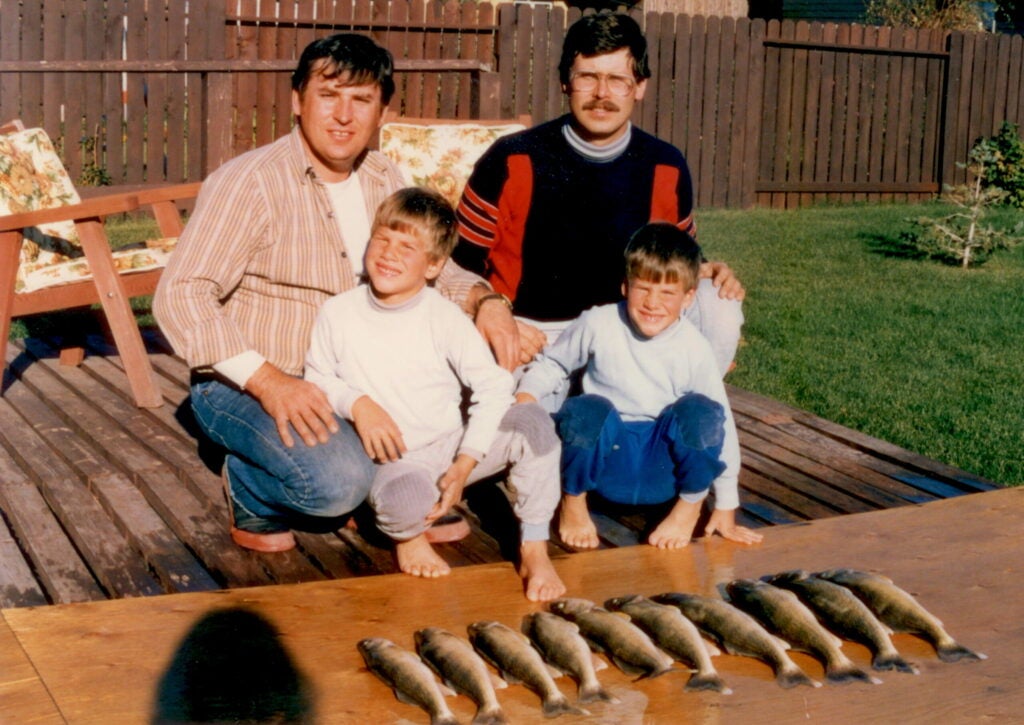 “I admit, I created those two fishing monsters,” says the boys father, Otto (left, holding Adam). “We fished and camped all the time.” This picture was taken after Otto, Adam, Sean, and dad’s buddy Ed, spent a day walleye fishing on Diefenbaker Lake when the twins were 5 years old. 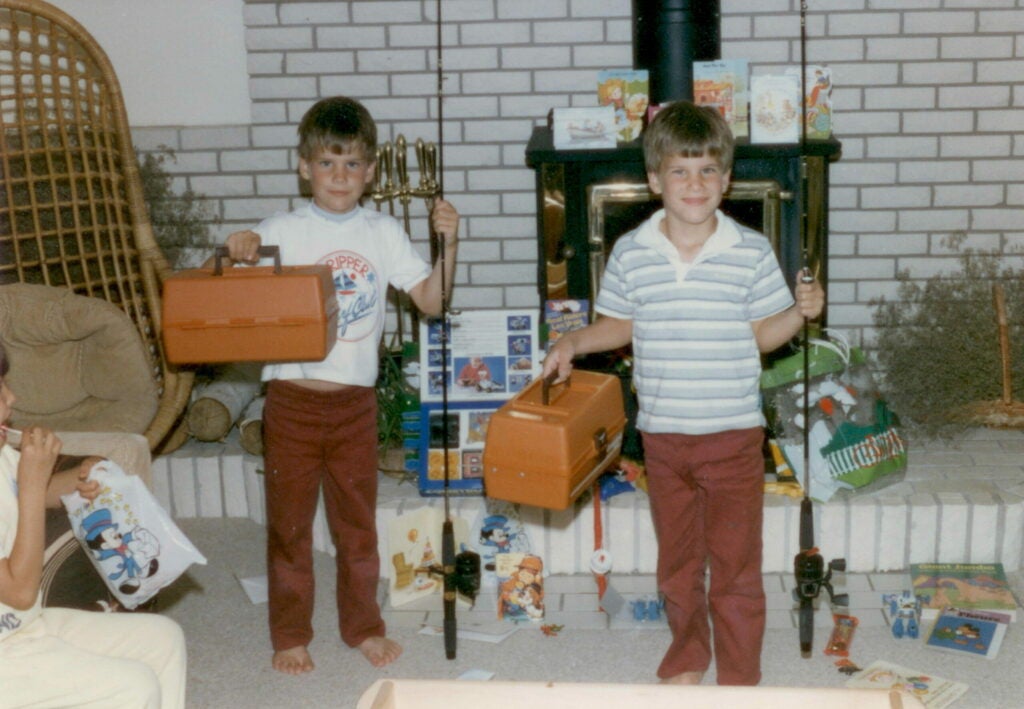 “The only thing we wanted for birthday presents was fishing stuff – so that’s what we got.” This picture is from the boys sixth birthday.

The best photos on the Internet of Sean Konrad’s 48-pound (!) rainbow trout, caught in Saskatchewan’s Diefenbaker Lake on September 5th.