If you’re looking to catch a giant brown trout in the White River, leave the little spinners at home. In... 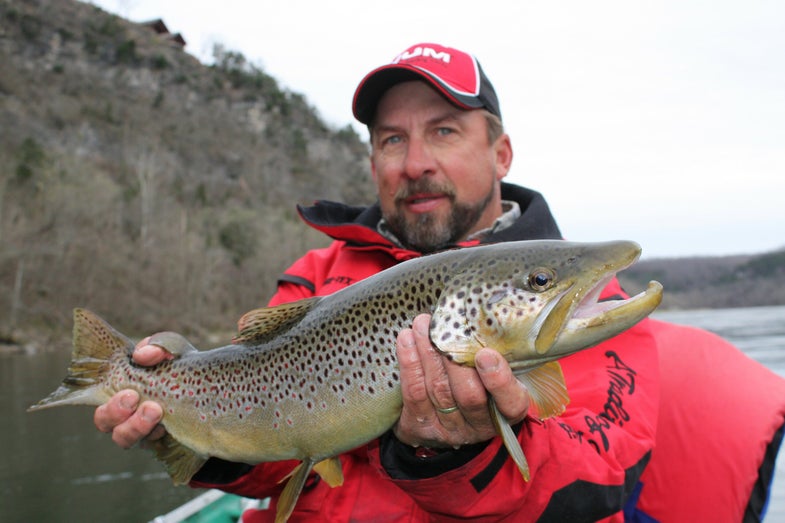 Frank Saska still gets inquisitive looks when folks see the jerkbaits tied to his lines, but not nearly as many as he once did. A long-time trout guide on Arkansas' White River, Saska helped pioneer the idea of casting them to get the attention of jumbo brown trout in the tailwater behind Bull Shoals Dam. Today the tactic is fairly well known, and when the turbines are turning during the spring, jerking and pausing big plugs is a common way to hook up with oversized brown trout. My 10-year-old son Nathaniel and I recently spent a few days throwing jerkbaits with Saska. The first thing we learned was that water level matters. One way to measure this is to ccount the number of turbines running. Standard wisdom says that if three or four turbines are turning (the dam has eight), conditions are right for jerkbait fishing. In Saska's mind, though, the more water the better. Really high water severely limits the places fish can feed efficiently, and that makes them very predictable. Boat positioning is more challenging in such conditions, and casts must be precise when the water is really ripping, but that's when Saska often locks horns with his biggest browns. He likes big suspending baits and fishes them with erratic jerks and long pauses that keep the bait in the strike zone. The fish in this picture slammed a Smithwick Rogue that Saska hadn't moved for three or four seconds. He had gotten the bait 6 or 7 feet down with a couple hard jerks and was letting it dead drift over a break. Jeff Samsel
SHARE

If you’re looking to catch a giant brown trout in the White River, leave the little spinners at home. In this tailwater, it’s all about big lures and serious boat handling. Jeff Samsel reports on learning the ropes of this late winter fishery.

And if you want to test your might against some White River browns, whether with big plugs, bait or flies, visit gastons.com or call (870) 431-5202