Chicks With Guns: New Photo Book Profiles Female Shooters From Across the U.S. 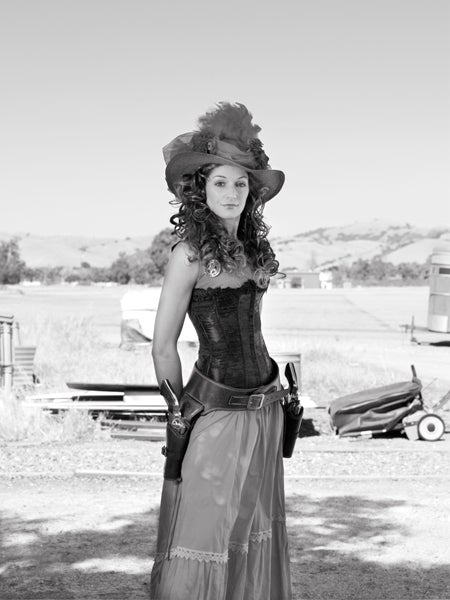 With a title like Chicks With Guns, Lindsay McCrum's new book is bound to turn some heads. When an advanced copy landed on my desk, I thought, this could go either way: It could be great, or it could be wildly inappropriate. I don't bristle at the word "chicks," but some women do. The cover (below) shows a young woman seated demurely on an oriental rug in front of a full-body mount of a bedded stag, a 19th-century English Forsyth pistol near her side and four antique guns on the wall behind her. I opened this sizeable hardcover to one of the 80 photographic plates, and started going through the glossy pages, at first only noticing the striking beauty of the full-page photographs and the women who were the subjects. I found myself wondering if they were just models holding guns as props, until I began to read the personal statements on each adjacent page. Written in the women's own words, it seemed to me that their stories read like something from the pages of Field & Stream, and I wanted to know more. Photographer Lindsay McCrum trained as a painter in oils, attending Yale University and the San Francisco Art Institute, and switched exclusively to portrait photography in 2003. Her other photographic works also explore elements of contemporary culture and gender: Superheroes and Commandos is a study of boys and costumed play, while Dress Up examines young girls and notions of fashion and beauty. McCrum called me from San Francisco, where she resides when she's not in New York, to discuss Chicks With Guns. McCrum stumbled onto the subject for her book quite accidentally. While working on another project in Montana on Labor Day in 2006, she photographed some women from a Single Action Shooting Society chapter in costume with their firearms, and it planted the seed for Chicks With Guns. She tells the story... Belinda from Watsonville, California, with a pair of Ruger Vaqueros in .45 Long Colt, was one of the first women in the book to be photographed..
SHARE

Field & Stream’s Kristyn Brady talks to photographer Lindsay McCrum about her new book, Chicks With Guns_. Filled with compelling photos of women with the firearms they use for hunting, competition, protection, and sport, McCrum’s book also relates their personal stories.