Rifle Review: Is The Shootrite Katana AR a One-and-Only Gun? 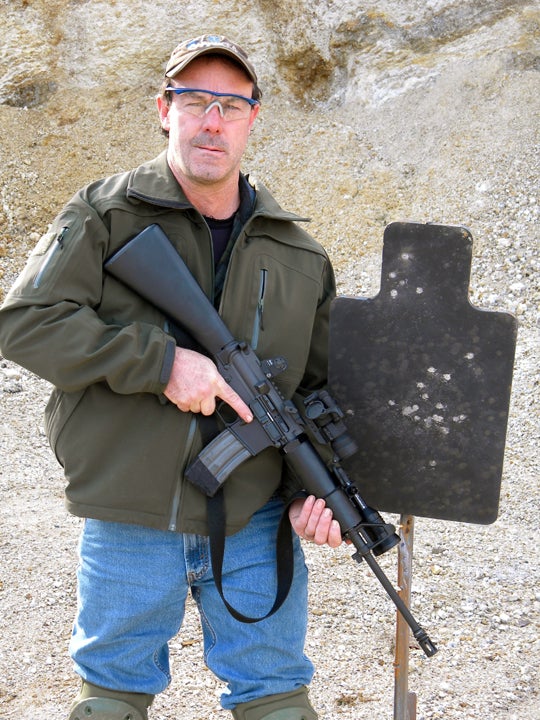 If you could have only one gun, what would it be? The very first sentence of Colonel Jeff Cooper's extraordinary book, The Art of the Rifle, reads: "Personal weapons are what raised mankind out of the mud, and the rifle is the queen of personal weapons." After a bit of further eloquence on the use of power, Cooper offers this: "The rifle is a weapon. Let there be no mistake about that. It is a tool of power, and thus dependent completely upon the moral stature of its user. It is equally useful in securing meat for the table, destroying group enemies on the battlefield, and resisting tyranny…" On matters pertaining to weaponry, I agree with Col. Cooper. I answered my "one gun" question in 1993, when I bought my first AR-15, a Colt Sporter, .223 with a 20-inch heavy, match-grade barrel, and began spending every last dollar I had on ammo to run through it. I've never been big on wishing for Armageddon (well, maybe for a little while, when I was 18 or so, watching the movie Red Dawn with a gang of friends) but I love to read history, and one of the key lessons I've come away with from my reading is that it's a lot better to be armed than to be unarmed. And armed, to me, has come to mean ARs: lightweight ammo and rifle, reasonably accurate far and near, capable of killing your deer, defending your castle, or having a fighting chance against the possible steamroller-driving malefactors of unfolding history. Col. Cooper would insist on his Steyr Scout rifle for these tasks, and a wild gaggle of other experts would insist on their choice, but that is what it is--a choice--and I choose the AR-15 platform, the simpler the better. Although I'm still shooting my Sporter, the world around my rifle has changed considerably. What we have witnessed is a kind of oceanic move by humanity into deeper and deeper levels of complexity in every facet of life. For some folks, this is highly rewarding--an app for everything, a GPS breadcrumb line to your bed each night. Caught somewhere in the yawn between the Luddites and the techno-geeks, I'm still seeking simplicity, in rifles and in life. Luckily for me, my old friend Tiger McKee who founded Shootrite Firearms Academy in Langston, Alabama, has been involved in the same search. Unlike me, he actually has the expertise to produce what he could not find. On a visit to Shootrite last summer, I got to shoot Tiger's new Katana rifle, a stripped down, hyper-efficient little AR-15, that McKee originally built just for himself. I take into account that I am prejudiced--Tiger and I have been friends for more than 30 years, and I was even an early guinea pig for some of the courses at Shootrite. That being said, after running a few thousand rounds through Tiger's rifle, I still choose the Katana as the answer to my personal "only have one gun" question.
SHARE
Rifles
Cabelas
reviews
Rifle Reviews