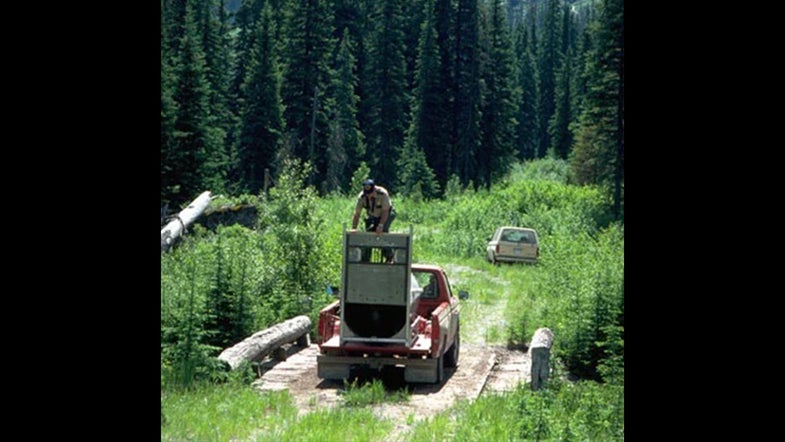 Editor’s Note: Most of the stories in our F&S Classics series are longer narratives of hunting and fishing adventures. But sometimes, a great photograph—or, in today’s case, several photos—is all you need to tell a great story. This web feature was first published in January 2008.

In 1987, the Montana Department of Fish & Game attempted to relocate an adult male grizzly bear that had been trapped alive after allegedly killing a cow on an Indian reservation near Kalispell, Montana. The bear was tranquilized, fitted with a radio collar and some ear tags, and the trap was put into the bed of a pickup truck and driven deep into the nearby Bob Marshall Wilderness, where the bear was to be released.

Photographer Richard P. Smith accompanied Department employees, including state game warden Lou Kis, on the release, in order to document the event with his camera. Such releases are fairly common, and in all previous instances the bears being relocated had run away as soon as they were let out of their traps. But this time something went wrong. Click through the slides at left to see what happened.

If you’d like to see more photos from Smith, or learn about the books he’s written about deer and bear hunting, visit his website.

As Montana state game warden Lou Kis began lifting the door to the trap to let the bear free, Photographer Richard P. Smith started shooting with a fresh roll of film from the back of another pickup located about 50 yards away. “I programmed myself to continue holding shutter down to capture whatever action took place,” said Smith.