Montana native Maxx Martel found this 1858 muzzleloading rifle packed in bear grease in the hollow of a tree. How... 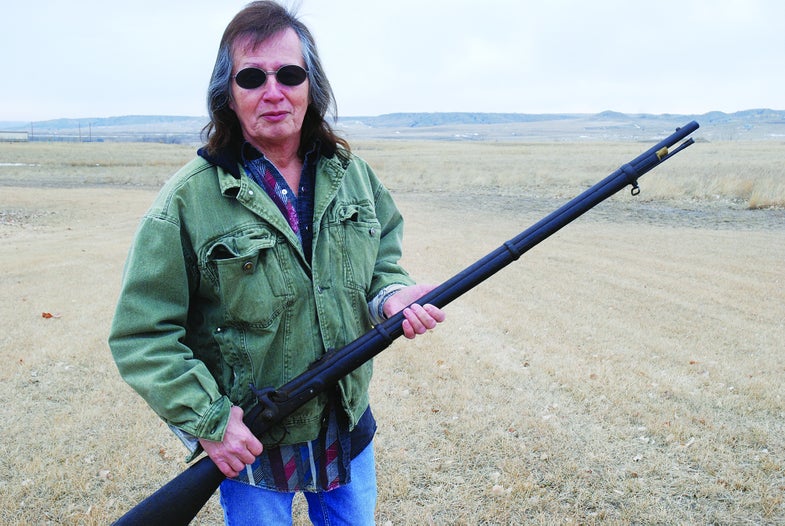 Maxx Martel, from Glendive, Montana, is known as a man who finds things. "When I'm out, I look around everywhere. Just yesterday, I found a .45-70 bullet, and an 1857 penny, the kind with an eagle on it." Martel's country is the wide open grasslands and huge cottonwood bottoms of the Yellowstone River. He was born there, a descendant of the Assiniboine and Oglala people that have called it home for centuries. The place is dense with stories of raids and fights, fur trappers and voyagers. Martel began his life as a finder in 1996, "just trying to find arrowheads," he said. In 2000, that search led him to discover an entire battle site, the Battle of Whoop-Up Creek, where Sitting Bull and his chiefs led 400 warriors against the 22nd Infantry of Lt. Colonel Elwell C. Otis. Now recognized by historians, the site near Glendive had been forgotten for over 130 years. Two years ago, Martel found an old shotgun while using a metal detector along the river. "Both hammers were missing, and the stock was worn, but in pretty good condition," he said. "They told me it was a Parker, made sometime before 1874." But he had never found anything like what he encountered a couple of weeks ago. "I was walking in the riverbottom, just looking around," he said. "I saw part of the butt of the rifle sticking out of a tree, up off the ground.". Amanda Breitbach, Glendive Ranger Review
SHARE

Montana native Maxx Martel found this 1858 muzzleloading rifle packed in bear grease in the hollow of a tree. How did it get there? Read the story here.