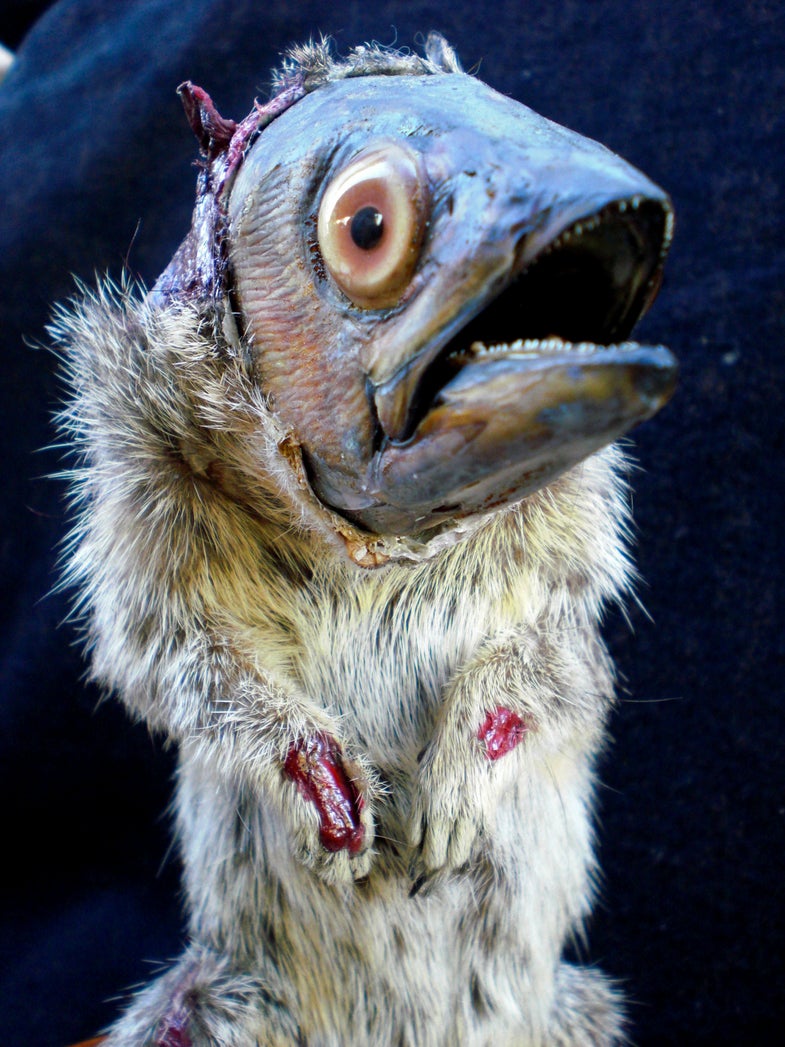 Besides preserving wild animals as hunting trophies and museum exhibits, taxidermy has another face that lies in sideshow monsters and hoaxes, like P. T. Barnum's famed "Feejee mermaid" of the 1840s. Assembled from the parts of assorted animals, such literally incredible creatures were called "gaffs" because they served to hook the public to "come on in" to see what was on the inside of the carnival tent. These days the concept of the gaff has been turned into an art form, "rogue taxidermy," a term coined in 2004 by the founders of the Minnesota Association of Rogue Taxidermists (MART). Pieces of art like these inevitably raise questions about the meaning of taxidermy. Hunters view a mounted head as a memorial and an honor to an animal they ethically hunted and to the hunt itself, and some hunters may be offended by the way these mounted heads in this gallery have been manipulated and altered. But while many of the rogue taxidermists see the mounts they do as simply works of art, or perhaps visual humor, there are others who solemnly view them as critical comments on hunting, the relationships of humans and animals, and what they consider animal cruelty--a co-founder of MART declined to be in this gallery; and it would be fair to assume it was because of a dislike of hunting. This a gallery of rogue taxidermy ranges from the bizarre to the horrible to the fantastic. It may make you laugh; it may make you cry; it may make you just plain angry. But the show's about to start on the inside, so come on in. Happy Halloween. "Fish in a Squirrel Suit (Url)"--Photo courtesy of Morgan Fields (C) 2009, myspace.com/slightlycurioustaxidermy, info@slightlycurious.com.
SHARE
Bass Fishing
Big Game Hunting
Bird Hunting
Bowhunting
Deer Hunting