F&S Classics: Grizzly Bear Chases Down a Bison on a Road in Yellowstone Park

Nearly 12 years ago, an amateur photographer accidentally captured an epic series of photos of a grizzly in hot pursuit of a bison 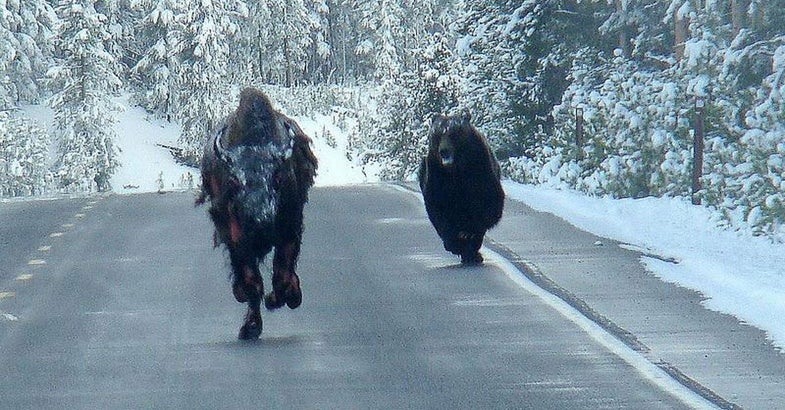 Alex Wypyszinski isn't a professional photographer. He took up the hobby after he and his wife of 41 years, Maryellen, began living and working in Yellowstone National Park each summer eight years ago. Alex Wypyszinsk
SHARE

Alex Wypyszinski, a retired professor and amateur photographer, shot this amazing series of photos of a grizzly bear chasing down an injured bison when he stopped to take photos of geysers in Yellowstone National Park in May of 2010. We got the story from the man behind the camera, who works at a post office in the park during the summers.

On May 24, luck and a bit of photographic intuition earned Wypyszinski this series of photos depicting something most people never get to see first hand: a grizzly bear barreling full-speed after a bison.

The fact that the chase took place on the Grand Loop Highway, one of the park’s few such roads that run between the Lower Geyser Basin and the entrance to the Firehole Lake Loop, gives the photos an almost post-apocalyptic feel, like watching herds of deer run through a decimated and deserted New York City in I Am Legend. But this isn’t a movie, this isn’t a city, and there are no special effects. Just the wild of Yellowstone overflowing onto a road through the park.

“That’s one of my favorite drives every morning and I stopped in the middle of the road to take a picture of the geysers off on the other end of a big meadow, and then I heard the animals before I saw them,” says Wypyszinski, who has seen and photographed plenty of bears in Yellowstone over the years. “At first I had a hard time figuring out what they were. I figured it was a couple of moose, possibly.

“Pretty quickly it became apparent what it was, though it took a while for it to register with that animal as badly injured as it was,” he adds. As the bison drew closer with the bear right on his tail, Wypyszinski noticed large patches of fur missing from the buffalo’s front legs.

“At first…I figured that the bear had already gotten started on him, but it became apparent from the head that it had been badly burned and that was confirmed when I showed the pictures to some interpretive rangers at the Old Faithful Visitor’s Center,” Wypyszinski says. “That’s the only thing that could have done that much damage to the animal. It probably fell into a pool.” The area has a high level of thermal activity with many boiling pools and steaming geysers.

Wypyszinski says he began to get nervous and considered moving to the roof of his SUV as the animals closed the quarter-mile distance between them. “But they were running so fast, as they went by me, I jumped back into the car. They had to have been going 25 miles an hour; it was astounding how fast they were going. I could have touched both of them [when they passed].”

“To be truthful, I was thinking, Maybe I’m having some kind of hallucination or something, because I had never seen anything like that.” Once both animals reached the tree line on the side of the road, the bison continued left into the Lower Geyser Basin and the bear broke right into the Firehole Lake area.

Wypyszinski says he was told the injured bison was seen the next day and that it was later put down by park rangers because of the extent of its injuries, a common occurrence as many animals are injured by vehicles in the park. “There are a lot of animals injured by automobiles in the park and there are some designated areas where they take the dead so they can be scavenged. It’s not like they put it in a landfill. They put them in the backcountry and let the ravens and the magpies and the other bears, I suppose, have first dibs.”

The amateur photographer, who is a retired professor from Rutgers University in New Jersey, works in the contract post office at Old Faithful in the park and said the photos were simply a case of being in the right place at the right time, and that he usually prefers to shoot still-life and landscapes. “May and early June are probably the best time to get bear shots there. They’re coming out of hibernation and feeding down in the lower areas where there’s food. The entire plateaus are still snowed in, so you get to see quite a few of them in May, which is my favorite month there because it’s before the tourists arrive.”

“I always tell everyone, ‘You have to get up early. If you want good photos, watch the sun come up in Yellowstone.’ I like to take pictures of flowers more than animals so I’m always looking for that dynamic light. That happens right in that area. That whole meadow basin runs right down into the Firehole River and it runs east-west so the sun comes up over the central plateau and it’s a neat place to be early in the morning at any time of the year. “On this one, I was especially lucky.”

Something that makes these photos even more remarkable is that Wypyszinski didn’t use a high-end camera and lens to shoot the series. “It was just a (digital) point-and-shoot, but it had a 15x zoom lens on it. The professionals are always out there with their 800mm lenses and run around in a group when they hear about something like this.”

The retired professor said he’s surprised at all the attention his six-month-old photos received recently after a local TV station did a story on them, which in turn drew coverage from a local newspaper. The story snowballed after that and the photos went viral on the web.

After taking the shots, he posted them in the post office where he works and received a steady amount of interest through the summer. “I’m astounded that this all happened. By the end of the summer, I hadn’t even thought about it anymore. It was just another good picture.”

Wypyszinski said he isn’t a fisherman or hunter, preferring to be behind a lens instead, but enjoys eating wild game and is friends with many hunters.

For now, he says he will enjoy his moment of fame. “It’s puzzling to tell you the truth and I realize that it’s only momentary, so I’m enjoying it while I can. My grandkids are the most impressed.”

This story was originally published in 2010.