All photos courtesy of Fox News Channel _All eyes are on the swollen Mississippi River as historic flooding continues to... 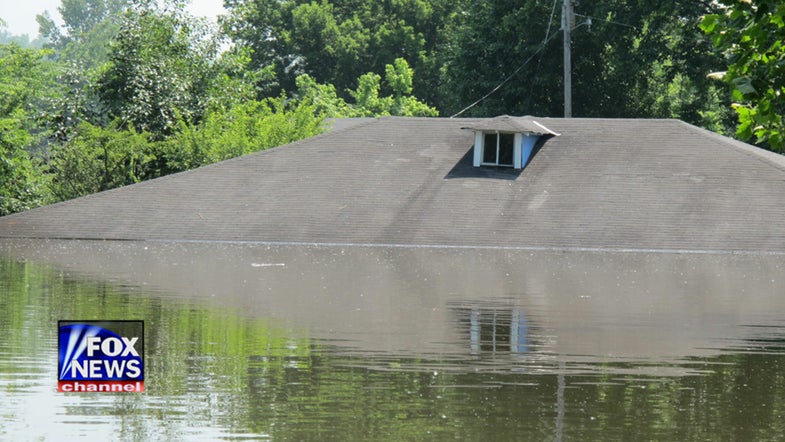 F&S: So what are the factors that made this year's flooding so historic? Reichmuth: "This is the result of a sort of perfect storm of conditions for flooding. First, we had record-breaking snow in many parts of the north, northeasr and upper Midwest. All that snow must eventually melt. That in itself would be enough to cause flooding, but when you combine that with two major, slow-moving storm systems that gave some areas 15 to 25 inches of rain, then all that water has to go somewhere. The result is something we've never seen before.".
SHARE

_All eyes are on the swollen Mississippi River as historic flooding continues to uproot lives, destroy crops and inundate entire communities while adversely affecting fish, wildlife and perhaps even the course of the mighty river itself.

F&S Field Notes blogger, Chad Love, interviewed Fox News Chief Meteorologist Rick Reichmuth, who has been covering the disaster, for his first-hand perspective on the flooding, the status of those on-the-brink levees, the fate of local wildlife, how long will it last and what people can do – if anything – to prepare for disasters of this magnitude.

Reichmuth has been covering the floods continuously from points all along the river, and he’s seen firsthand the devastation they’ve wrought, from the displacement of hordes of citizens to the destruction of thousands of homes, businesses, livelihoods and towns. Reichmuth, who spoke to Chad by phone from Fox News headquarters in New York, just recently returned from the field but as the floodwaters head inexorably south, he’s gearing up to head out once again._