Hunting With the Quail Doctor 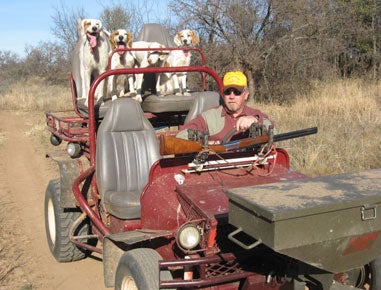 Even in one of its last strongholds on the rolling plains of northwest Texas, the bobwhite quail fights a battle against habitat loss. Quail populations decline an estimated 3% a year and Dr. Dale Rollins makes it his life's work to sound the alarm. Rollins, an Extension wildlife specialist for Texas A&M University and a finalist in Field & Stream's 2008 Heroes of Conservation program, works with landowners to improve habitat. He's run "Bobwhite Brigade" youth camps since 1993, and for the last two years he has been able to study birds on the new 4700 acre Rolling Plains Quail Research Ranch (RPQRR) near Roby, Texas. Recently, I got to tour the ranch. Phil Bourjaily
SHARE
Bird Hunting