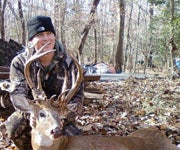 _Mark Hahr could not believe his eyes when he walked up to the big whitetail he’d put to the ground just minutes into his first Maryland gun hunt. Expecting to get his hands on the tall, gnarly rack he’d spotted just after daybreak in his scope, Hahr instead saw a curious sight: A raw, bloody spot where the left antler should be. Thinking he’d shot the antler off, he quickly scanned the buck.

The entry wound was right where he’d put the crosshairs, just behind the buck’s shoulder. His bullet didn’t separate the antler from the deer’s skull, so what did?_