Give Me a Break! Fishing Editor John Merwin Tortures Seven Rods Until They Snap 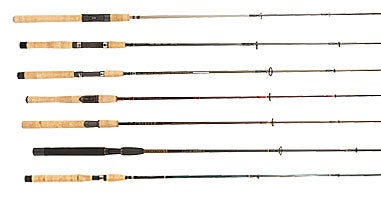 The Rods
So no fishing rod manufacturer would have a chance to surreptitiously soup up a test version, I picked out my "victims-¿ from retail outlets, paying between $28 and $80 for the kinds of midpriced models most people use most of the time. All were 6 or 6¿¿ feet long and one piece, so I didn't have to deal with ferrule-strength issues. To make the group comparable according to factory specs, I chose medium- to heavy-power rods, the kind commonly used in largemouth bass fishing, rated for lines testing to as much as 17 or 20 pounds. The Results
The breaking points of supposedly comparable rods varied widely, from a low of 22.4 pounds to a high of 44.6 pounds. The one rod that I was unable to send to a premature death-"a Shakespeare Ugly Stik-"carried an incredible 55-pound load without snapping (I ran out of weights at that point and gave up). Notably, strength was not related to suggested retail price; the Ugly Stik was the least expensive fishing rod I tested. Varied test results aside, these are (or were) all perfectly good fishing rods. For one thing, any monofilament line commonly used with any of them would break long before the rod did, and it's even more likely that the hooks would either straighten out or pull free from a big fish. And strength isn't the only consideration when you're choosing a rod; other attributes such as overall weight and action are important, too (a broomstick would likely have been stronger than any rod I tested). Mostly, I was surprised by the loads all of these rods could carry. I had expected much less. But I now know the type of stress I can put to bear in certain angling situations, such as fighting a trophy gamefish or hauling back hard to get free of a snag. Spencer Jones
SHARE
Bass Fishing
Fishing
Fishing Gear
Fly Fishing
Fly Fishing Gear