A Sportsman’s Life: The Collected Columns of Bill Heavey 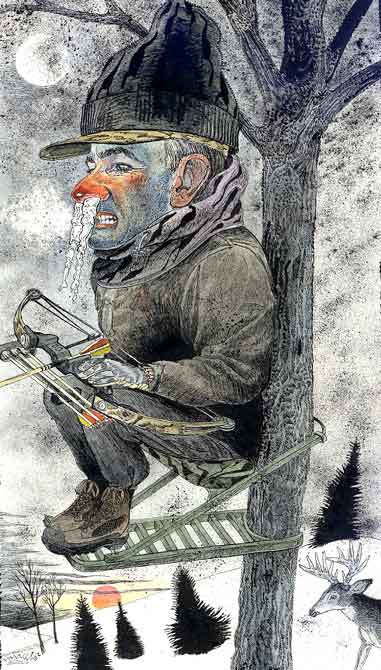 The Late, Late Show
There's a fine line between dedicated and unhinged.
February, 2003 Late January, 12 degrees and falling, the northwest wind hurrying a red sun toward its slot in the horizon. Seated in a gently rocking tree stand 70 yards back from a field of winter wheat, I am exploring that fine line between hunting really hard and suicide by hypothermia. A hunter may take either a buck or doe during the late bow season in my state, and any guy with half a brain should be happy with either by this point in the game. Me, I'm holding out for a buck, a good one. Might as well go down swinging. In a feeble attempt to stave off the cold, I've shoved hand warmers inside my gloves and toe warmers into my boots. I've been trying to ignore the shivers by reading the plastic wrappers they come in. These marvels of modern technology consist of stuff that has been around since the wheel: iron, water, activated carbon, and salt. In French, the other language on the wrapper, this is translated as fer, eau, carbone active, et sel. Nevertheless, the package contains more warnings than a new chain saw. The warmers are not to be applied directly to bare skin, desensitized skin, on the instep (cou-de-pied), ankle (la cheville), or arch (l'arche du pied). Do not use them when sleeping. Children, the elderly, and some disabled people should be supervised when using the product. Don't put them on frostbite. Don't puncture them. If you do, resist the temptation to place the contents in your eyes or mouth. Don't swallow them. If you do, consult a physician. Fast. In direct violation of the safety instructions I have duct-taped a fifth and larger warmer directly against my skull beneath two hats. I have been doing this for years, no doubt slowly cooking my brain. This explains why I'm (a) bowhunting in late January, and (b) holding out for a decent buck. The strange fact is that I like the late season, cold and all. I like it because the smart hunters-"those smug guys diligent enough to scout the preseason and disciplined enough to avoid overhunting prime stands-"have tagged out. That leaves the woods to guys like me: the obsessed, the unhinged, the ones who don't know when to quit. There is a strange satisfaction in this kind of hunting. If you get a deer, the victory is that much sweeter. If not, it damn sure wasn't for lack of trying. At 5:22, i spot a doe 100 yards out as she picks her way toward the field. As long as she's moving, I can see her. The moment she stops, she disappears into the landscape. Despite years of seeing it, the trick still fascinates. At 5:34, I register a little 4-pointer in the distance. His unusually white antlers almost glow in the fading light. I don't want to shoot him; I want to warn him. I want to tell him to muddy those stickers up if he hopes to make it through another year. At 5:52, legal light ends, but something keeps me on stand, watching. Then he comes, the big shape ghosting in from upwind. It's too dark to read my watch, let alone count tines, but I know this is the one, know it as surely as if I were seeing him under a spotlight on an empty stage. I know it because my heart is booming and the heart does not lie on late January afternoons when it's 12 degrees out. The world stops as he passes soundlessly beneath my stand, as he enters the dark field to feed. Suddenly, for the first time all day, I notice that I'm warm all over. And a strange rapture courses through me, every molecule in my hunter's blood suddenly alive and singing. Field & Stream Online Editors
SHARE
Big Game Hunting
Deer Hunting
Whitetail Hunting