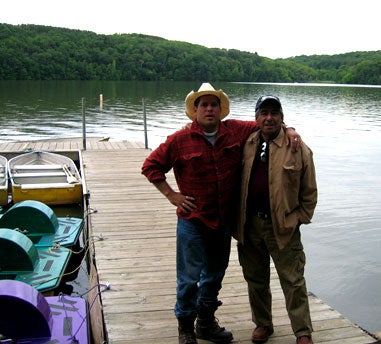 As told to Catherine DiBenedetto:
Editor's Note: This photo first came to our attention when it was sent in to our Game Faces contest. Ben Stamm, the guy who owns the boat rental place on Yellowstone Lake, had told us that there was a huge muskie out there. He had actually netted it while helping the DNR remove carp. You know, you hear stories like that all the time--some guy who saw a big monster fish that's still lurking in the lake--but no one really believes them. My best friend, Lou Benavides, was just two weeks out of brain surgery. One morning in late spring I had showed up at his house to pick him up to go fishing, but I had to rush him to the hospital instead. The doctors told us he had terminal cancer--a tumor growing on the part of the brain that controls speech and motor skills. Nonetheless, that Sunday, June 11, he wanted to get back on the water. We got up at four and drove about 25 minutes from my home outside Madison to the lake. It was a great day. We landed a 35-inch northern, and some catfish. By early afternoon we were ready to head home, but just before we left, we decided to throw out a line at the spot Ben had told us about. Field & Stream Online Editors
SHARE 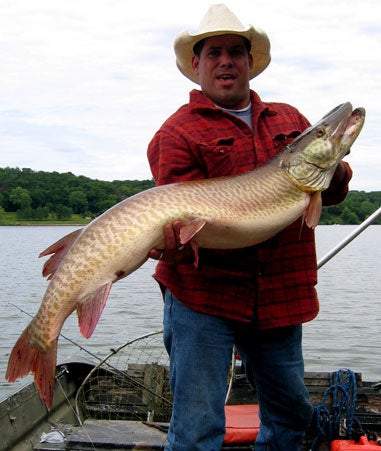 We nicknamed the fish Shamu because she put on an incredible show. First, she leapt completely out of the water, just straight up, and looked at us–gills spread and mouth open–maybe 7 feet from the boat. She looked as big as we were. I’ve never seen a bigger mouth in my life. I didn’t think for a minute that we were going to get that fish in the boat. She did some kind of a figure eight, some Greg Louganis move, and then a strong tail thrash that soaked us. Since his surgery, Lou is not supposed to lift anything over 5 pounds–not even a milk jug–but he grabbed the net out of instinct and scooped up the fish, which had to be about 50 pounds. At 57 inches, she folded in the net like a taco. 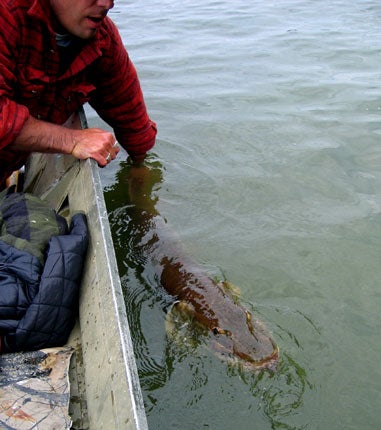 I never thought I could get that excited over a fish. On the ride home, Lou and I were talking back and forth like a couple of little girls, and we missed our turn and ended up in a town an hour away from home. We couldn’t count the number of places we’d been to fish in Canada and northern Wisconsin, plus all the money we’d spent there. And just 25 minutes from home, here’s this big girl laying up in Yellowstone Lake. 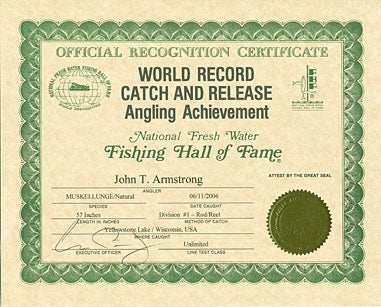 The National Fresh Water Fishing Hall of Fame certified the muskie as the Catch & Release World Record in the unlimited line test category. When we go back to the lake, you’d swear we were movie stars the way everyone wants to talk to us. My boss at Craftsman Builders, Chris Everson, also a big fisherman, has offered to pay for the replica! I’ve asked Joe Fittante of Fittante Replicas to make two, one for me and one for Lou. I can’t stop talking about that fish. The Hall of Fame sent me a “World Record Holder” patch, and I’ve been wearing it on my work shirt every day. At first it was funny, but now people just look at me and shake their heads. KEEP CLICKING TO SEE MORE GIANT MUSKIE FROM THE FRESHWATER FISHING HALL OF FAME! 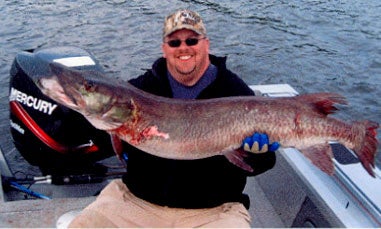 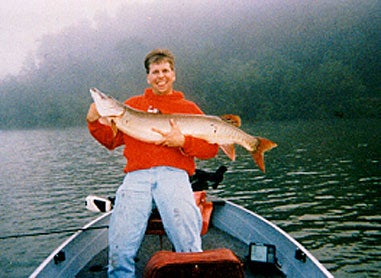 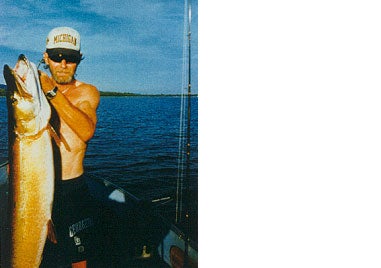 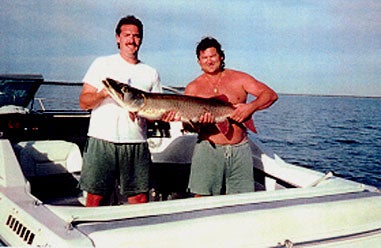 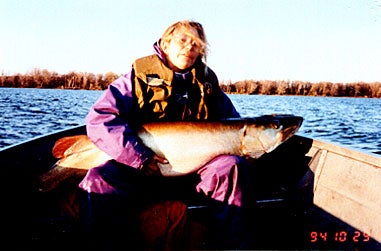 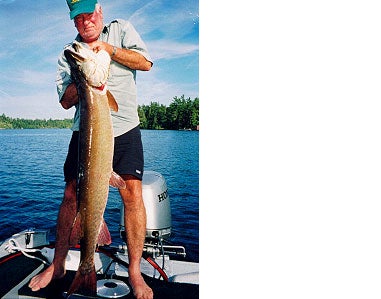