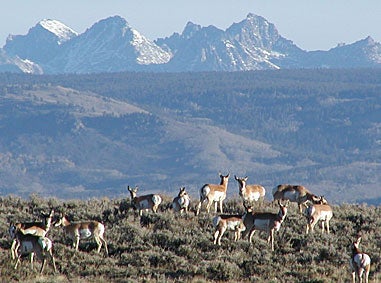 Researchers have discovered that the pronghorn in the Upper Green River (shown here above with the Wind River range in the background) make the second-longest migration of any big game animal left in North America. Now their entire migration corridor is being opened for energy development. By: Hal Herring.
Wyoming's Upper Green River Valley has for thousands of years been one of the continent's great hunting places. Ancient man pursued pronghorn antelope through a narrow place in the valley called the Bottleneck more than 6000 years ago. Those hunters left behind stone knives and pronghorn bones, carefully split to scoop out the fat-rich marrow. Mountain men in the early 1800's called that marrow "trapper's butter-¿ and chose this valley above all others in the West for their Green River Rendezvous, a festival of trade, fur, sin, and no-holds-barred fighting, held at what is now the tiny community of Daniel. The valley, and the mountain country surrounding it, is still a place where wildlife, freedom, and open spaces dominate. Most of it is public land, with world-class hunting, fishing, and camping available to all. In these modern times of population growth, decreasing hunting opportunities, and sprawling development, there may be no place left on earth that equals it. But in the past five years, the public lands here, like so many others in the American West, have become the site of a huge play by energy companies to extract natural gas. And the way those energy companies are doing this is changing the face of the valley on a scale never seen before. Linda Baker
SHARE
Big Game Hunting
Deer Hunting
Mule Deer Hunting
Wildlife Conservation
Mule Deer
record fish
Wyoming Hunting & Fishing