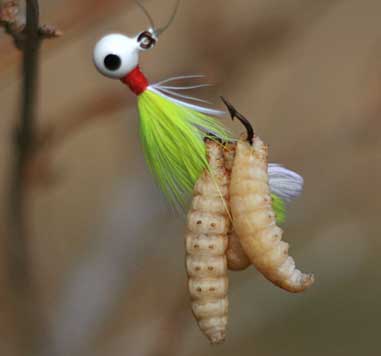 Three maggots on one Little Nipper Lyon thinks the maggots remind the steelies of shrimp they eat in Lake Michigan. But Jim Dexter, Lake Michigan Basin Coordinator for the Michigan DNR, says "No, I wouldn't go that route. Mysis (shrimp) are probably a small portion of their diet. It's probably more to do with their genetic wiring to eat bugs, and it would seem to me that a waxie looks like a nice big caddis larvae, or larvae of something!" Mark Tonello, a DNR Fisheries Biologist for central Lake Michigan, agrees. "Steelhead are just preprogrammed to eat bugs. Even out in Lake Michigan, at times insects comprise a large portion of their diet. And I would say that it is the waxworm they are keying in on much of the time. I have friends that fish waxworms on a bare hook and they catch fish that way as well.". Field & Stream Online Editors
SHARE 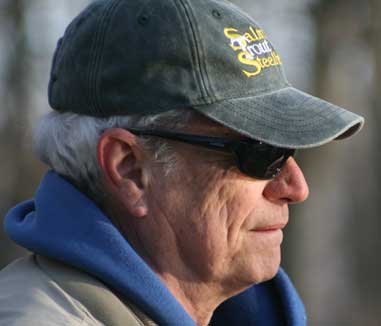 Rogue River steelhead guide Jim Lyon Story and photos by Bruce Matthews You don’t see maggots and steelhead in the same sentence, usually, unless it’s about fish carcasses, which who wants to talk about anyway? So when my friend Gwizdz tells me about this Rogue River guide who uses maggots to catch hundreds of steelies a year, I’m intrigued. The Grand Rapids, Michigan guide has fished the Rogue for 30 years and catches more fish than anyone, Gwizdz says. The real deal. So I call Jim up and set up a trip. Now I admit I suffer that peculiar affliction of fly fishers that won’t let us imagine a pristine steelhead eating maggots. Especially maggots draped on a hook. Warped as I am in this manner, I had to see this for myself. We meet a few weeks later at the McDonalds in Rockford at 7:00 a.m.. I get right to the point in asking him about his maggots. “Waxworms,” says Jim, who in my head by now is really Maggotman. “Waxworms. They’re not maggots.” Waxworms are caterpillar larvae, while maggots turn into flies. I used to think waxworms were baby bees, but I-¿ve since learned that they’re the larval form of the wax moth. Bee guys don’t like them because they’re parasitic to their bee colonies. Waxworms get used a lot in the pet industry, but they’re even more popular as bait. They come in colors, and glow in the dark. I am not making this up. You can also raise your own. Go here (www.waxwormkit.com) for the proof. Still, waxworms or not, they look like maggots, act like maggots, feel like maggots, move like maggots, taste like… just hold that thought. What was it my dad said—if it walks like a duck and quacks like a duck…. Waxworms hell. These babies are maggots. Lyon sighs. We head to the mouth where the Rogue dumps into the Grand, and find water. Lots of water. Snowmelt overspilling the Grand and backing into the Rogue. This is not good. Lyon says he caught 8 yesterday with a rookie sport, mostly here. But the water’s up a lot higher today. Icebergs are drifting where we want to fish. Big ones. This is not good. 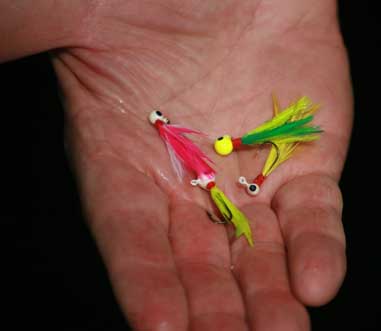 A selection of Lindy Little Joe’s Little Nipper jigs Rigging up, it looks pretty simple. A float, split shot, barrel swivel, leader and a tiny 1/64 ounce white-headed green jig like you’d use for panfish. Lyon says they’re Lindy Little Nipper Jigs. They don’t look like they’d hold a steelhead. They look like little crappie jigs. Lyon says wait and see. “Lindy Little Joe’s making them a little heftier since we started catching steelhead with them.” Watching me sideways he adds, “they’ll hold the bigger fish like these steelhead you came to see eat my maggots.” “Waxworms,” I say. “Put three on the hook,” Jim says. “Hook them though the head.” He’s tried using only one or two but they just don’t work as well. I put three on, hooked through their heads. Two chickadees watch from a nearby branch.

Three maggots on one Little Nipper Lyon thinks the maggots remind the steelies of shrimp they eat in Lake Michigan. But Jim Dexter, Lake Michigan Basin Coordinator for the Michigan DNR, says “No, I wouldn’t go that route. Mysis (shrimp) are probably a small portion of their diet. It’s probably more to do with their genetic wiring to eat bugs, and it would seem to me that a waxie looks like a nice big caddis larvae, or larvae of something!” Mark Tonello, a DNR Fisheries Biologist for central Lake Michigan, agrees. “Steelhead are just preprogrammed to eat bugs. Even out in Lake Michigan, at times insects comprise a large portion of their diet. And I would say that it is the waxworm they are keying in on much of the time. I have friends that fish waxworms on a bare hook and they catch fish that way as well.” 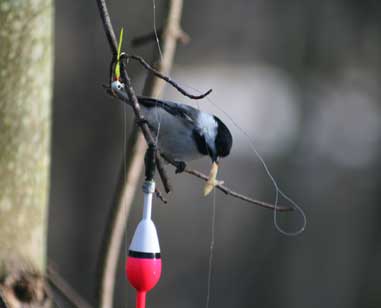 Chickadee maggot bandits infest the Rogue My first cast loops the rig on an overhead branch. Permanently. Chickadees flash to the wreckage. Lyon grins. “Those chickadees know about this fishing too,” he says, as the birds strip the waxworms from the tangled hook and fly to a nearby perch. “Won’t be the last time you see -Â¿em eat waxworms today!” “Maggots,” I say, just under my breath, and re-rig. Jim’s rig starts at the business end with a Little Nipper or similar jig as light as conditions allow. Lyon likes 1/64-ounce jigheads, but will go heavier in fast water. He ties the jig to 2.5 to 3 feet of 6- or 4-pound-test fluorocarbon mono, then attaches the mono to 8-pound-test Maxim or Sufix running line with a black size 10 or 12 barrel swivel. Lyon spaces some split shot along the leader (the spacing makes for easier casting and fewer tangles), then clips on a Thill or similar-quality float in sizes adjusted to conditions. The more weight he needs to keep the jig close to the bottom, the larger the float he uses. 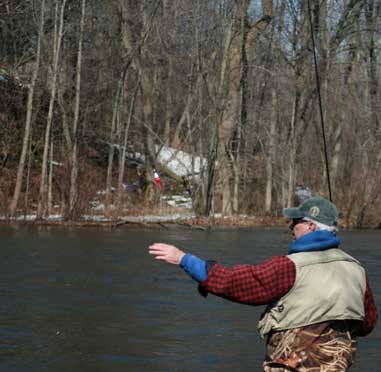 Lyon prepares to cast to the next seam in the current We drift the floats in the current, working them through prime steelhead lies–current edges, seams, alongside snags. Lyon fine-tunes the rigs to meet the conditions. He’s got it down to a science. There’s more to this than bobber fishing. “Four things I watch, all the time,” he says. “Cork size, jig size, weight, and the distance from cork to hook. Even switching from a 1/64 to 1/32 oz jig can make all the difference.” Lyon’s system calls for casting the rig across and/or slightly upstream so that it drifts through the seams likely to hold fish. After the cast, the rod is brought to 10 or 11 o’clock, following the float as it drifts. The bail on the reel is left open and line is allowed to spool off to prevent drag on the float, though Lyon keeps as much line off the water as possible to minimize slack. When the cork dips he flips the bail and lifts the rod, reeling quickly to take in any slack and keeping the hook tight to the fish. Jim is not particular about rod style. Anything long and supple seems to work. Today he’s using an Orvis fly rod as well as some G. Loomis spinning rods in 9- and 10-foot lengths, all matched with garden-variety spinning reels. The longer rods give him better control over his line as he lets it out for the drift. 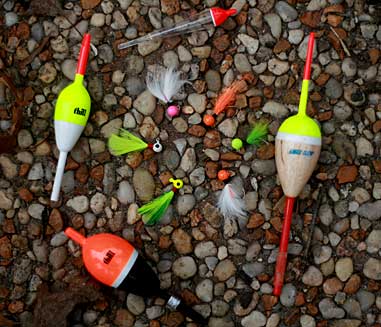 Thill floats and maggot-tipped jigs are deadly for steelhead on the Rogue The real trick to this technique, he says, is constantly adjusting your rig. “Got to get those waxworms right in front of the fish and keep them there as long as you can. It’s tough to do in these run-off conditions.” What about color? We’re fishing white jig heads with green hackle tails. Lyon likes green in various shades, but switches to pink, orange, or white to mix it up. “The jig attracts the fish,” he says, “the waxworm makes them eat it.” 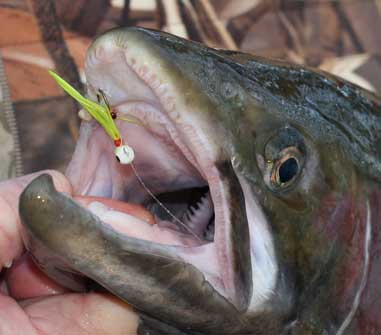 Steelhead season in Great Lakes generally peaks in November and December, then again in March and early April. And eat it he did, this 8-pound buck steelhead coming upstream from under a logjam. My cork dipped just as it swept past at the end of the drift. I slammed the reel into gear, the rod bent and the fish was on. And stayed on in spite of myself as the fish pretty much let me walk him upstream into the net. “Wait ’til the water warms up,” Lyon said. “He won’t be so easy to persuade when it gets to 40 degrees.” The hook is set well inside his upper jaw. No question about him inhaling it. Clearly, this fish wanted a maggot breakfast. We released him. Lyon looked back at the rising water. “Tough fishing today.” he said, reeling to miss an iceberg. 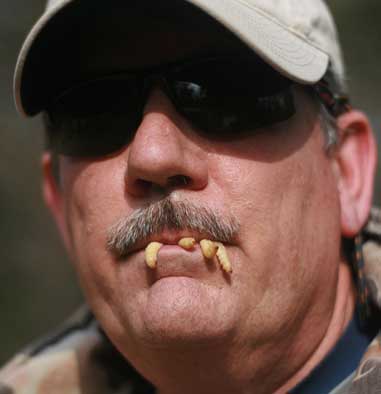 The author, thinking like a fish Lyon was right about the fishing. It was tough. We didn’t catch another steelhead the rest of the day, though we hooked up a few more times. “Thing is,” Jim said, “we’d never had that action, little as it was, if we weren’t fishing waxworms. You see anybody else doing anything at all?” ‘Anybody else’ meant all the other anglers we saw on the water. Even on a Tuesday, it was still prime steelhead time on the Rogue. Not surprisingly, Jim knew many of the anglers we met. Not one said they’d had even a hit. But Lyon–the Wizard of Maggotry–and his waxworm system made me a believer under the toughest conditions. Oh yeah. And what do they taste like? Chicken, man, they taste just like fried chicken.
Freshwater Fishing
Salmon & Steelhead Fishing