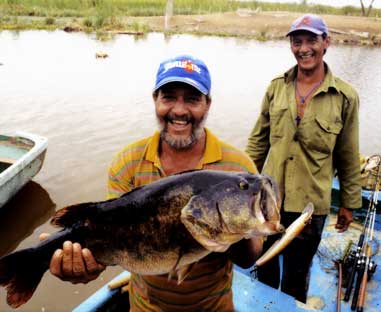 Embargo Bass: Rigoberto Rodriguez of Granma province with a largemouth that scaled 10 pounds 4 ounces even after more than two hours out of the water. I came to Cuba after hearing a number of things too interesting to ignore. One is that there are serious bass anglers and some big fish down here. The other is that the national tournament is almost exactly like the Bassmaster Classic except for a few details. Instead of having $50,000 rocket sleds, the anglers fish from rowboats. All fishing is catch-and-kill. (Protein is relatively hard to come by in Cuba, and the idea of returning it to the water has not even gotten off the ground yet. The fish go to either the anglers themselves or the Cuban Federation of Sport Fishing folks who work the competition.) And instead of the winner's getting half a million bucks-"and many times that in endorsements and appearance fees-"the top angler and team take home nothing more than a rinky-dink plastic trophy and bragging rights to being the best bass fishermen in the country. I am more than a bit nervous on the 500-mile drive across a good chunk of the country from Havana to Bayamo. The guys I'm going to meet are fellow bass anglers, of course. But they are also Cuban. I, on the other hand, am a citizen of El Empirio-"as they refer to their northern neighbor-"the most powerful country on earth. As we enter the city and my anxiety about meeting the 32 anglers competing in the Cuban national bass tournament rises, I tell my guide and translator, Samuel Yera, to stop at a gas station so I can arm myself with the one thing that bridges all socioeconomic barriers-"beer. Samuel is a three-time tournament winner who failed to qualify this year because he spent too much time guiding saltwater clients for tarpon (which is why he is available to guide and translate for me). Ready with packs of cold Bucanero Fuerte, we park at the government dormitory by the local baseball stadium and head upstairs, guided by the sound of men's voices spilling out of an open door. Peter Beste
SHARE
Bass Fishing
Freshwater Fishing