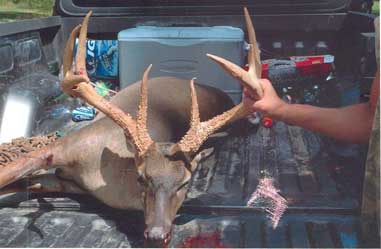 By T. Edward Nickens The buck is an absolute bruiser: gray-muzzled and heavily muscled, with a battle-broken brow tine on its wide, 11-point rack. It steps into the clearing with a stiff-legged gait meant to intimidate and fluster the 8-pointer that's hooked up with a doe. At this point, any deer hunter who hasn't fallen asleep or died on stand would slip off the safety on his rifle. Instead, James Meadows, who's in a wooden box blind 80 yards away, has work to do. First Meadows reaches down to power up a camcorder that has its lens aimed straight down the shooting lane. Next, he brings up a .270 bolt action and looks through the huge Zeiss 3x12 riflescope. His breath raspy, Meadows forces his gaze away from the headgear and studies the buck's body with coroner's detachment. He looks for a certain sag in the belly. A particular shape of muzzle. An indistinct juncture between the animal's neck and chest. After all, Meadows is a member of South Carolina's Oakland Hunting Club, and pulling the trigger on a deer rifle is an answer to a question he has agreed to take very seriously. Field & Stream Online Editors
SHARE
Big Game Hunting
Deer Hunting
Whitetail Hunting