Bull elk during the fall rut are one of my favorite subjects. There are few better things than the sight... 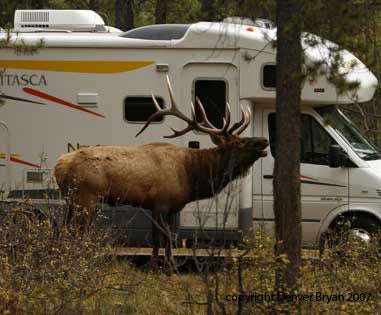 This particular elk was attending a harem of cows hanging out in a campground in Jasper National Park. He spent several nights bugling and keeping campers awake. It wasn't uncommon for the bull to walk within a few yards of RV's and pitched tents in the campground. Field & Stream Online Editors
SHARE

Bull elk during the fall rut are one of my favorite subjects. There are few better things than the sight of a one bugling on the far side of an aspen grove on an early autumn morning.

But such photography is not all fun and games. Most photography of bull elk in rut occurs during the month of September in either Yellowstone National Park or Canada’s Banff and Jasper National Parks. Both locations support good elk populations that are protected from hunting and see great numbers of people. As a result, such elk become largely unafraid of humans. This allows the public to view and photograph them in closer proximity than would normally occur outside of park-protected environments.

National Park regulations generally call for people to keep a minimum of 25 meters between themselves and most wildlife, including elk. This regulation exists to insure that elk remain relatively undisturbed, and that people remain relatively safe. Unfortunately, there’s always a number of people who are either unaware of or choose to ignore this minimum-distance regulation. Most problems that occur between the public and elk usually come about when tourists try to get too close, to get a better snapshot with their snapshot cameras. More often than not a dominant bull elk attending to his harem of cows will false charge anyone who gets too close and send them scurrying for the protection of the nearest tree, car or structure. However, on rare occasion bulls don’t false charge and people are injured.

Click through the slides view photos of human-elk encounters, including a series in which a bull elk charges an unwary tourist.