Seven Ways to Light a Fire Without a Match

FRICTION-BASED FIRE MAKING Rubbing two sticks together is likely the oldest of all ­fire-starting techniques, and also the most difficult. … Continued 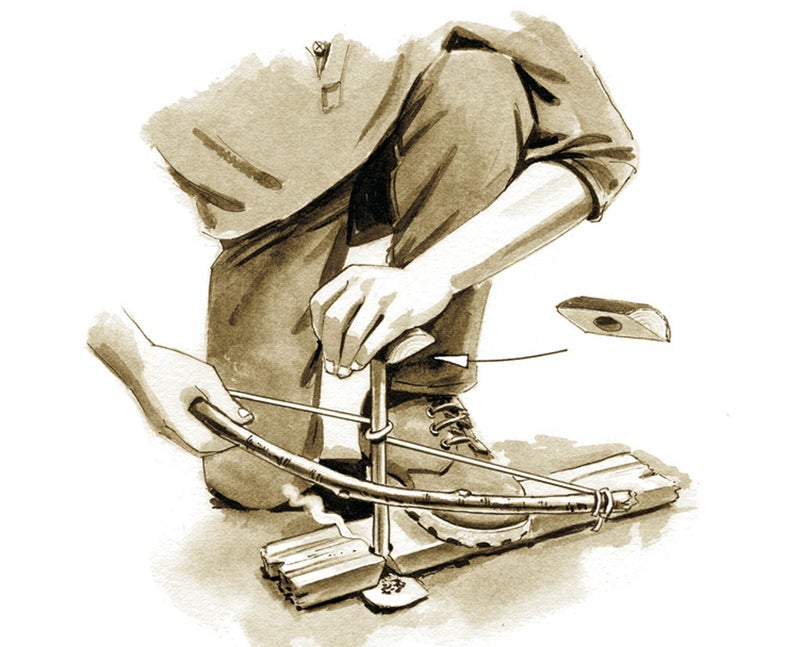 A tried-and-true method of starting an ember, the bow-drill fire starter uses a loosely-strung length of cord to deliver a steady rate of friction. Steve Sanford
SHARE

Rubbing two sticks together is likely the oldest of all ­fire-starting techniques, and also the most difficult. Besides proper technique, you have to choose the right wood for the fireboard and spindle. Sets made from dry softwoods, including aspen, willow, cottonwood, and juniper, are preferred, although a spindle made from a slightly harder wood, combined with a softer fireboard, can also work. The friction of the spindle against an indentation in the fireboard grinds particles from both surfaces, which must heat to 800 degrees F before a glowing coal forms. This must then be transferred to tinder and ­gently blown to life.

Using a hand drill is one of the simplest friction methods, but high speed can be difficult to maintain because only the hands are used to rotate the spindle. It works best in dry climates.

Step One: Cut a V-shaped notch in the fireboard, then start a small depression adjacent to it with a rock or knife tip. Set a piece of bark underneath the notch to catch the ember.

Step Two: Place the spindle, which should be 2 feet long, in the depression and, maintaining pressure, roll it between the palms of your hands, running them quickly down the spindle in a burst of speed. Repeat until the spindle tip glows red and an ember is formed.

Step Three: Tap the fireboard to deposit the ember onto the bark, then transfer it to a tinder bundle, and blow it to flame.

Two people can do a better job of maintaining the speed and pressure needed to ­create an ember using this string variation of a ­friction drill.

Step One: Have one person apply downward pressure to the drill while the other uses a thong or shoelace to rapidly rotate the spindle.

This produces its own tinder by pushing out particles of wood ahead of the friction.

Step One: Cut a groove in the softwood fireboard, then plough or rub the tip of a slightly harder shaft up and down the groove. The friction will push out dusty particles of the fireboard, which will ignite as the temperature increases.

The Iroquois invented this ingenious pump drill, which uses a flywheel to generate friction. The crossbar and flywheel are made of hardwood; the spindle and fireboard are made from softwoods (as in the hand drill).

Step One: Bore a hole in the center of a rounded piece of hardwood and force the spindle in so that it fits tightly. Select wood for the crossbar and bore a larger hole that will slide freely on the spindle.

Step Two: Attach the crossbar to the top of the spindle with a leather thong or sturdy shoelace.

Step Three: Wind up the flywheel so that the thong twists around the spindle, then press down. The momentum will rewind the crossbar in the opposite direction. Repeat until friction creates a glowing ember.

Of all the friction ­fire-starting methods, the bow drill is the most efficient at maintaining the speed and pressure needed to produce a coal, and the easiest to master. The combination of the right fireboard and spindle is the key to success, so experiment with different dry softwoods until you find a set that produces. Remember that the drill must be as hard or slightly harder than the fireboard.

Step One: Cut a notch at the edge of a round impression bored into the fireboard, as you would for a hand drill. Loosely affix the string to a stick bow, which can be any stout wood.

Step Two: Place the end of a wood drill the diameter of your thumb into the round impression, bear down on it with a socket (a wood block or stone with a hollow ground into it), catch the drill in a loop of the bowstring, then vigorously saw back and forth until the ­friction of the spinning drill produces a coal.

Step Three: Drop the glowing coal into a bird’s nest of fine tinder, lift the nest in your cupped hands, and lightly blow until it catches fire.

Human beings have been starting fires from sparks since the days of the cave dwellers of the Paleo­lithic era. It is still a vital survival skill for modern hunters and fishermen to learn. If conditions are wet or windy and matches are extremely difficult to light, a glowing spark in tinder uses wind to its advantage to burst into flame.

Striking the softer steel against the harder flint will produce sparks to flame your fire. The curved steel striker provided with flint and steel kits is easiest to use, although with some practice you can produce sparks by using the back of a carbon-steel knife blade. (Stainless-steel knives are usually much too hard to shave sparks from.) An old bastard file or an axe head will also work.

Step One: Grasp a shard of hard rock, such as flint or quartzite, between your thumb and forefinger with a sharp edge protruding an inch or two.

Step Two: Tightly clamp a piece of your homemade char cloth or a lump of birch tinder fungus under the thumb holding the piece of flint. Grasping the back of the striker, knife blade, or file in your other hand, strike a glancing blow against the edge of flint, using a quick wrist motion. If you’re using an axe, hold the head still and sharply strike the flint near the blade, where the steel is harder. Molten sparks from the steel will fly off and eventually be caught by an edge of the char cloth, causing it to glow.

Step Three: Carefully fold the cloth into a tinder nest and gently blow on it until it catches flame.

Another option is to use a magnesium-and-steel tool, which is an updated version of an ancient method that creates a strong shower of sparks. The advantage of this method is that the magnesium shavings flame briefly at an extremely high temperature, eliminating the need for char cloth or tinder fungus.

Step One: Using a knife blade or striker, shave a pile of magnesium flecks into a nest of tinder.

Step Two: Strike the steel edge of the tool with the back of a knife blade or the scraper provided to direct sparks onto the tinder.

Step Three: When the tinder starts to smolder, gently blow on it until it bursts into flames.

Fire making does not end with the birth of a red-hot coal, nor does a glowing char-cloth ensure that you’re going to get a flame. The coal or char cloth must be transferred to a bundle of fine tinder before being blown into flame. Good sources include dried grasses, lichens (including old man’s beard), shavings from the inner bark of aspen, poplar, and cottonwood trees (which burn even when wet), and windblown seed or fluff. The tinder bundle should be roughly the size of a softball and loosely formed to allow air circulation.

To blow the bundle into flame, make a small pocket in the center. Tuck the glowing coal or char cloth into the pocket, then loosely fold the edges around it. Next, pick up the bundle and gently blow on it. Once it has burst into flame, place it under a tepee formation of small twigs and add larger pieces until a strong fire has been established.

The only naturally ­occurring material that readily glows from a spark is tinder ­fungus, a corky brown deposit found under scars on birch trees. Don’t stake your life on finding any in a survival situation, though. Carrying char cloth in an emergency kit is a safer bet. To make it, cut strips from any 100 percent pure cotton material and set them on fire. After the strips have blackened but not yet turned to ash, stuff them into a lidded jar to smother the fire. Test your new char cloth by striking sparks onto it. A spot on the cloth should ­begin to glow, the glow holding and slowly spreading. If it doesn’t do this, make another batch.

An ideal tool for starting a spark-based fire, the striker should be made of flint for best results. If you can’t find flint, look for quartzite, which is much more common and is hard enough to strike sparks from steel.

Step One: Identify quartzite by the many crescent-shaped fractures on the surface.

Step Two: Choose a quartzite boulder that is flat or discus-shaped and drop it against a larger rock to chip off an edge. Round or oval rocks are more difficult to break.

Step Three: A flake broken from the quartzite boulder is usually sharp enough to use as a striker or knife. If you can’t find one to your liking, break the boulder again.

RELATED: The Mystery of Fire