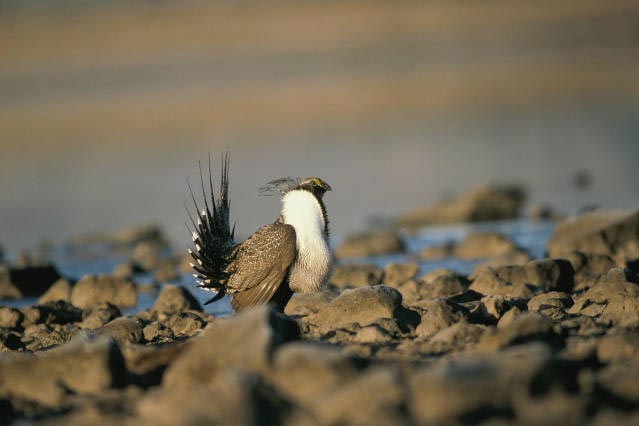 Most of us have heard about it by now: Secretary of the Interior Ryan Zinke has signed Secretarial Order 3353, “Greater Sage Grouse Conservation and Cooperation with Western States.” The media has rushed forward with cries of outrage, saying of Secretary Zinke’s order: “In one stroke, the action would open more land to drilling than any other step the administration has taken, environmental policy experts said. It drew immediate criticism from environmentalists while energy-industry representatives praised the move, saying that the earlier policy represented an overreach of federal authority.”

Okay, I’ll try to make this is as quick and painless as possible. What happened and what does it mean for hunters and fisherman and other users of public lands? This excellent short piece in High Country News is a good place to start.

The new order does indeed open up about 9 million acres of sage grouse habitat to potential development for oil and gas, with all of the new roads, invasive weeds, drill pads, and truck traffic that would entail. (It is worth remembering that the same areas critical to sage grouse are some of America’s best places for mule deer and antelope hunting, and are the home of 350 species of birds, wildlife and plants, some of which are found nowhere else.)

These lands were part of what were called “sagebrush focal areas,” the product of more than 15 years of work done by state and federal biologists to identify the best sage grouse habitat—nesting, feeding, and wintering areas, and dancing grounds (called leks) where mating birds engage in a bizarre ritual that has impressed human beings for as long as human beings and sage grouse have been acquainted. The Obama plan, signed in 2015, was the result of one of the most extensive and intense collaborations between the energy industry, livestock grazers, conservationists, and wildlife biologists in history. It was also the reason that the sage grouse—whose numbers have declined drastically over the past 50 years (I wrote about it 10 years ago here in Field & Stream)—was not placed on the federal Endangered Species List. The fact that the big, ungainly, and iconic gamebird of the Western sagebrush country was not officially listed as endangered, with all the land-use restrictions that would have followed, was viewed as a triumph by many. The states and the feds, industry and conservationists, all worked together in good faith, and a plan was hammered out that, it was believed, would ensure the future survival of the bird without the heavy hammer of the Endangered Species Act. The Obama plan was a hard-fought compromise; many environmentalists felt that it did not go far enough, and some energy industry advocates decried the restrictions on development in the sagebrush focal areas.

The Trump plan is, without a doubt, a gift to those energy-industry advocates who complained of overreach. Under the Trump plan, extensive protections remain on only about 1.8 million acres—which sounds like a lot if you are from East of the Mississippi, but is pretty small in the big open West.

Does this mean that the sage grouse will go the way of the American auk and the passenger pigeon?

No—at least not right away.

I called my old friend Steve Belinda, who is the Executive Director of the non-profit conservation group the North American Grouse Partnership. Steve and I go way back. He was a biologist for the Bureau of Land Management when I was reporting on energy development in the Green River country of Wyoming, and he left that job in protest at the helter-skelter, devil-take-the-hindmost brand of energy development on the public lands there. He is a pragmatist, and he directs a sagebrush restoration project for the Mule Deer Foundation that I have worked on for the past three years. We have had hundreds of hours of conversations about sagebrush ecosystems, big mule deer, antelope, sage grouse, and energy development over the years.

“None of this will have an immediate effect on the birds, or the big sagebrush country where they live,” Belinda told me. “Although the energy industry is leasing a lot of that identified core sage grouse habitat. Oil and natural gas prices are so low right now that there’s not much drilling going on.”

Belinda added that, while this is “a small gift to the energy industry,” the toss-out of the 2015 Obama plan sends a much larger message to hunters, anglers, and public-land users. “It is really just another example of challenging the role of science and collaboration in land management,” he said. “Yes, in the long run, there will probably be less sage grouse, and more energy development on these public lands, and I’m concerned about that. But the real message of Zinke’s order is that conservation is political. We have a top-down rollback of protections, a rollback that is incredibly polarizing. Chalk up another partisan victory. Toss out science and collaboration.”

This new rollback is very effective in creating a kind of chaos that benefits those who despise any regulations that protect wildlife or other public-land management policies that get in their way. “There will be new lawsuits filed, of course,” Belinda said. “A lot of work for pencil-pushers, a lot of time and money spent, and not much progress for sage grouse, or mule deer, or antelope.”

The order is part of the Trump administration’s stated goal of “energy dominance,” which is a step beyond the last push for opening up energy development on public lands and lessening protections for wildlife, when the catch words were, resonant with every one of us in the wake of the 9/11 attacks, “energy independence.” The new goal involves exporting our oil and natural gas into an insatiable global market, and when prices rise, as they will, there will be new roads and drilling rigs on these public lands, in the core sage-grouse habitat. At that time, there will be more lawsuits from wildlife advocates and environmentalists, demanding that the bird be listed as an endangered species, as almost happened in 2015, before the Obama plan settled the matter.

“That will result in more polarization,” Belinda said. Which, he points out, will empower those who would like to see the end of the National Environmental Policy Act, or the Endangered Species Act. “The attitude now is just issue these orders and let the lawsuits come at us. A lot of that is just wanting to challenge and change our bedrock environmental laws.”

Belinda said that he’d recently been told to “stop being so depressing,” but his work, with sage grouse and with the lesser prairie chicken (which lives in the southern Great Plains, and has declined by an estimated 93 percent over the past century) can be dispiriting. What keeps him going is one reason he and I have been friends for so long: He is an old-school hunter and a conservationist-biologist who genuinely loves the big sage country, and the sage grouse, mule deer, and antelope he hunts in that country.

“I don’t think we’ve ever really gotten through to people how important and beautiful the sagebrush steppe is,” he said. “The sage grouse are the canary in the coal mine of this landscape—the icon of some of America’s wildest public hunting country. I mean, if these lands were mountains or had timber, they’d be one of America’s greatest wildernesses. And the sage grouse is the icon of that. Some people seem like they’d be happy to see the sage grouse go, and to hunt antelope or mule deer off a road or a drilling platform. I’m not one of them.”