Tagging a public-land bull is one of the hardest things to do in all of hunting. Here’s how to increase your chances for success 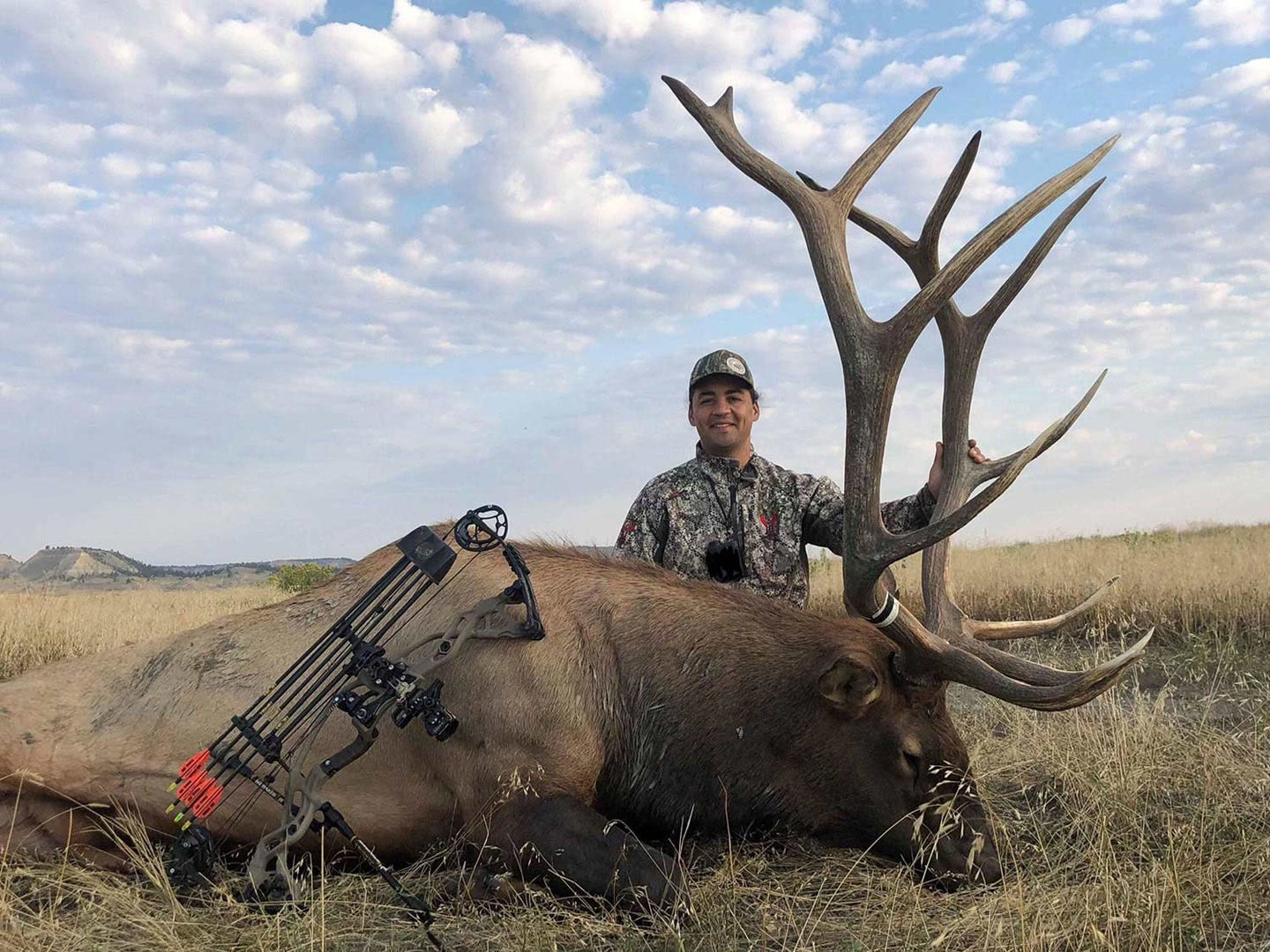 Whoever coined the adage, “knowledge is power,” must’ve been an elk hunter—because when it comes to this pursuit, the more information you have, the more tricks you can put up your sleeve, and the better your chances are of filling the freezer.

Here are nine tips and tactics provided by hunters who spend countless hours combing the West each fall in search of big bulls on public land. Each one is master of his craft, and the advice to come can be trusted to get you one step closer to tagging a public land bull.

1. Bugle Louder Than the Herd Bull

Jim Brennan is an elk nut, who has taken numerous bulls in several western states. He has a knack for winning on public land and doesn’t shy away from hunting over-the-counter (OTC) units. Aside from chasing his own elk dreams, Brennan spends the majority of the fall guiding clients.

“Some will look at this as an archery or muzzleloader timeframe tip, but it also works great during those early rifle seasons,” Brennan says. “Be rude. If you want to gain attention from another bull in the elk woods, you need to be rude. A herd bull loves to hear the sound of his own voice carry across a timbered canyon or alpine meadow. When that bull starts to fire off a bugle, don’t wait unit he is finished. Bugle right back over top of him. Most bulls will come unglued. They don’t want another bull interrupting their fall courtship.

“I have used this tactic a lot and have had very good success with it. Typically, a mature bull will come in looking to whip some butt, so be on your toes and be ready to draw or settle your crosshairs.”

Colorado hunter Jason Weaver is an amazing hunter. His ability to routinely tags bulls in OTC areas demands respect. To date, Weaver has taken multiple bulls over the 300-inch mark, all on OTC tags that he bought at Walmart.

“I typically have only a handful of hunt days to get the job done each fall,” Weaver says. “My hunting usually takes place in October, but regardless of when I go or what weapon I take, my tactics remain the same.

“I do my research and study my maps. I look for areas that will likely hold elk but aren’t super thick. Then, I like to let my optics do the walking for me. Too many guys bumble around in the woods bumping elk. I like to note multiple vantage points that allow me a solid view of the surrounding landscape. Then, I move from vantage point to vantage point until I find elk. Often, finding elk is the most difficult part of any OTC hunt. Buy the best glass you can afford, and be sure to have a tripod or some other system to keep you steady.”

J.C. Navarro may very well be the best elk hunter you’ve never heard of. On average, Navarro spends more than 30 days in the elk woods each fall, and during that timeframe, he typically calls in multiple bulls for himself—as well as for hacks like me. His largest bull to date breaks the 370-inch mark.

“I’ve never hunted elk on private ground, and I don’t plan to,” says Navarro. “My tip is really two-fold. First, you can’t be timid or scared. I talk to lots of guys each year who come West and stick close to camp or pick a location to hunt and refuse to leave even if elk aren’t in the area. Don’t do this.

“Instead, stay mobile. Get yourself a good GPS, and make sure you have an SOS system like the Garmin inReach. This way, if you get lost or, God forbid, get in a bad spot, you can get help. If elk aren’t in an area, move to another area and then another. Be relentless in your search. The OTC elk hunter has to have heart. If you keep studying your maps and moving to new areas, you will find elk.

“The second part of my tip is to go the extra mile. Pay attention to where other hunters are hunting. Take note of where guys are parking at trailheads and the like, and then look at a map. Most guys won’t wander too far from a trailhead or logging road. Pressured elk will seek out thick, dense, nasty terrain. Locate this type of terrain and go in.”

Royle Scrogham has shot eight public-land bulls in nine years of hunting. Impressive, I know. Even more impressive is that until this past year, before moving to Wyoming, Scrogham came West each fall from Kentucky.

“My biggest suggestion is to stay aggressive,” Scrogham says. “I believe more guys, regardless of what they’re carrying, get cement feet during crunch time. If a bull is bugling but is reluctant to come, close the distance. Don’t be content with setting up 300 yards away, listening to that bull scream at you time and time again.”

Scrogham likes to have a buddy keep the bull bugling while he slips through the timber.

“Go slow and keep your eyes up,” Scrogham says. “As long as the bull is still talking, he hasn’t seen you. Carry a wind puffer bottle in your pocket, and pay close attention to both the thermals and the wind direction. You can’t be afraid to move on elk. Fear of getting spotted will cause you to miss an opportunity.

“The same holds true if an elk isn’t talking but you can see him or know the small, isolated patch of timber he went into. Use the terrain and move in. If you’re toting a rifle, you may only have to close a small distance to get into range. Get a plan together and get moving.”

5. Don’t Hesitate to Put Another Round in a Bull

Scrogham would have been flat scary if he’d been alive during the era of quick-draw gunfights. I’ve never hunted with a man that can load and shoot so fast. If a bull is still standing after the initial hit and he can fire another arrow or bullet, Roy is going shoot.

“Elk are stupid tough,” Scrogham says. “If I make a shot, even if I know its fatal, and the bull is still in range, I’ll get another arrow or round in him. You don’t want a rodeo. You don’t want to be tracking an elk for miles and miles across rough country. If a bull is on his feet, put another one in him.”

Read Next: 31 DIY Tips for the Ultimate Elk Hunt

“I like to locate and watch elk for a morning and an evening. If you can find elk that aren’t being bothered and are content, you’re in the chips. After peak breeding has taken place, a mature bull will typically stay with his cows for a bit of time as long as he’s not being pressured. Those elk will get into a feed-to-bed pattern. Discover the pattern and go kill your bull.

“Later in October, a big bull will typically leave his cows and find solitude. Just like a post-rut buck, a post-rut bull will be looking to eat, sleep, and stay alive. Typically, mature bulls will seek out an area that is dense, thick, and steep. The area needs to have food and water. Steep, open avalanche shoots close to thick timber are great spots to locate post-rut bulls.”

7. When the Moment Comes, Be Ready

My friend Tim Kent lives in New York, but each fall, he travels West to hunt elk on public land. Tim is a grinder and provided a tip few people think about:

“Be ready,” says Kent. “Your opportunity for an elk will typically be there and gone before you know it. Be ready mentally to take advantage of the chance. Stay focused. If you’re calling to elk, know where your shooting lanes are and pop them with your rangefinder. If you’re moving in on a bull, pay attention to the woods. Listen for any sound that might tip you off to the fact that you’re getting in tight. Too many hunters, when the moment of truth is about to present itself, have a brain fart. Basically, they black out. You can black out and freak out after you tag your bull, but until he’s down, stay in the game.”

The time it takes Kent to travel from New York to hunt destinations like Idaho and Colorado is considerable. His financial investment is steep, and the time away from his family is extended.

“For me, it’s not a vacation,” Kent says. “If you want to find regular success, you have to go into the hunt with this mindset. If you look at it as a vacation, you’re doing yourself a disservice. You’re also doing a disservice to your family and your hunting partners. In my opinion, tagging out on a public-land bull is the hardest thing there is in the world of hunting. It should be taken seriously. Prepare mentally and physically ahead of time and go into the hunt expecting success. And when you get that one opportunity that you’ve worked so hard for, execute.”

9. Give Yourself Enough Time to Succeed on an Elk Hunt

I don’t claim to be an elk whisperer, and while I’ve enjoyed success in the elk woods with both firearms and archery gear, it’s typically been because of one reason: I’ve given myself time to succeed.

I recommend taking 10 days for your hunt. Two of those days can be travel days, but you want eight hunt days. I realize with work and family obligations, this amount of time isn’t always possible, but the more time you give yourself, the more successful you will be. Plus, you will need to take an off day. My hunting partners and I like to run into town, do laundry, shower, and eat a good meal. This really helps morale.