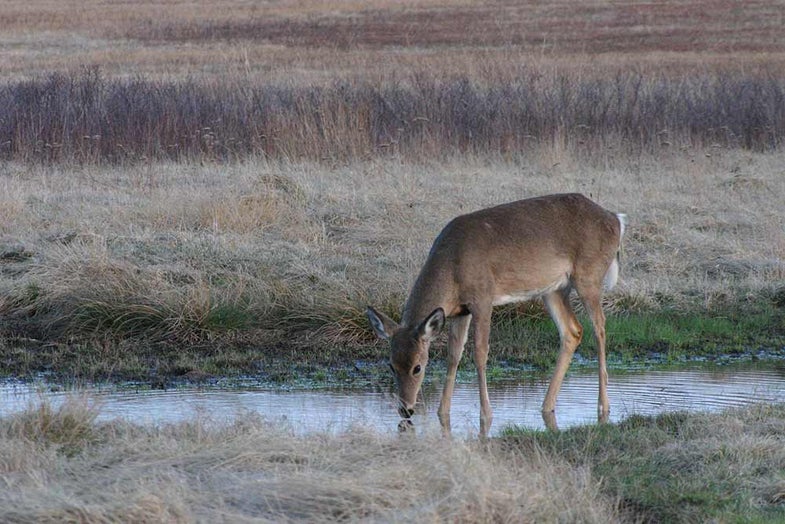 A team of 11 government and university researchers has devised a new method for the more efficient and effective detection of Chronic Wasting Disease (CWD), which currently plagues deer, elk, moose, and caribou populations across 24 states in the U.S. Their study was published in the Journal of Applied Ecology in June. “There aren’t any real good, definitive management actions that have been shown to actually clean up CWD,” notes Dr. Daniel Walsh, a co-author of the study and a quantitative ecologist for the U.S. Geological Survey’s National Wildlife Health Center. “But if there is going to be a chance of that happening, it’s going to be if we can detect the disease early. That’s where this technique is most useful.”

First, a Refresher: What Is CWD?

Chronic wasting disease was first discovered in captive deer in Colorado in 1967, and has since spread to wild deer populations as well as other to other species of cervids across the country. CWD is an infectious disease in the transmissible spongiform encephalopathy (TSE) disease family, of which mad cow disease is the most well-known. Scientists don’t know exactly how it originated in deer. Infected animals don’t display outward signs at first, but the neurological damage caused by CWD always leads to death. Research has found that CWD is spread between animals through fecal matter and infected environments. This has led wildlife managers to impose restrictions on carcass movement, use of urine-based attractants, and the feeding of free-range deer in certain areas.

Though some people are still skeptical of CWD, research definitively shows it’s impacting not just individual animals but entire cervid populations on a large scale. For example, Wisconsin’s whitetail population and Wyoming’s mule deer population have both seen significant decreases due to CWD, and the reach of CWD continues to grow and spread, both geographically and within populations, at an alarming rate. CWD also afflicts mature bucks at a higher rate than it does the lesser game targets of does and young stags. “Since CWD is invariably fatal, this could have a significant impact on opportunities to harvest trophy animals in the future,” says Walsh.

So far, there is no evidence that CWD can be transmitted to humans, though it has been transmitted to two species of nonhuman primates in a laboratory, which signals a small chance for human contagion. The Center for Disease Control and Prevention (CDC) recommends not eating infected animals and otherwise eating muscle meat, not brain and lymphoid matter. Hunters play a key role in combatting the spread of the disease, too.

“The biggest thing hunters can do is turn in the heads of their kills for CWD surveillance, particularly in areas where management agencies are trying to get a handle on where the leading edge of CWD has gone,” says Dr. Jenny Powers, another co-author of the study and the acting branch chief of the National Park Service Wildlife Conservation Branch. “If states are asking for voluntary submissions of heads, we strongly encourage hunters to do that.”

How Have Experts Been Trying to Control CWD up to Now?

Since its discovery, CWD has spurred extensive efforts to monitor its spread. State agencies regularly enact costly surveys of deer populations to check for the prevalence of the disease. This requires putting people on the ground to collect samples (from hunters, predator-kill sites, road kill, or through other means), sending their samples in for testing, and then safely disposing of infected heads. This method is neither very efficient nor effective, because it involves taking a random sample of deer off of which scientists base an estimate for the prevalence of CWD. It’s also expensive: An estimate for a survey requires approximately 300 samples, and if each sample costs the typical $75 (though the cost-per-sample differs depending on the agency and collection methods), the total for a survey runs approximately $22,500. And because it takes a significant amount of time to gather so many samples, that doesn’t bode well for detecting CWD while there is still a chance to mitigate its spread. Wildlife managers use different techniques to try to limit CWDs growth, from quarantining and culling animals to utilizing other precautionary measures like controlled burns, but none of these have conclusively proven to be effective.

“Almost always, with the exception of New York State, once you detect CWD, there is already a lot of it in the environment,” says Powers. “That’s when it becomes nearly impossible to eradicate it.” In New York, wildlife managers were able to successfully stop CWD’s spread into the state—most likely because of the disease was caught early, and scientists responded quickly. This early detection is where this study comes in.

How Is the New CWD-Detection Method Different?

Previous methods for identifying CWD were based on random sampling. In this new study, researchers employed weighted sampling—and that has been the reason for the method’s efficiency. The researchers assigned different “weights” to each subpopulation of deer depending on how proportionally indicative each one was in demonstrating the prevalence of CWD. For example, sick-looking adults had the highest probability of having CWD and therefore were assigned the highest weights, while fawns had the lowest risk of having CWD and were assigned very low weights. The researchers used 90,212 samples taken from the whitetails in Wisconsin’s CWD management areas between 2003 and 2010 to determine these weights. They then successfully tested their detection method in a survey of the whitetail population of Shenandoah National Park.

This approach of weighted sampling allows wildlife managers to decrease the overall number of deer they would need to sample, resulting in faster detection and critical cost savings. (The study’s authors couldn’t include specifics about the cost savings, because they depend on the cost-per-sample and the different proportions of subpopulations represented in any given survey.) This study is an incremental improvement on other forms of weighted sampling methods that have also been used in the past, but unlike these past methods, this study’s approach measures for uncertainty within its complex statistical calculations. This provides for a significantly higher level of precision—which is an imperative when expensive, high-stakes wildlife management decisions are being made.

The study also included the development of a practical web application for wildlife managers to use. After plugging managers plug in their samples, the application makes a high-confidence determination of the prevalence of CWD in the landscape. Moreover, the application constantly updates with each sample that comes in, which helps managers determine how many more samples are needed to reach their surveillance goals—and eliminates the collection of costly unnecessary samples. In sum, the application gives you a very good idea of whether CWD is in your landscape as soon and as cheaply as possible.

Moving forward, Walsh sees several key areas for further CWD research. “There needs to be a focus on measuring the effects of management actions,” he says. Unfortunately, this hasn’t happened yet, because trying to immediately mitigate the spread of CWD is so pressing that wildlife agencies can’t afford to use any wild deer as “control groups,” which would be left without any CWD management actions, to compare the effectiveness of their efforts against. Collaboration between different state agencies is being explored as a workaround to this dilemma.

Beyond that, Walsh thinks there should be additional research on limiting CWD transmission in the environment. This continued scientific attention is especially important because, unlike other diseases, CWD appears to have a particularly long epidemic curve, which means it could take up to 100 years for the disease to run its course. In other words, CWD may still be in its early stages—with the worst yet to come.

“As a hunter myself, I am worried we are going to have large declines in cervid populations if we see an epidemic curve that goes to the height that some of our predictive models say it does,” Powers says. “That’s not necessarily going to happen to all populations, but we are starting to see it in localized areas. The most important thing for me is to see healthy cervid populations into the future.”