Thoughts on fearless turkeys, a 6.5 Creedmoor load, and my SIG Sauer rifle 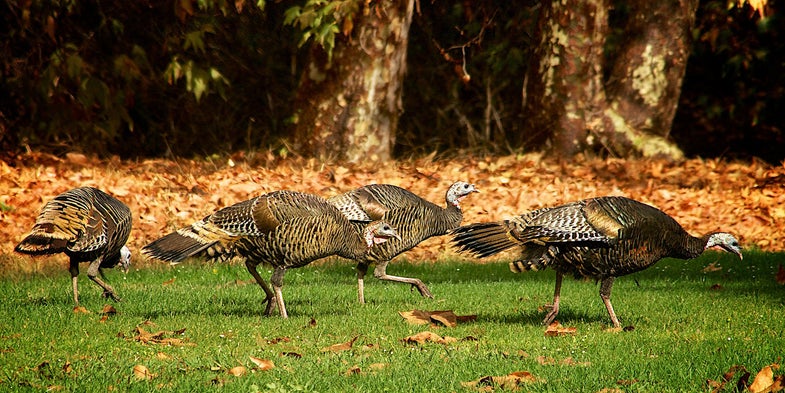 One of the truths I believe I’ve learned is that most animals are not spooked by gunfire. Other things, such as our scent, or the unique clomp clomp clomp we make as we stomp through the woods scares the hell out of them, but I believe that most of them perceive a rifle report as just another annoying loud noise.

On more than one occasion I’ve shot one of several browsing deer and have had the survivors look at the recently departed with mild curiosity and then go back to what they were doing. Or I’ve watched a herd of critters catch the sound of a gunshot. Some of them flinched, and a few ears went up, but that was about it.

I got my latest demonstration of sound indifference two weeks ago when I was shooting in an AR Tactical match at 500 yards. AR Tactical is for MSRs that are set up for military or tactical use as opposed to competition. The scope can be no more than 12X, the trigger no less than 4 pounds. You can’t use a rabbit-ear rear sandbag, and you have to use a bipod rather than a mechanical rest. It’s a lot of fun, and you get to see what your rifle is worth beyond 100 yards.

The club where I shoot has a flock of turkeys (or maybe several flocks) that live on its grounds, and they see people and hear gunfire all the time. We had maybe 10 people on the firing line at the AR match, shooting for all they were worth, and over the side berm came a herd of birds, pecking away for all they were worth. They fed right past the line of shooters, paying absolutely no attention. Since the match was at 500 yards, the bullets were probably passing 10 feet over their heads, but even so, the supersonic cracks of their passing must have been fierce. It made no difference, and one of the sights I will treasure is the bottom half of my scope filled with turkeys, and the top half with a target in it. There are plenty of things you have to be careful about while hunting, but gunfire, I believe, is not at the top of the list.

And, on the subject of competition: Everyone and his half brother now has a 6.5 Creedmoor competition load. Some of them shoot and some do not. One that does is the brand-new 6.5 target ammo from SIG Sauer. It’s called Elite Performance, and it’s loaded with 140-grain Sierra MatchKings. I shot it in my Savage Stealth, of which I shall be writing more shortly, and got round, sensuous groups, .600-inch with no fliers.

Good stuff; you could compete with it.

And: My MSR is the older model SIG Sauer 716 DMR (which stands for Designated Marksman Rifle). It’s a 7.62 that weighs 15 pounds and change with a bipod and a big Nightforce scope on it. It’s a gas-piston gun, and is guaranteed to shoot sub-MOA, which I’ve found it will do, usually putting five shots in .700 and change.

But I’d never tried it beyond 300 yards, and when I shot it at 500, I scored 396×400-16X. This is not to point out what a hell of a shot I am (I came in third, by one point) but to exalt the gun. It was competing with not only factory rifles, but with a number of hand-built ARs that were probably worth $4,000 or more if you could count all the work that went into them.

After the shoot, one of the competitors who builds his own competition guns asked to look it over. He has some very sophisticated training as a machinist, and when he handed the SIG back he said, “This is really put together. I mean, this is really nice work.” A couple of days later he hunted me down and said the same thing again.

The SIG is not cheap but it’s built like a Rolex, or maybe a Patek Philippe. The new model 716 DMR is 2 pounds lighter, and probably shoots a bit better.

You get what you pay for.