How to Use Iron Sights on a Rifle

Quality iron sights are simple, lightweight, and surprisingly accurate out to 200 yards. Here's your guide on how to use iron sights 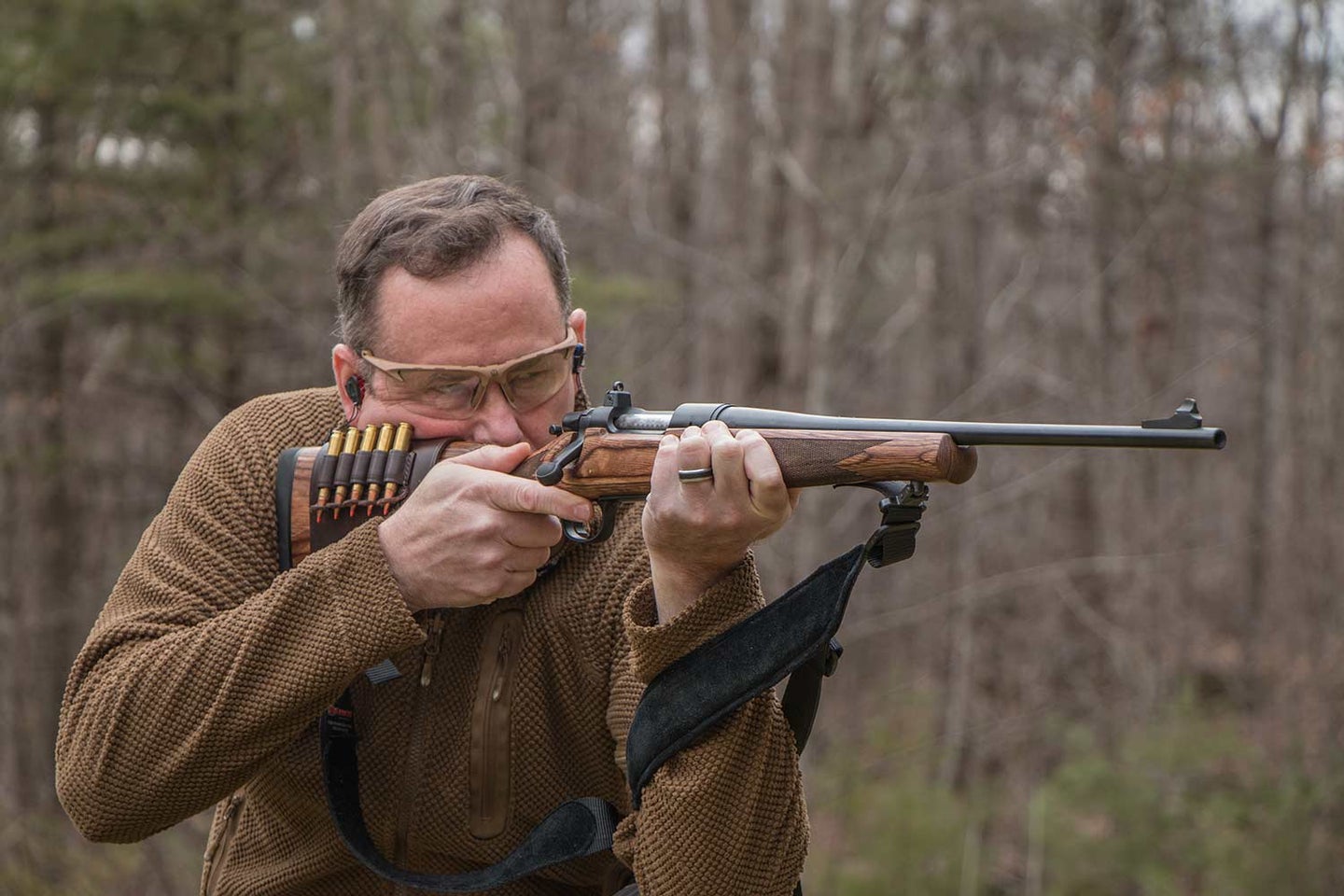 I got interested in guns in the early 1950s, at just about the time that scopes were being generally accepted. They were, for the most part, wretched objects—difficult to mount, dim, and fragile, with adjustments that had a sense of humor. Rifle stocks were designed so you could use either a scope or learn how to use iron sights, and they worked well with neither. Gun makers, in order to deal with scope-failure anxiety, equipped their rifles with miserable iron sights. The variable scope was regarded with extreme and justified suspicion. Prudent riflemen used fixed 4Xs.

Today, rifle scopes are inconceivably better than what was around in the ’50s. Even the U.S. military has gone to the ACOG, which is an optical sight, after a century of iron. (The fact that we expended 250,000 rounds of small arms ammo per casualty inflicted in Afghanistan and Iraq, and had to buy it from Israel because we ran out, may have had something to do with the decision.)

So, are iron sights obsolete? No way. Not only are they very much alive, but they’re as much improved as scopes are. Here are the advantages and disadvantages of using these rifle sights, a guide to choosing the best iron sights for your shooting, and how to use iron sights for the best results.

How to Choose the Best Iron Sights For Your Needs

There are two categories of iron sights: those for general use and those for speed shooting. We’ll start with the first.

The Best Sights for General Use

For general use, which includes backup to a scope, there are two designs that excel. The first is the blade front sight used in combination with a rear peep. If you’re interested in really precise shooting, you want a blade that’s square across the top, because it doesn’t fade or blur as does a tapered post. Skilled target shooters can use a square blade for a form of Kentucky windage. You’ll hear the expression, “half a blade left,” or “a quarter-blade right,” meaning the shooter is compensating for the wind by holding off-center by a half or a quarter of the front sight’s width. It’s fast, and precise, but you have to practice.

The other sensible choice up front is the fiber-optic sight, which is far more visible than a blade. The most common colors are green, red, orange, and yellow. I find that bright green or dark orange work best. The drawback to fiber optics is that they’re pretty fragile.

This brings us to the next front-sight consideration: Whatever the actual sight, it has to have some sort of protection from bangs and hard knocks. The military solution, for many decades, has been steel “wings” on either side of the sight. You can see these on the front sight of the Ruger Gunsite Scout.

For fiber-optic sights, the best protection I’ve seen, and which I use on both my heavy rifles, is the Masterpiece Banded Ramp-Window Hood made by New England Custom Gun Service, Ltd. (NECG).

(A digression: NECG is the go-to source for anything having to do with iron sights for hunting rifles. They have scores of front sights, ramps, hoods, and rear sights, both open and peep. The tactical counterpart to NECG is Troy Industries, which specializes in backup sights for ARs. They are of very high quality, extremely well thought out, and the prices are less than one would expect.)

The Window Hood has two large cutouts that admit light, so you don’t have to remove it to aim a fiber-optic sight. While hunting buffalo in Zimbabwe in 2017, I whacked the muzzle of my .416 against a tree and deformed the Window Hood, but the sight underneath survived, and I was able to bend the hood back into shape.

For a rear sight, for all-around use, the best choice is the ghost-ring aperture. The ghost ring, which Jeff Cooper loved and promoted, is nothing more than a peep sight with an oversized aperture. Sighting with it, your eye registers the aperture only as a “ghost” image and unconsciously centers the front sight in it. You have, in effect, reduced the number of focal planes you have to deal with by one-third.

A good ghost-ring sight is small, unobtrusive, and adjusts for elevation and windage. It should also be very tough. Once you sight it in, you do not touch it unless you change ammo. If you’d like to see an exemplary selection of ghost rings, go to the NECG site.

The Best Sights for Speed Sighting

For understanding how to use iron sights for speed sighting, we turn to our good friends the professional hunters of Africa, who sometimes have to shoot fast or die. I’ve handled a good many of their backup rifles and noticed a high degree of unanimity in what they do and do not use, namely:

No scopes. (One masterful builder of heavy rifles flatly refuses to mount a scope on any of his hard kickers. They break, he says. He once sent me a .404 to shoot. Because it’s not a terrifically hard kicker, he’d been talked into mounting a scope on the rifle. When it got to me, the scope was busted.) No red dots. No holograms. No peep sights. Over the course of more than a century, PHs have found that the combination that works best for them is a big bead up front and a shallow rear V.

The best material for the big bead is gold or ivory. Warthog ivory is better than elephant ivory, as it’s finer-grained and doesn’t yellow over the years.

The traditional open rear sight is a shallow V, and the good ones often have a vertical line of gold or silver inlaid in the steel that runs from the base up to the bottom of the V notch. The really good ones have a gold triangle that does the same thing. In use, you put the bead on the notch, pull the trigger, and concentrate on not wetting yourself.

Serious, working rear sights of this type are designed never to move once they leave the factory, where they are “regulated” for a particular make of ammo and bullet weight. The reason is that most PHs subject their rifles to a fantastic amount of abuse, some unavoidable and some not, and an unmovable rear sight is about the only thing that holds up.

Be aware that there are open rear sights called “express sights” that have folding leaves for ranges past 100 yards. These are a superb waste of money, as dangerous game is almost never shot from beyond 100 yards, and usually much closer, and the useless little leaves have a habit of folding flat whenever they feel like it. An open rear sight is properly set to hit dead on at 100 yards, or 50 yards, and then left strictly alone.

How to Use Iron Sights as a Backup

If you want to learn how to use iron sights as a backup to a scope, you must devote some thought and prayer to getting the scope off the rifle when it gives out. This is why quick-detachable, or QD, mounts were invented. Almost all of them clamp to a base or a rail via levers. Talley makes excellent QD rings, as does Leupold, which calls them QRW2. There are a number of less-expensive rings designed for rails and for Weaver-style bases. They all work fine.

The thing to remember is that it pays to tighten the levers with a light touch. Don’t go bashing them. If you decide to get them good and tight by tapping with a hammer, then you’ll need a hammer to get them off, and if you don’t have one handy in the heat of combat, you’ll need to use a rock. Tighten with your fingers, and every morning, just after tea, check to see that they’re still tight.

Probably the greatest testament to iron sights is that for a century, they were standard on every military rifle made, which is millions and millions. There were never any complaints about them. They worked under the most horrific conditions imaginable. They’ll do the same for you.

Pros of Iron Sights for Hunters

Cons of Iron Sights for Hunters