Rifle Inaccuracy: When to Say Goodbye to Your Gun

So we were talking about load testing and it raises the question, when does the point come where you have... 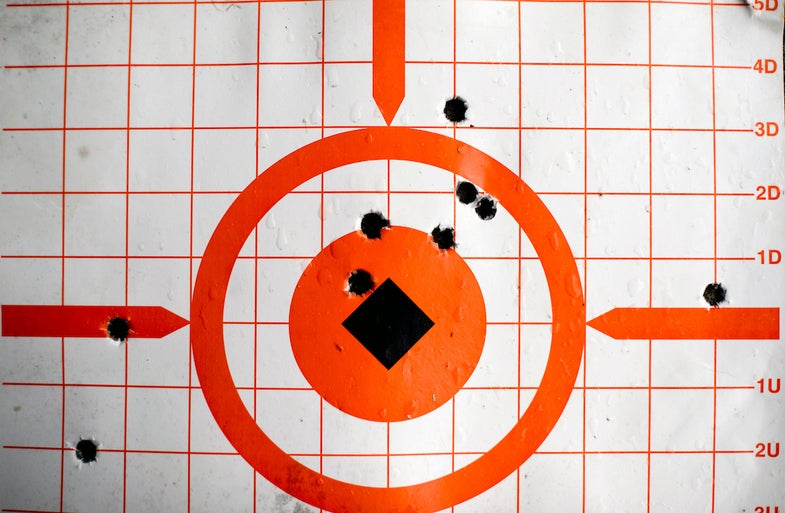 So we were talking about load testing and it raises the question, when does the point come where you have to say: “Enough experimenting. This rifle does not cut the mustard. Down the road it goes.”

As a rule, any rifle that’s going to shoot well is going to do so from the first three rounds you put through it. Either something you feed it is going to group right at the outset, or the rifle will fire occasional good groups with a couple of flyers, but you’ll see it trying to do its best.

An inaccurate rifle will spray them all over the target, right from the outset. Nothing you feed it will group consistently. If this happens, nine times out of ten it’s not worth what it costs to fool with it. If it’s a high-quality gun or is a good used rifle with no signs of abuse, before you sell it, it’s time to round up the usual suspects.

First, check the scope. Some years ago D’Arcy Echols kindly lent me a .404 to test. No one builds better rifles, and damned few people build them as good, but I could not hit the target with this one. As it turned out, the scope, a highly reputable one, was the culprit.

Check the bedding screws. It can be something as simple as this. I once got a rifle from a maker who puts his guns together personally in a small shop, and what he makes, shoot. This one shot OK; maybe 1 ¼”, but no great shakes. The reason was not that that there was a loose bedding screw, there was no rear bedding screw. When I installed one, the rifle immediately turned sensational, and became one of the most useful guns I’ve ever owned.

If you have a used rifle that won’t shoot, check the bore with a bore scope. There are an amazing number of people who are content to shove the occasional oily patch through the barrel and let it go at that, neglecting the copper fouling that builds up and up. One rifle maker friend of mine tells me that over the years he’s gotten who knows how many calls from people who bought a gun from him and it shot fine, but now it won’t.

“Send it back,” he says, knowing in advance what the problem is, and he gets out the cleaning rod and the polishing flour and spends an hour of elbow grease and the rifle shoots like new again.

Some rifles are very, very fussy. Back in the 1980s, I got a .270 from Joe Balickie that was built on one of the very rare left-handed Mauser actions that P.O. Ackley imported from Japan. It was a lovely gun, but it would not group. I shot it, and shot it, and shot it, but no dice. Then, in a frenzy of despair, I tried a powder called Hodgdon 205, which burned about like IMR 4350, and all of a sudden I could hit dimes with the rifle.

At about that same time, Kenny Jarrett built me a .338 that had an interesting past. It was originally a Remington 700 in 7mm Remington magnum that I had rebarreled to .338 and re-stocked. It shot just fine until a pinhole knot in the fore-end decided to grow, pressed on the barrel, and caused it to shoot poorly. So I gave it to Kenny and told him to use the stock for kindling and screw in a Schneider barrel, better than which there is none, and bed it in a McMillan stock, since fiberglass is not troubled by pinhole knots. As part of his process, Kenny blueprinted the action, and by the time he got both locking lugs to seat evenly, the bolt had set back so far that it wouldn’t close, so they had to cut off the bolt handle and re-weld it farther forward.

Finally, after all this Sturm und Drang I got my rifle, and it was a beaut. Part of Kenny’s standard procedure is to work up a load for each rifle he builds, but I always insisted on doing that myself since that was part of the fun. Except this rifle wouldn’t shoot.

Then, one day, I added ½-grain of IMR 4831 to a load that would not group and it was like someone had thrown a switch—there was a spread downrange you could have covered with a dime.

Another .338 did defeat me. It was built by the late David Gentry of Belgrade, Montana, a gifted craftsman who made his own Mauser action. I shot it for a whole summer; I even had it rebarreled, but no dice. I finished three months of steady shooting walking in circles and muttering in tongues. Finally, I had to admit the thing had me foxed.

The morals of these tales are, first, if it’s a good gun, don’t give up on it prematurely. The second is, that if you handload, you can pursue this process of trial and discovery comparatively cheaply, except for the bullets, which can add up. If you don’t handload, you’ll find that getting a temperamental rifle to perform can get very expensive very fast, and you may have to settle for less than wonderful results, or give up on a jewel before you find out it’s a jewel. As I’ve been saying for years, if you don’t handload, get help. You may have a rotten brain.

Some rifles simply will not shoot. Kenny once told me that when he used Other People’s Actions to build his guns, he’d get two or so a year that would not cooperate. First, they’d rebarrel. Then they’d restock and re-bed. If that didn’t work, they’d cut the action in half.

If you do sell a rifle that’s lacking, and it’s to a friend, or a dealer whom you hope to do business with in the future, be honest. The friend may not be as fussy as you are, or may not be a very good shot to begin it. The dealer will eventually be able to sell your gun to someone who will doubtless be happy with it. Just so they know. Some time back I sold a very good .223 to Kittery Trading Post, and took pains to point out that it had been made in the 1980s when all good .223s had 1-14 twists, whereas now the rage is all for 1-7 and 1-8. Anyone who tried to shoot 60- or 70-grain bullets in that rifle would not be happy with it, even though it’s still very accurate with 50- and 55-grain bullets. If they know in advance, no one will be disappointed.

Honesty is the best policy. It will amaze some people and confound the rest.